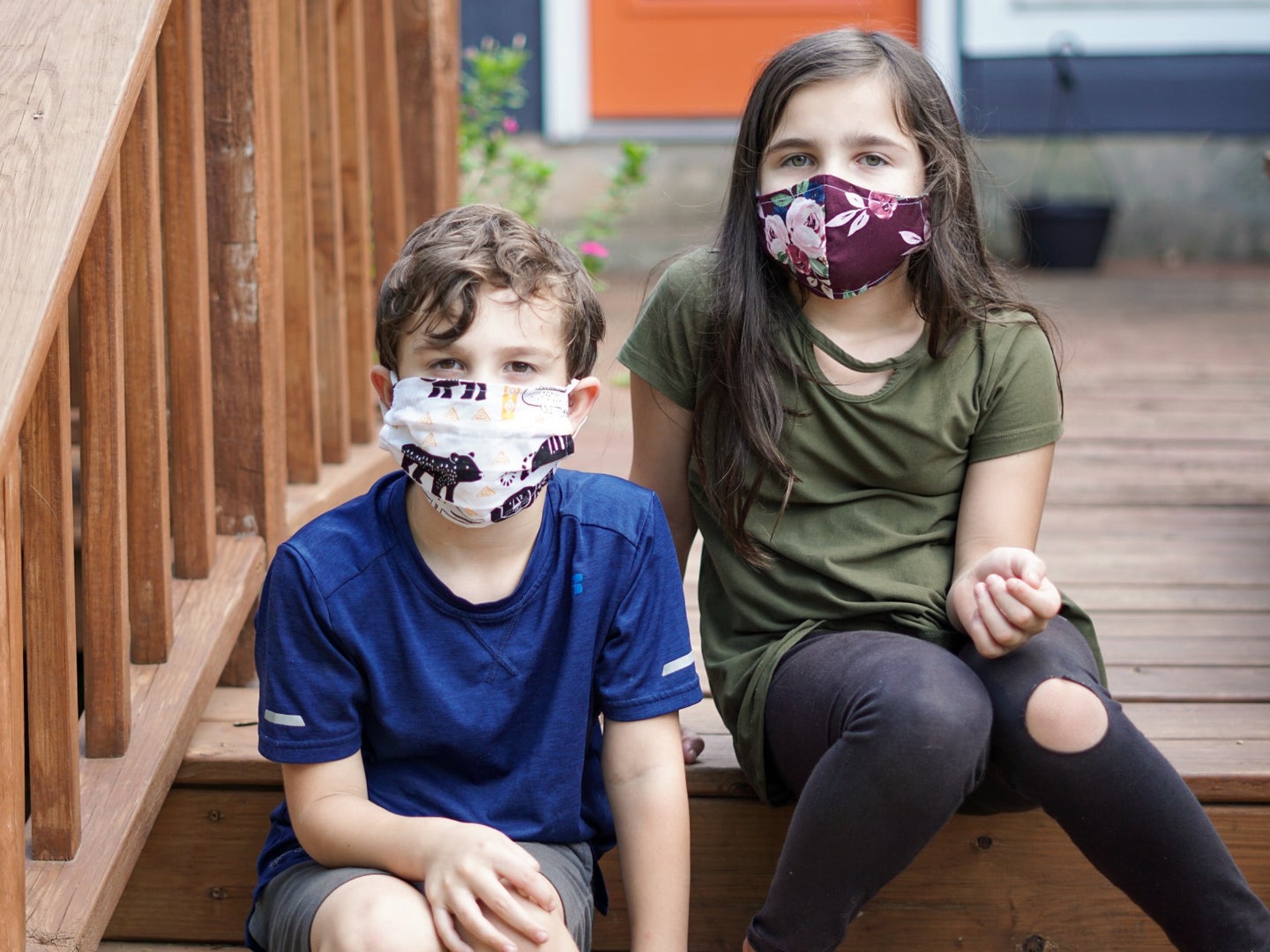 The highly contagious delta variant of the novel coronavirus is contributing to the surge in cases, especially in areas with low rates of vaccination. Unsplash
SHARE

As the new school year begins, COVID-19 cases are continuing to climb in both adults and children in the United States. In a conversation with Fox News Sunday this week, the director of the National Institutes of Health said that he is concerned about the uptick in pediatric cases.

“I think traditionally people kind of considered, ‘Well, you know, kids aren’t going to get that sick with this,’” Francis Collins, the agency’s head, said in the interview. Since the pandemic began, he says, “more than 400 children have died of COVID-19. And right now we have almost 2,000 kids in the hospital, many of them in ICU, some of them under the age of four.”

This means that “kids are very seriously at risk,” he said.

The highly contagious delta variant of the novel coronavirus is contributing to the surge in cases, especially in areas with low rates of vaccination, and emergency approval of vaccines for children under 12 may still be months away. However, researchers and physicians have seen since the pandemic began that kids are less likely to become seriously ill than adults who catch COVID-19.

“It’s important to remember that the risk of hospitalization and death is still quite uncommon in children,” says Diana Lee, an assistant professor of pediatrics at the Icahn School of Medicine at Mount Sinai. “We need to be wise in how we’re gathering with people and taking the appropriate precautions to try and prevent spread, but also not panic despite the increase in cases that we’ve seen recently.”

Here’s what we’ve learned about how COVID-19 affects children and what can be done to protect them.

How many kids are getting sick with COVID-19?

A recent report from the American Academy of Pediatrics and the Children’s Hospital Association found that over 4.41 million children in the U.S. had tested positive for COVID-19 as of August 12, representing 14.4 percent of all cases since the pandemic began. (And for the week ending on August 12, kids accounted for 18 percent of the weekly COVID-19 cases.)

The report, which drew on state-level data, also noted that after an early-summer decline, pediatric COVID-19 cases have steadily increased since the beginning of July. During the week of August 5 to August 12 alone, more than 121,000 cases were reported in children.

As schools reopen, kids may have more opportunities to be exposed to the virus, says Gary Kirkilas, a pediatrician at Phoenix Children’s Hospital. And, while the proportion of U.S. adults and teens are fully vaccinated continues to grow, children who aren’t yet eligible for COVID-19 vaccines remain vulnerable to infection.

“Now with kids returning to school after a year and a half of the pandemic, some of the mitigation methods are being pulled back, and parents and kids are getting a little tired of the mitigation methods,” he says. “And then you add that to the fact that delta is much more contagious; that adds to the reason why we’re seeing a lot of these cases.”

Most kids who catch COVID-19 are asymptomatic or only experience mild symptoms such as a fever and cough, Kirkilas adds. The American Academy of Pediatrics report indicates that, among states with available data, children have made up only 1.6 to 3.5 percent of total hospitalizations due to COVID-19, and between 0.2 to 1.9 percent of all pediatric COVID-19 cases led to hospitalizations. Seven states reported no deaths in children from COVID-19, and overall between zero and 0.03 percent of children with COVID-19 died.

Still, the Centers for Disease Control and Prevention has noted that hospitalizations among children have been on the rise in recent weeks. On August 14, the number of children hospitalized with COVID-19 in the U.S. hit a record high of 1,902, with children currently making up 2.4 percent of the nation’s COVID-19 hospitalizations, Reuters reported.

What we still don’t know

At this time, the American Academy of Pediatrics emphasized in its report, the available data indicate that it’s unusual for COVID-19 to lead to serious illness or death in children. “However, there is an urgent need to collect more data on longer-term impacts of the pandemic on children, including ways the virus may harm the long-term physical health of infected children, as well as its emotional and mental health effects,” the organization wrote.

Some experts are concerned that the delta variant may be making children sicker than previous versions of the virus. However, Kirkilas and Lee say, there isn’t enough evidence yet to know whether the delta variant is more likely to cause severe illness in kids.

“If you look at the numbers, you might conclude that it does because more kids are being hospitalized,” Kirkilas says. But this may turn out to be largely because the delta variant spreads more easily than the original virus, he says. “When something is more effective in being infectious, likewise that small subset of kids who are going to require hospitalization will naturally increase—not necessarily because it’s causing more severe disease, just because more kids are simply getting infected.”

In rare cases, COVID-19 has been linked to a serious condition called multisystem inflammatory syndrome in which different organs such as the heart or brain become inflamed. This may occur weeks after a child has been infected, and as of late July the CDC has received reports of more than 4,400 children who have been diagnosed with the condition (which is known as MIS-C in children). Scientists are still working to understand why some children or adolescents develop MIS-C while others don’t.

“Once we can better understand the mechanism [behind it], that helps us to develop more direct treatments and more direct interventions for these conditions,” Lee says.

Similarly, researchers still aren’t sure why some kids develop long COVID or how quickly they will recover. The condition can involve a range of lingering and debilitating symptoms such as brain fog, headaches, and fatigue.

“It can be confusing; is it the virus that’s causing it? Is it the body’s response, the inflammation?” Kirkilas says, adding that stress may also contribute to some symptoms.

Fortunately, recent research does indicate that long COVID is uncommon in children. One study of British children found that 4.4 percent of those with COVID-19 deal with symptoms lasting four weeks or longer, and 1.8 have symptoms that last eight weeks or longer. By contrast, an estimated 13.3 percent and 4.5 percent of adults, respectively, have symptoms that last at least four or eight weeks.

Another remaining question is how contagious children—especially asymptomatic ones—with COVID-19 are, Kirkilas says. One report published August 16 in JAMA Pediatrics indicates that even babies and toddlers can transmit the virus. Estimates for the proportion of infected children without symptoms range from 16 to 50 percent, Kirkilas says, and pinning down this number would help scientists determine the extent to which children spread COVID-19.

Indirect effects of the pandemic on kids

One thing is clear: The pandemic is taking a toll on kids. The emergence of COVID-19 has had a ripple effect on children’s lives, Lee and Kirkilas say, leading to a host of challenges even in those who haven’t caught COVID-19. These include mental health symptoms such as anxiety and depression, interrupted education, and delayed care for other medical issues. Many kids have been deprived of meals normally provided by schools and the chance to socialize with their peers.

“Traditionally people thought…that school was a place where the teacher sits you down and you learn about math and reading and grammar, but I think this pandemic has really brought to light the fact that school is much more,” Kirkilas says. “It was very visceral, where you’d see kids coming in [to the clinic] complaining about feeling down and depressed; more often than not, the only thing you could tie that to is the fact that their whole life routine was abruptly changed.”

Now that many children are returning to school, they will face crowded indoor settings that are “sort of the perfect setup for spread” of COVID-19, he adds. That’s why it’s essential for children and parents alike to continue using masks and social distancing when possible. To protect kids who are too young to receive COVID-19 vaccines, it’s also important for other members of their household to make sure they’re fully vaccinated. Finally, Kirkilas says, parents should make sure they’ve brought their child to the pediatrician for their routine wellness checkups and immunizations.