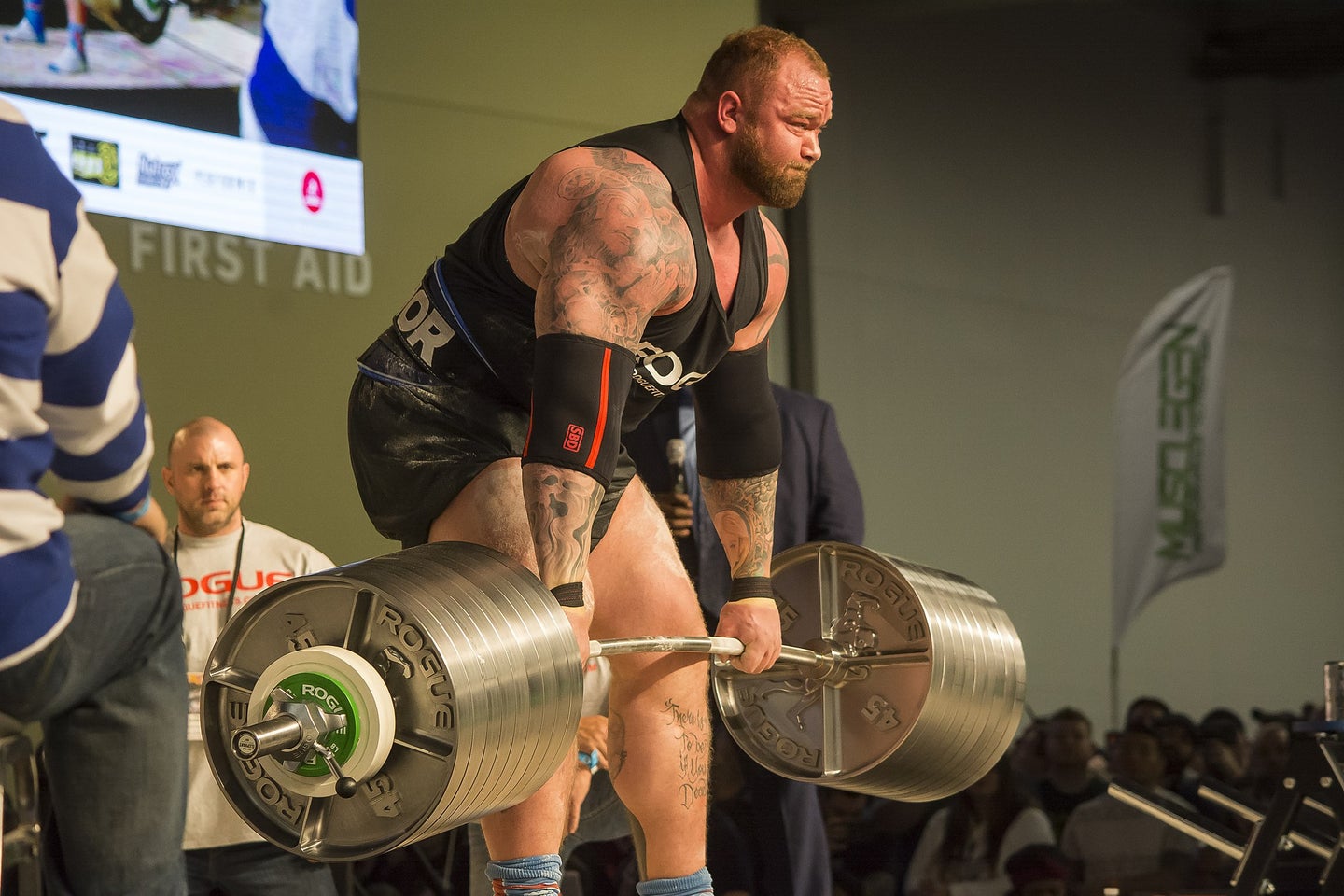 Most of us don’t look at a person carrying two refrigerators on a yoke and think “I could do that.” The same probably goes for lifting a 500-pound stone sphere, or pulling a literal truck, or doing almost any of the feats that the world’s strongest people accomplish on TV.

We here at PopSci certainly found it hard to wrap our heads around attempting those displays of strength, so we asked some experts: What would happen if we—a group of reasonably athletic but far-from-elite office workers—took a stab at the World’s Strongest Man contest? What body parts would we tear or snap out of place first?

The answer isn’t nearly as gruesome as you might think.

First of all, it’s important to understand that those moves look impressive because they’re designed to. “If you look at a barbell and it has 600 versus 800 pounds on it, [most people are] not gonna be able to tell the difference,” says Kalle Beck, a strongman and a coach who runs the site Starting Strongman. But pretty much anyone will be amazed if they watch you lift a car. Strongman competitions began as traveling events not unlike freak shows, so the whole sport is founded on lifting and moving odd objects and doing things that will inspire shock and awe. Add to that the need to make an event like World’s Strongest Man or the Arnold Classic as TV-friendly as possible, and you end up with a lot of wild-looking tasks. Pulling a semi truck in front of a crowd isn’t that different from pulling a weighted sled across the floor of your gym, but the truck sure looks cooler.

Those visually interesting elements make strongman more risky in some ways, given that you have to contort your body into less natural positions to grab, say, the edge of a car you’re lifting versus a straight barbell. Most of the classic lifting moves you’ve seen—the squat, the deadlift, and the bench press—are part of a sport called powerlifting, which only ever involves holding onto a standard issue barbell. Strongman includes some elements of powerlifting, but it’s different in a crucial way. “Powerlifting is pretty strict, whereas strongman is pretty much anything and everything,” says Sam Spinelli, a physical therapist and strongman. “It’s pretty much lifting odd objects, so it goes into more unique ranges of motion and has more ways the weight is loaded.”

Powerlifters only ever reach about 40 degrees of lumbar flexion, which is the technical term for when your spine bends forward, and most of the time they stay within 26 and 40 degrees. But in strongman, Spinelli explains, the better you are at it, the more you tend to bend your spine.

The most extreme example is the Atlas stone event:

The competitor has to bend way forward with their hands nearly on the ground, lift the stone, and then wrap their whole upper body around it to roll the weight upwards. That’s not a motion that comes into play in everyday life, so it would be easy to tweak a muscle in the process. It’s actually so risky that Spinelli says lots of strongman athletes who don’t compete opt to elevate the stone on a little platform to make the motion less hazardous.

“When we look at the literature, we can see that a risk factor for spinal injury is lifting through a wider range of motion,” Spinelli explains. “A secondary risk factor is the magnitude of load lifted, so if you’re in a competitive setting where you’re trying to lift more and more weight, it does increase the risk that you’ll get an injury if you’re not prepared for it.” He says the most common injury he sees is simply muscle strain—you lifted something too heavy or moved awkwardly, and you damaged the fibers. Strongman injuries generally occur in the same joint areas as powerlifting ones: the back, shoulders, and hips, plus the occasional knee problem.

Besides the Atlas stone, Spinelli says overhead presses tend to be a challenge because they require your shoulders to rotate and flex in a way that many people can’t handle, whether because of low flexibility or simply lack of experience.

Beck also says movements like the axle clean are risky, since you use what lifters call a mixed grip. Rather than holding the bar with both palms down, you rotate one to face up, giving you a firmer grasp—but also increasing your risk of tearing a bicep. That’s exactly what Beck did himself. “I did thousands of mixed grip cleans before it tore,” he says. Similarly, tire flips are notorious for ripping through bicep muscles.

But besides these moves, few of the common strongman feats are inherently risky. You can still get into trouble, but only in the same way you can with any physical activity—by pushing past your body’s limits.

Take the yoke carry, for instance, the one where someone puts a bar across their back and attaches two refrigerators to either end. As Beck explains, the fact that you only have to lift the weight of the appliances a couple inches off the ground to complete the event actually makes it more dangerous for a newcomer. It’s easy to overload the yoke with more than you can really handle, and when you do, all that weight is directly over your spine.

The same principle applies to pretty much all of strongman. “People need to check their ego,” agrees Spinelli. “It’s one of the biggest reasons is we preach this progressive, take-what-you-can-handle approach.”

The happy truth is that strongman is imminently scalable to your abilities. “Pretty much anyone can drag a sled today,” Spinelli says, even if they can’t load much weight onto it. “Maybe you can’t pick up a 500-pound Atlas stone, but you could pick up a 20-pound one.”

Beck and Spinelli both say by far the biggest misconception about strongman is that you have to be a strong man to do it—that it’s only for giant, muscular, macho people. Strongman events have weight classes (the women’s start at 120 pounds!), and because it’s a small sport, everyone tends to be welcoming to anyone who’s interested in joining. “I’ve been at events where they couldn’t use the log [used for the overhead log press],” Spinelli says. “The lightest one is 65 pounds, and there was an older lady who couldn’t press it overhead, they brought out a ladies barbell that she could press instead. She was 67 years old.”

Beck says the tagline of his website—“strongman is for everyone”—isn’t just talk. Strongman is essentially just manual labor made into a sport, and he thinks it’s worth getting into at any fitness level. “I think anyone can do it and feel the same empowerment,” Beck says. “Pulling a semi truck is a really cool feeling—even if it’s just for fun.” But you should probably start with something a little smaller.