Tom Brady is headed to the Super Bowl at 43 years old. How?

Training, motivation, and luck are key to a long athletic career. 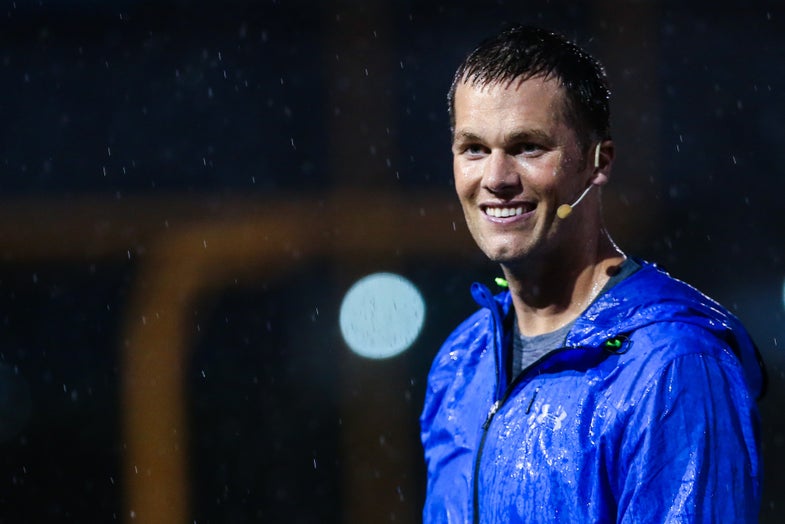 Tom Brady's agelessness on the football field has baffled many. But he's not the only 40-something-year-old athlete winning out there. Summer/Deposit Photos
SHARE

Professional athletes must keep themselves in peak physical condition to perform their jobs. But like the rest of us, as they age these top performers’ stamina tends to decline, and most retire before the age of 40. However, an elite few, including six-time Super Bowl champion Tom Brady, are pushing the limits—and expectations—of what aging bodies can do. They’re leading some people to ask, could 40 be the new 20?

Essam El-Hadary would have you believe so. In 2018 the 48-year-old Egyptian goalie became the oldest player to ever take the field in a World Cup match. Brady would agree. The NFL quarterback played in back-to-back Super Bowls in 2017 and 2018, throwing for a record 4,577 yards last season at the age of 40. Now he’s back in the championship at 43. And Texas Rangers’ pitcher Bartolo Colon, at age 47, has no intention of slowing down. The veteran starting pitcher made the sport’s coveted All-Star team as recently as 2016, and he is now playing in the Mexican League. Meanwhile, WNBA legend Sue Bird won her fourth championship last year, just a few days shy of her 40th birthday.

What’s special about these athletes that keeps them performing at the highest level years after their teammates have been sidelined? And will they ever hang up their jerseys? The biggest factors appear to be luck and mindset, says Peter Keir, a professor in the Department of Kinesiology at McMaster University. Between the ages of 30 and 40, players typically start to experience greater injury susceptibility and slower recovery times, so avoiding a serious injury late in one’s career is essential to athletic longevity. As a result, the oldest players on a team tend to be the ones in low contact positions, such as quarterback, field goal kicker, goalie, or pitcher. These roles rely more on experience, skill, and wisdom—knowing precisely where to throw or kick the ball, or where to place your body to stop it—making old age an asset.

Even more important than avoiding an injury may be avoiding burn out. After competing for 30 years or more, many athletes’ motivation likely starts to wane. The key to keep playing may be as simple as a desire to do so. “A lot of it is, for a lack of a better term, old fashioned stubbornness. [These athletes] are going to stay on top as long as they can,” says Keir. “I think that plays a huge role in the desire to stay there and work as hard.”

Of course, training matters too. Incorporating so-called ballistic movements—exercises an athlete performs using all their force as quickly as they can—into a workout through high intensity interval training can help preserve big muscle fibers, as can lifting weights to fatigue. Less rigorously studied, Brady swears by his infamous TB12 method that touts “muscle pliability.” (Researchers say this is not a real thing.) El-Hadary attributes ice baths to his success, which may help reduce pain, inflammation, and fatigue by reducing blood flow to the muscle. Stretching is also essential to protecting joints and preventing injury. As we get older, our muscles get tighter, and that tightness might cause us to alter the mechanics of our movement, which could lead to injury.

So what are the athletic age limits? Will we ever see a 50-year-old competing with a 20-year-old? Probably not. Eventually, no matter how determined you are, your muscles start to break down, causing you to lose strength, speed, and agility.

“I think big changes happen after you’re 40,” Keir says. “We have people playing at elite levels in their late 30s in pretty much every sport, but it’s rare after 40. We end up losing muscle mass, we end up moving a little slower because we’re losing some of these fast twitch muscle fibers. And those fast twitch muscle fibers are the ones that add the big forces, so if you start losing those then you’re not as powerful.”

Muscle strength deteriorates with age through a process called sarcopenia. The muscle fibers, particularly fast-twitch fibers that are important for sprinting, start to decline in both number and size. What’s more, motor neurons coming from the spinal cord that plug into those muscle fibers begin to die off. When we’re young, other motor neurons will pick up the slack and grow a new branch to reinnervate the muscle fiber, but this recovery is hampered with age. There are conflicting reports about when this process starts, though, with some studies saying we show signs as early as our 30s, while others claim these changes don’t happen until we enter our 50s.

This age difference may have to do with lifestyle. “The old adage, ‘if you don’t use it you lose it’—that’s absolutely the way it works with aging,” says Russell Hepple, professor of Physical Therapy and Muscle Biology at the University of Florida. “A body that is in motion tends to stay in motion.”

The best way to prevent muscle atrophy is to keep exercising. Case in point, octogenarian runners. While they’re no longer in it to win it, senior citizens like 88-year-old Katherine Beiers are regularly completing marathons. Motivation, training, and avoiding injury are just as important in this group of elite athletes, although genetics may play a role, too. Aged athletes appear to have better preservation of muscle mass than their sedentary peers, particularly in the connections between motor neurons and muscle fibers. Hepple says that one possibility is that they “have some kind of intrinsically slower rate of aging.”

You don’t have to run marathons to experience the benefits of exercise, though. Hepple says that regardless of age, most of us could—and should—be doing more than we are. “Physical activity is, I mean, it’s a landslide. It’s by far the most effective thing that you can do to preserve your health as you age.”