There's such a thing as pushing yourself too hard. 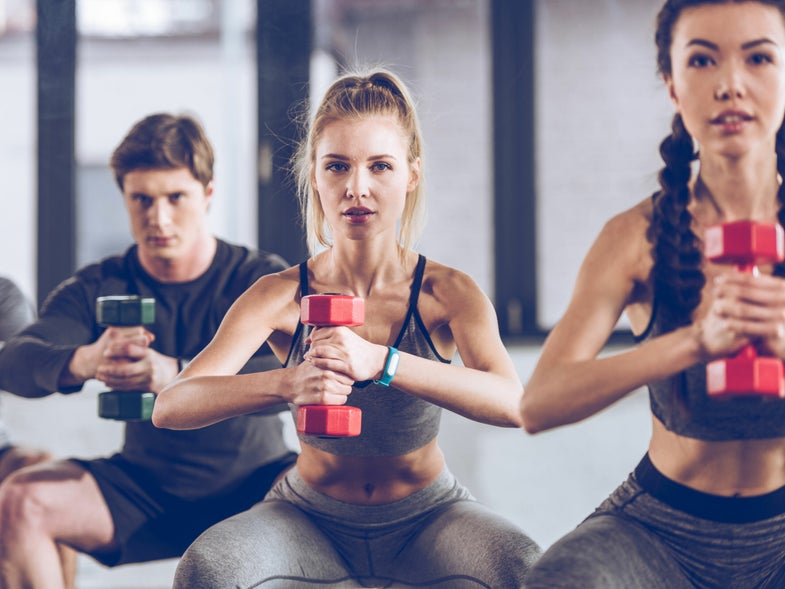 Overexerting your muscles to an extreme degree can cause a life-threatening condition known as rhabdomyolysis. Deposit Photos
SHARE

Everyone knows that dreaded feeling the morning after you subject your muscles to an intense workout. Your limbs are so fatigued that getting out of bed is a trying task. A condition called delayed onset muscle soreness—DOMS for short—is most often to blame for those intense muscle aches. This mostly benign (yet frustratingly painful) ailment plagues you because during exercise, your muscles create microscopic tears, and the resulting healing process and inflammation causes soreness and pain.

DOMS rarely requires the attention of a doctor, and most often resolves on its own with rest (and non-steroidal anti-inflammatory drugs, like ibuprofen, if necessary). But what happens when that DOMS doesn’t seem to go away?

If your muscle pain gets worse instead of better, and your muscles start to swell and become stiff, it could be a sign of a far more serious condition known as rhabdomyolysis, or rhabdo for short. This condition is the result of the degradation of muscle tissues, which creates waste in the bloodstream that can overwhelm the kidneys.

While rare—and treatable—rhabdo is nothing to scoff about. It almost always requires intensive therapy under hospital supervision. And while still considered scarce, some researchers believe the condition may be on the rise.

What exactly is rhabdo?

When you work out, whether it’s during a run, a calisthenics circuit-training class, or a high intensity interval training (HIIT) weightlifting session, you are taxing your muscles. That strain typically causes some minor injuries as the muscle fibers themselves break down. That’s usually a good thing; when your muscles heal, they replace the damaged tissue with more than was there before—making muscles bigger and stronger. Your muscles should be used to some degree of demand, and incremental strain should make them stronger.

But you can have too much of a good thing. The harder you work your muscles, the more those fibers will break down. During that process, a protein called myoglobin, as well as various electrolytes and enzymes (particularly creatine kinase), are released into the bloodstream and filtered through the liver and kidneys. In extremely high amounts, they can be too much for those filtering and processing organs to handle, and they start to build up. Without treatment, this all eventually results in kidney damage, which, when prolonged, is a life-threatening condition. But once identified, doctors can treat rhabdo with intravenous fluids as well as other medications to help flush the toxins out.

How common is it?

This is a matter of some debate. Some reports claim rhabdo is not common, but not exactly rare, while others, including many case studies, claim that the condition is quite rare—at least in the gym. While overworked muscles as the result of intensive exercise can cause the ailment, certain drugs, toxins, and even inherited conditions (the most common being McArdle disease, in which the body can’t break down glycogen), can all cause rhabdo as well.

Is it on the rise?

Doctors and researchers have been documenting cases of rhabdo in Earthquake victims (in which people have sustained injuries to their muscles) as well as in the military and other jobs that require high levels of muscle activity.

But more recently, and as The New York Times pointed out in 2017, case reports and other studies have noted an increase in the number of cases of exercise-induced rhabdomyolysis presenting to emergency rooms throughout the country. High intensity workouts from exercise classes like spinning and crossfit, as well as marathon-training and other grueling regimens, are supposedly to blame for an increasing portion of rhabdo cases.

In one 2016 study in the Clinical Journal of Sports Medicine, emergency room doctors at the Weill Cornell Medical Center in New York reported 29 cases of rhabdo during a four year period. All of them were from some type of exercise class, and the most common culprits were spin classes.

These brief, intense workouts are known to motivate people to push themselves past their limits. In theory, yes, it’s sometimes a good idea to push yourself to increase your endurance and cardiovascular capacity. But in reality, that increase should be done incrementally. The researchers note that many of the people taking these exercise classes were not elite athletes and pushing themselves too hard, which is one of the easiest ways to wind up with rhabdo; if your muscles aren’t used to the load placed on them, more of those fibers will break down, paving the way for kidney crises.

How do I know if I have it?

Unlike DOMS, rhabdo causes such extreme pain that the muscles become stiff and rigid, such that its hard to move; people who’ve had rhabdo describe the pain as excruciating. In other words, you’re not likely to mistake it for the discomfort of a typical workout. Further, the overload of myoglobin in the bloodstream and filtered into the kidneys causes the urine to become very dark brown, a characteristic change from even the most dehydrated individual’s pee. Nevertheless, because rhabdo isn’t necessarily a condition people have heard of, some may think that those excruciating aches are perhaps just badly pulled or tight muscles—so they may wait longer to see a doctor.

In an emergency room or doctor’s office, a physician can test a person’s blood for an enzyme called creatine kinase, which is a marker of muscle damage. Technically, according to 2004 clinical review published by the International Trauma Anesthesia and Critical Care Society, you can come down with a mild case of rhabdo, where doctors will only see a slight increase in creatine kinase. But most people won’t experience that signature debilitating pain until creatine kinase levels reach around five times higher than normal for their age, which is when the condition is considered life-threatening. So if you’re exhibiting symptoms, it’s time to go get help.

What do I do if I think I have rhabdo?

You should go see a doctor immediately, which means heading straight to the emergency room or an urgent care center if you can’t get an appointment right away. Because rhabdo can easily turn life-threatening, you’re better off showing up at the ER and getting a clean bill of health than you are ignoring the condition as it worsens.

How do I make sure I don’t get it?

Any intense exercise can cause rhabdo, but recent case studies suggest it’s more likely to strike when someone dives right into a form of exercise they’re unaccustomed to.

High intensity interval training, or HIIT, is incredibly effective in providing long term health benefits. The method favors short bursts of strenuous activity over long periods of moderate exercise. But you still need to prepare your body for that intensity. That’s sometimes a problem when you are in an exercise class where the whole point is to push you to the edge, but it’s vital to listen to your own body and know what shape you are in—and what you can handle.

If you need to slow down a little to get through your first spin class, you can always work a little harder when you show up for your second, third, and fourth. But you’ve only got two kidneys.