Eliud Kipchoge just ran a marathon in less than two hours—how much faster does science say humans can get?

The Kenyan marathoner says he expects many runners to follow his lead. 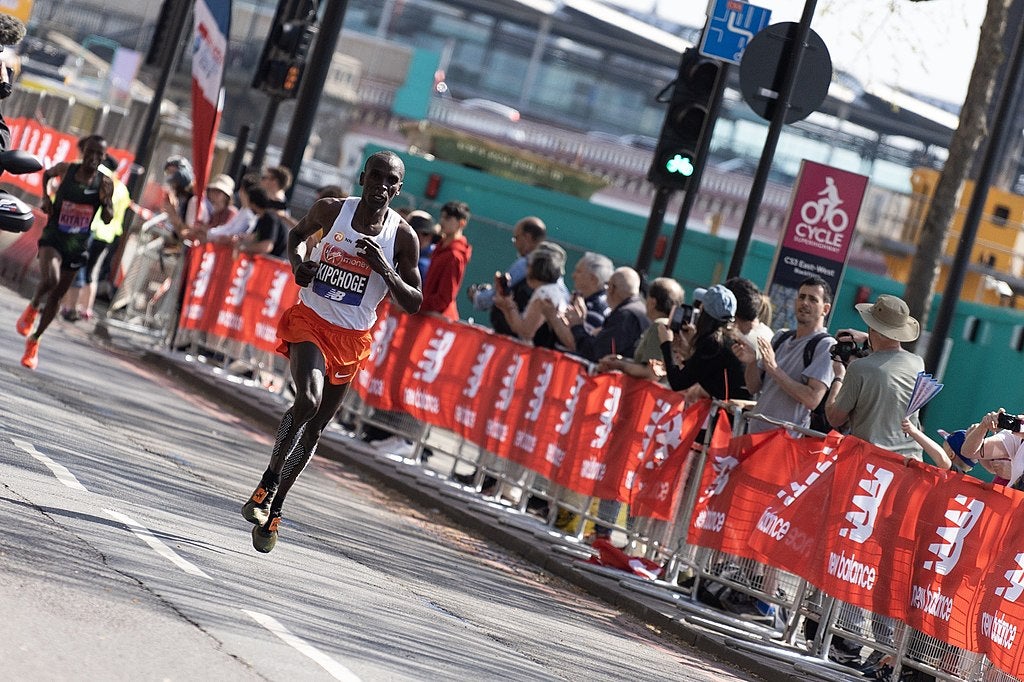 On Saturday morning, Eliud Kipchoge accomplished a feat that athletes and scientists alike had long speculated might be impossible: He ran a marathon in under two hours. The 34-year-old Kenyan athlete’s time—one hour, 59 minutes, and 40 seconds, which equates to a pace of 4:34 minutes-per-mile—marks a major breakthrough not just in the sport of distance running, but in our understanding of what the human body can handle. But this historic pace will not go down in the official world record books, and it’s important to understand why.

Kipchoge ran the event in under two hours, but it was a group effort

Kipchoge’s performance benefited from more than just Saturday’s near-perfect running weather: Orchestrated and funded by U.K.-based chemical company INEOS, the event took place not on an official race course, but on a carefully selected, 6-mile loop of flat, track-like terrain in Vienna, Austria. Additionally, Kipchoge was the only runner racing the clock on the course, and strategically-placed pacers surrounded him in a V-like formation to block any wind or drag from adding seconds to his time. The pacers, themselves among the best distance runners in the world, switched out in a timed, coordinated fashion throughout the race to ensure they could keep matching Kipchoge’s record-breaking speed, which isn’t allowed on an official marathon course. Meanwhile, a car at the front of the pack projected a green laser moving at the pace needed to pass the two-hour mark to help keep the athlete steady.

Because a marathon is so long—26.2 miles—little things can have huge cumulative impacts on a runner’s time. Take the Boston Marathon, which is held in early April and thus plagued by New England’s wildly unpredictable spring weather: Two years ago, an unknown amateur runner named Sarah Sellers took second place in the women’s race as cold temperatures and freezing rain caused elite runners to tack on extra seconds. But even on a perfect day, small factors can add up. Not drinking enough water can dehydrate a runner and increase their body temperature, while not taking in enough quick carbohydrates can reduce overall muscle performance. Over a marathon distance, those extra seconds can easily add up to a world of difference for someone trying to break a record.

Kipchoge undoubtedly accomplished an amazing athletic feat in Vienna, but this event was a far-cry from a blustery day in Boston full of slick streets and hills. So why do we care? The short answer is that until now, we had no idea whether anyone could possibly run so fast for so long—no matter how ideal their racing conditions. Even Kipchoge himself has failed to do so before. In 2017, he made another unsanctioned attempt at breaking the two-hour mark in an assisted race. He missed the mark by less than a minute. Now that we know it’s possible, the race will be on to make it happen under more typical conditions.

Why is it such a big deal?

For Kipchoge (and the many exercise scientists, athletes, and coaches who helped support the highly-publicized event) the achievement was less about breaking into record books than it was about breaking down mental barriers. He said that he hopes the race will inspire others to smash the time barrier as well.

The marathon—a 26.2-mile run—was one of the original events held at the first modern Olympic games in 1896. The winner, Greek runner Spyridon Louis, crossed the finish line in two hours, 58 minutes, and 50 seconds. Since then, men and women have handily outpaced that performance, and marathon times have dropped drastically over the course of the last century. Kipchoge holds the official world record for men with his 2:01:39 run at the 2018 Berlin marathon, and the U.K.’s Paula Radcliffe maintains the fastest time for women, having run a 2:15:25 at the 2003 London marathon.

Shattering the notion that humans can’t run 26.2 miles in less than two hours could actually be the key to making us all run a bit faster. Before Roger Bannister ran a 3:59.4 in 1954 on a track at Oxford University in England, doctors thought that running a mile in less than four minutes was not only impossible, but likely fatal: A human being could not move their body at that fast a pace for so long, they thought, without breaking down. Bannister, a doctor himself, came through unscathed. Less than two months later, a competitor named John Landy ran a mile in 3:58. Just a decade later Jim Ryun became the first high schooler to break four. More than 1,400 athletes have managed a sub-four minute mile, the fastest of which was a 3:43.13 by Morrocan runner, Hicham El Guerrouj, in 1999. But running at an all-out sprint for a few minutes is one thing, and maintaining a racer’s pace for the entire length of a marathon is another.

The science it took to get there

It’s unclear whether the two hour marathon will follow the same trend as Bannister’s sub-four mile. The marathon is a much longer distance, which means there are far more opportunities for the body to break down and for unavoidable complications to accumulate. Even a marathoner who is physiologically capable of maintaining a blistering 4:34 pace for 26.2 miles might not achieve it, given less picture-perfect conditions than the ones Kipchoge benefited from in Vienna.

But recent research hinted that this day would eventually come. In a 1991 paper, the Mayo Clinic’s Michael Joyner postulated that under absolutely ideal conditions, a world-class marathoner could run a time of 1:57:58. He arrived at that precise number by combining physiological data from elite runners, including their VO2max (how much oxygen their muscles can take in and use at once—the higher the better), lactate threshold (the point at which lactate, which builds up as our muscles use glucose for fuel, starts to interfere with their function), and running economy (how much energy a runner needs to go from point A to point B). Joyner’s data crunching led him to conclude that elite human runners were technically capable of making times “significantly faster” than 1991’s world record of 2:06:50.

Runners themselves aren’t the only ones who took that message to heart. Nike, in particular, has poured resources into research on how the human body degrades during a marathon and how technology, including the company’s controversial racing shoes, can help runners pick up speed. Nike, which provided Kipchoge’s shoes on Saturday (as well as for his failed attempt at breaking the two-hour barrier in 2017, which was sponsored by Nike and National Geographic), uses energy-returning foam combined with carbon fiber plates to propel the wearer forward more efficiently. The latest iteration of this superfoam/carbon fiber combo is called NEXT%, but Kipchoge’s shoes on Saturday looked like something even newer. As Runner’s World and the site Believe in the Run first pointed out, the footwear resembles diagrams in a U.S. patent filed in 2018 and credited to Nike. That shoe features two stacked layers of cushioning, three plates (possibly made of carbon fiber), and four fluid-filled chambers. With Nike not yet commenting on the exact specifications of Kipcoge’s barrier-breaking kicks, it’s impossible to know just how much they may have influenced his time.

But even if high-tech shoes helped shave off a second here or there, Kipchoge’s stated desire to see other runners beat supposedly-unbeatable times could still pan out. After all, Bannister’s four-minute mile breakthrough involved ideal track conditions, light-weight shoes, and a pack of pacers to help him—and now high school athletes manage to beat his time at sanctioned events.

How much faster can humans go?

In the grand scheme of competitive sporting events, the marathon is still a relatively uncharted distance. In the past two decades it has seen an increase in popularity, and more money than ever is going into exercise physiology aimed at better understanding the human body, as well as sneaker technology specifically designed for faster and more efficient distance running. It seems plausible that, given the right conditions—and a flat-as-a-pancake marathon course (like Berlin’s or Chicago’s)—an elite marathoner could run a sub two hour marathon at a sanctioned event, which could go into the official record books.

It might be slow going. While anyone can enlist pacers to help block wind and keep them running at the right speed, the only way to do so at a sanctioned event is to have the whole crew register for the race. Competitors can’t pop in and out of an official course the way Kipchoge’s support team did on Saturday, so someone trying to break a record will inevitably outpace their pacers as the non-record-breakers get fatigued. The laser-directed pacing bar that guided Kipchoge and his rotating cast of fellow runners along wouldn’t be allowed at a sanctioned event, and it would be impossible to guarantee ideal conditions. No one is going to reschedule the Chicago marathon because the forecast is a little iffy. For that reason alone, there’s a huge element of luck involved in recreating Saturday’s feat in a sanctioned event.

There are many marathons to run in and lots of people eager to run in them, so the right conditions could fall into place for the right athlete someday. What can we do to get their faster? Many involved in Kipchoge’s training comment on his remarkable self-control, especially when it comes to tolerating pain. Perhaps there are some insights we can glean from his physiology and training to give similarly swift-footed athletes a shot at breaking through the same barrier. But as was the case with Bannister’s four-minute feat, it’s possible that Kipchoge’s mastery over the marathon will be enough to kickstart a new era of endurance running. Now that they know it can be done, runners around the world could feel spurred to do it for themselves.

After the race, Kipchoge told reporters that he expected great things to come from his accomplishment. “I want to tell people that no human is limited,” he said. “You can do it, and I am expecting more athletes all over the world to run under two hours after today.”