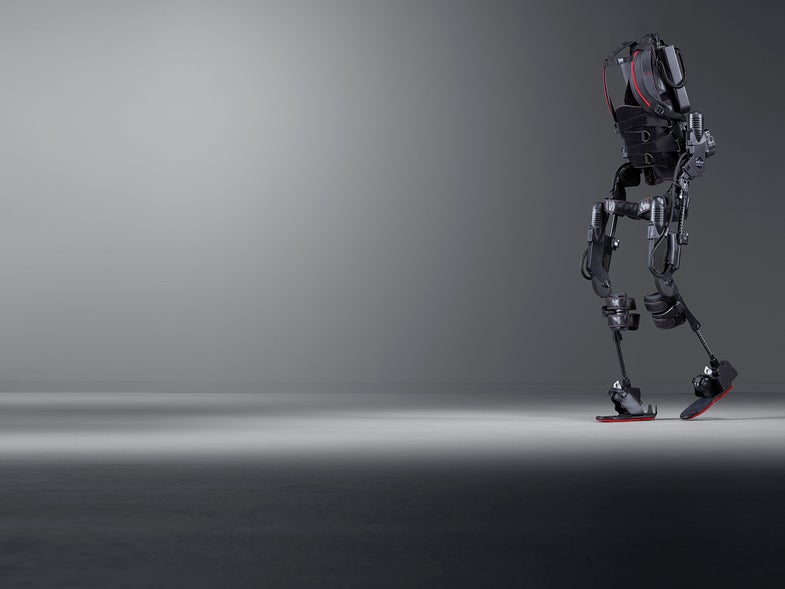 When you think of bionic exoskeleton suits, images of futuristic high-tech super soldiers often come to mind. Think Tom Cruise in this summer’s sci-fi flick Edge Of Tomorrow, or Ripley taking on the queen xenomorph in Aliens. While militaries across the world are certainly interested in designing weaponized exo-suits for their armies of the future, powered exoskeletons are actually finding a much more benevolent niche right now: patient rehabilitation.

That’s the idea behind the full-body Ekso suits manufactured by Ekso Bionics. Originally developed for DARPA to help soldiers carry heavy loads, Ekso Bionic’s suits were eventually repurposed to help victims of stroke, traumatic brain injury, and spinal cord injury get back up on their feet. Now, rehabilitation clinics across the country have started using the company’s electronic exoskeletons to help patients with lower extremity weakness relearn how to walk.

With the help of a physical therapist, patients strap their legs into the bionic suit, as well as fasten a rigid brace around their waist. With two crutches on their arms, the patients stand up from a sitting position – and then start walking as soon as they are ready. Weight sensors in the suit perceive when the user shifts his or her weight forward, triggering the device to make a step.

According to Nathan Harding, CEO and co-founder of Ekso Bionics, the exoskeleton is designed to get patients moving around as soon as possible after an injury, which can make a huge difference in speeding up recovery time. “What’s really exciting about our device, is [patients] can get up and they get usually two or three hundred steps in the very first session,” Harding tells Popular Science. “And so that really starts to make an impact early on.”

The bionic suit also boasts something called variable assist, which allows patients to incrementally put as much of their own strength into the machine as possible. This is also extra beneficial for gait training, as it allows patients to become more and more engaged as they begin to heal.

For now, Ekso Bionics is focused on making their suits available to clinic and rehab markets, so it isn’t a product than can be purchased by individuals at the moment. Plus, the exoskeleton has a ways to go before it can be used as a personal mobility device, as it still requires the aid of a personal trainer to be operational. But Harding said independence is something they are working on.

“Walking was something that you immediately realize that you missed.”

“A lot of it comes down to falls and safety. And we look at three areas when it comes to falls: We look at fall avoidance, fall mitigation, and then fall recovery. The most important, of course, is fall avoidance, and we work on that a lot now, which can be emergency maneuvers or balance techniques, things like that.”

Until then, patients are seeing enormous benefit from the suits. And for paraplegic patients like Jason Geisner (check out his story in the video above), working with the Ekso team has reminded him what it feels like to stand, and walk, on his own two feet.

“All those things that I took for granted prior to my injury became so relevant when I was walking again,” says Geisner. “It was something that you immediately realize that you missed when you have it again… When you break out of the new normal back into what was, it just reminds you there’s more.”