This harpoon-throwing robot is designed to hunt destructive lionfish

The bot can dive deeper than people to catch the surprisingly tasty invasive species. 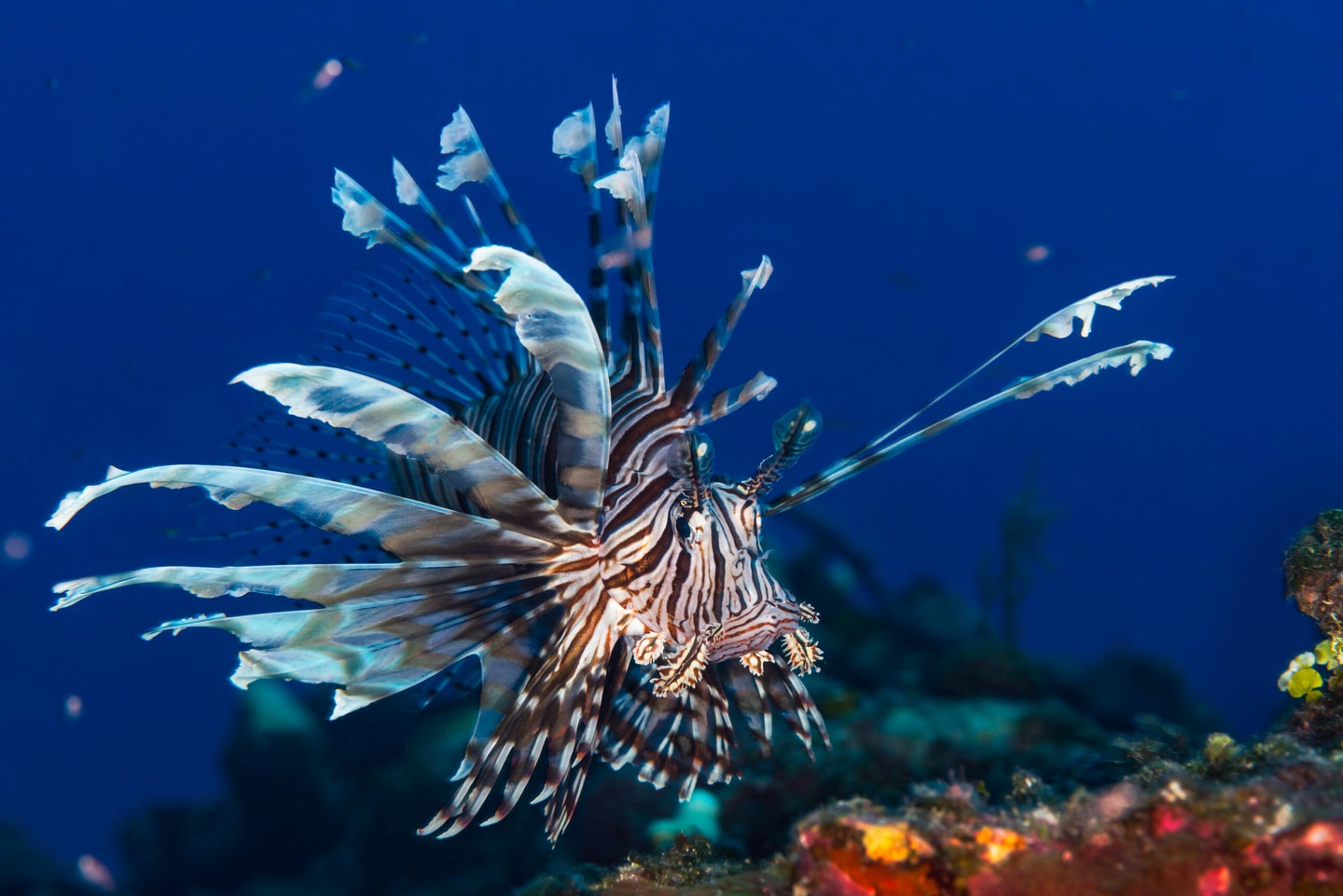 This invasive species has no natural enemies off the east coast of the U.S., making it a tricky creature to combat. DepositPhotos
SHARE

Florida’s got a problem, and it’s spiny, sneaky, and hard to spook, even with diving lessons and serious scuba gear.

The lionfish first made its way from the South Pacific to the Sunshine State in the 1980s as a popular aquarium pet. It now reigns terror up and down the salty reaches of the eastern United States and Bermuda, with some places hosting hundreds of individuals in a single acre. The species also has a voracious appetite and few known predators (the venomous appendages help), making it nearly impossible to beat back. Except for one grim option.

“You really have to just kill them,” says Casey Benkwitt, a marine biologist at Lancaster University who’s studied the impacts of lionfish on coral habitats.

Wildlife agencies have learned firsthand that the only way to tackle lionfish populations is by spearing them. (The exotic, maroon-striped creatures don’t go to lures and are tough to catch in nets.) The species isn’t too wary of humans, Benkwitt says, so folks can make a sport out of hunting them in close range. In fact, the Florida state government has an annual competition for residents to go out and capture lionfish. Those lucky enough to wrangle the biggest or smallest specimen land a prize of $2,000.

“There’s a great community of people beyond just what we’ve done that has really taken it to heart,” says Amanda Nalley, a spokesperson with the Florida Fish and Wildlife Conservation Commission. But some members of the species can live at depths of up to 1,000 feet, making them more inaccessible.

Florida’s answer to this dilemma? A remotely operated vehicle (ROV) that uses a harpoon gun to exterminate its ruffly target. The “reef sweeper” is designed to snag lionfish lurking well below the water’s surface. On land, a trained employee uses a joystick to home in on the target, almost like in a video game.

“It seems kind of crazy to send a robot out,” Benkwitt says. “But it does solve some of the problems of the fact that there’s a lot of big lionfish that we can’t get to otherwise.”

Right now Florida is testing one reef sweeper prototype with a kill capacity of 150 fish per trip. But Gavin Hunter of Atlantic Lionshare, which collaborated with the state to develop this technology, says that the company is working on rolling out a sleeker, more advanced prototype this summer. While the new model will only hold 70 to 100 carcasses, its spear can reload every 10 seconds, cutting down the time it takes to deploy the machine. Ultimately, Hunter says the goal is to have each ROV bag 1,000 lionfish a day.

The robots will cost close to $300,000 a pop, so they might not be the cheapest solution to a wide and growing problem. Florida is already facing a scourge of unique environmental pests, between the Burmese pythons swallowing up the Everglades and the Kudzu vines draping many swamplands. Lionfish only add to the crisis: They outcompete local species like snapper for crustacean prey. “They are doing really well there at the expense of the native fish populations,” says Benkwitt. One report shows that the presence of a single lionfish can drive down the diversity of a coral reef community by 79 percent.

Florida and other states will keep chipping away at the problem, whether it be with robots or other unconventional ideas, to figure out a feasible eradication method. Hunter notes that there’s a healthy culinary demand for lionfish: Instead of keeping them in tanks, people are starting to put them on their plates. “The value is in the nutrition” he says. Once its spines are removed, the species serves as a flaky grouper-like snack (that you might be able to grab at your local Whole Foods, depending on where you’re reading this from). Currently, it’s priced at up to $6 a pound, which, Hunter adds, could give fishers an incentive to invest in a spear-throwing ROV.

And that’s the real mission of the reef sweeper—to feed the mission of removing invasive species by, well, feeding as many seafood enthusiasts as possible in the lionfish’s newfound territory.