Mexico City buried its river and lakes to prevent disease. But then COVID-19 happened.

The city's air pollution could worsen the toll of the pandemic. 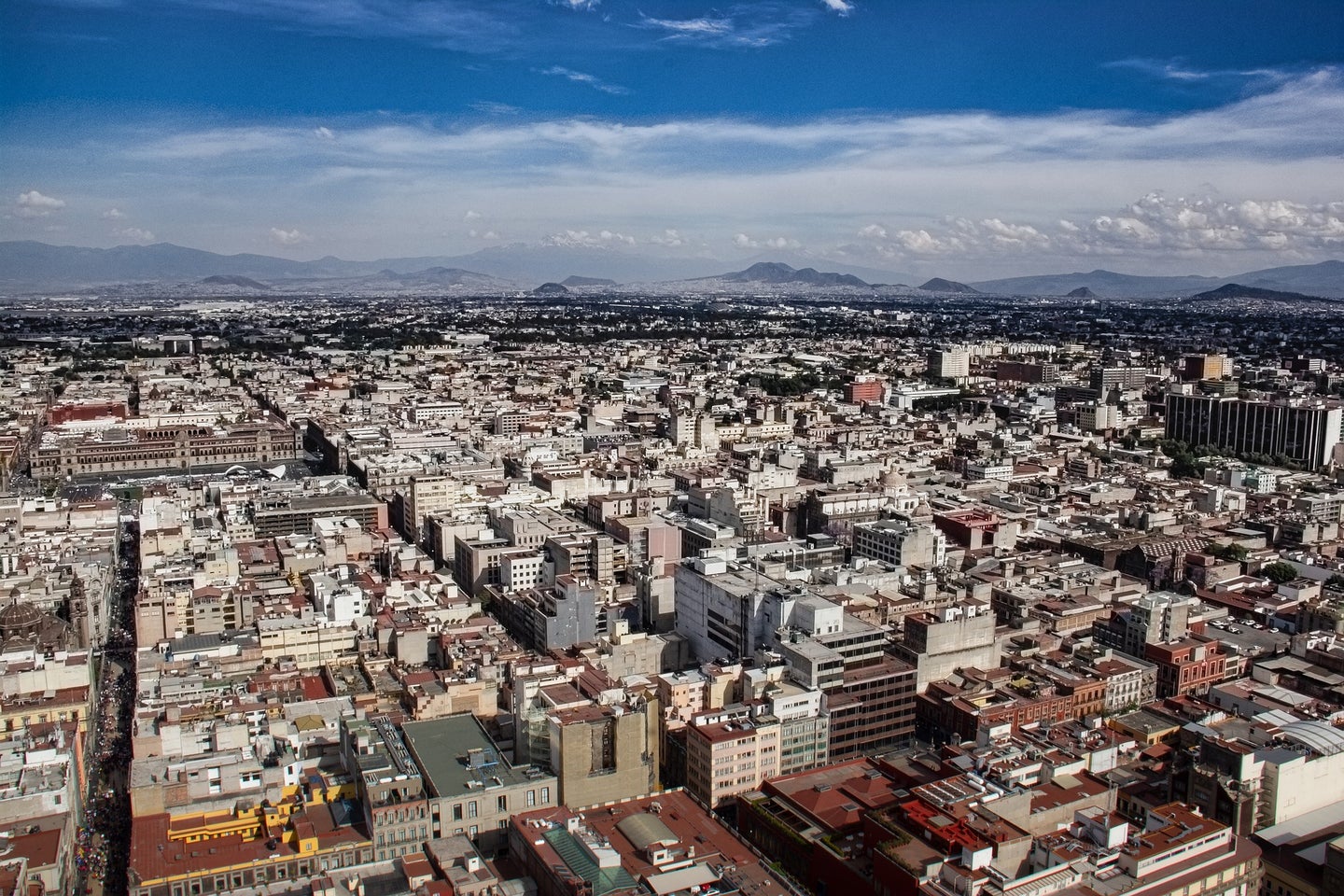 Certain winds and weather can turn Mexico City into a dust bowl, making it hard for residents to breathe. Mario Aranda/Pixabay
SHARE

Elena Delavega is an associate professor of Social Work at the University of Memphis. This story originally featured on The Conversation.

Mexico City is a dust bowl, a polluted megalopolis where breathing is hard and newly washed clothes hung out to dry turn stiff by evening. Even before the COVID-19 pandemic began clobbering this capital city, residents regularly wore face masks during the frequent air quality emergencies there.

Mexico City wasn’t always an ecological and health disaster. As the center of the Aztec empire, it was verdant and diverse. As late as the early 20th century, 45 rivers ran through the Mexican capital.

The decision to bury and pave over its rivers, creating today’s arid metropolis, was a 20th-century plan meant to protect residents from disease—specifically, cholera, malaria and other waterborne illnesses brought on by frequent flooding.

I’m a scholar who studies poverty with a focus on urban areas, and Mexico City is my gray, concrete hometown. The relationship between its geography, history and health outcomes are relevant today, as the city struggles with its latest disease outbreak.

Mexico City was founded by the people now called Aztecs—but who called themselves Tenochcas—in 1325. The Aztecs built their city on a rock in Lake Texcoco, mostly because the more prime locations along the shore were already taken.

By 1427 the powerful Aztecs had defeated their lakeshore neighbors and built a shining capital that spanned the lake. The city, called Tenochtitlan, was built amid water by the development of “chinampas”—small plots of lake filled in with debris, pottery and soil to create solid land, with channels flowing around them.

The foremost chronicler of Spain’s colonization of Mexico, Bernal Díaz del Castillo, described Tenochtitlan as crisscrossed by engineering marvels like causeways and removable bridges, and full of “splendid” palaces. Diaz del Castillo reports that the city market was larger and better regulated than those of Constantinople and Rome. As in the Roman empire, aqueducts supplied the city with fresh water.

Tenochtitlan looked like Venice—gorgeous—and had the same health problems, including contaminated water, mosquitoes and unpleasant smells. But the Aztecs managed the city well and prevented flooding. Their dikes and waterways permitted a great diversity of plants and animals to flourish, and the chinampa agricultural system—in which land was replenished with soil dredged from the lake bottom—was one of the most productive the world has ever known.

That good urban management ended with the Spanish conquest in 1521. Tenochtitlan was destroyed, its palaces and causeways turned to rubble at the bottom of the lake.

The Spaniards did not understand the watery ecology of the area, nor did they understand or respect Aztec engineering. To rebuild their capital, they drained the lake.

This strategy led to both drought and an inadequate water supply for most of the year. Rainy season, however, brought tremendous floods. In 1629, the worst flood in Mexico City’s recorded history is said to have lasted five years and killed more than 30,000 people due to drowning and disease. Churches reportedly held rooftop masses.

Rainy season turned parts of the city turned into cesspools, spawning waterborne diseases like cholera and malaria, as well as meningitis. Gastrointestinal illnesses festered, too, because residents used Mexico City’s rivers for dumping garbage and sewage. Human and animal bodies floated in the stagnant waters, emitting a terrible stench.

Mexico gained independence from Spain in 1810. To deal once and for all with its flooding problems, city leaders decided in the 1890s to channel rain, flood waters and sewage away from the city via a 30-mile desagüe, or drainage channel.

Around this time, the population of the capital began to explode. Mexico City had 350,000 residents in 1900 and 3 million in 1950. By the 1930s, its novel sanitation system was already insufficient. Plus, residents were still using Mexico City’s many rivers for washing clothes, as garbage pits and as sewers.

In 1938, the architect Carlos Contreras proposed enclosing three polluted rivers—the Piedad, the Consulado and the Verónica—and turning them into one giant viaduct to prevent flooding, disease and death. Political conditions did not allow this idea to move forward at the time, but the idea of putting Mexico City’s filthy waterways into enormous pipes and burying them stuck.

Over the following decades, rivers began to be put underground. Between 1947 and 1952 most of Mexico City’s 45 rivers were channeled into giant tubes, buried, and paved over. Today, these rivers are visible only in the names of the streets that run over them: Rio Mixcoac Avenue, Rio Churubusco Avenue, and others.

But without its rivers, Mexico City dried up and grew dusty. And because of its geography—located on a plateau, surrounded by mountains – the dust was unable to escape. Mexico City is in a bowl that traps whatever floats in the air.

Starting in the 1980s, the number of cars grew into the millions, trapping pollution, too. Today, Mexico City is notorious for its smog and for the terrible health consequences pollution brings, including asthma and heart disease.

The coronavirus outbreak wasn’t caused by polluted air. But the city’s bad air quality—together with overcrowding and other poverty-related factors—creates the conditions for COVID-19 to severely sicken and kill more people.

In trying to eliminate waterborne illness, the Mexican capital ended up helping an airborne virus find more hosts. It’s an irony of history the Aztecs would surely mourn.