How to put video calls on your TV

We’ve got solutions for Zoom, Google Meet, FaceTime, and more 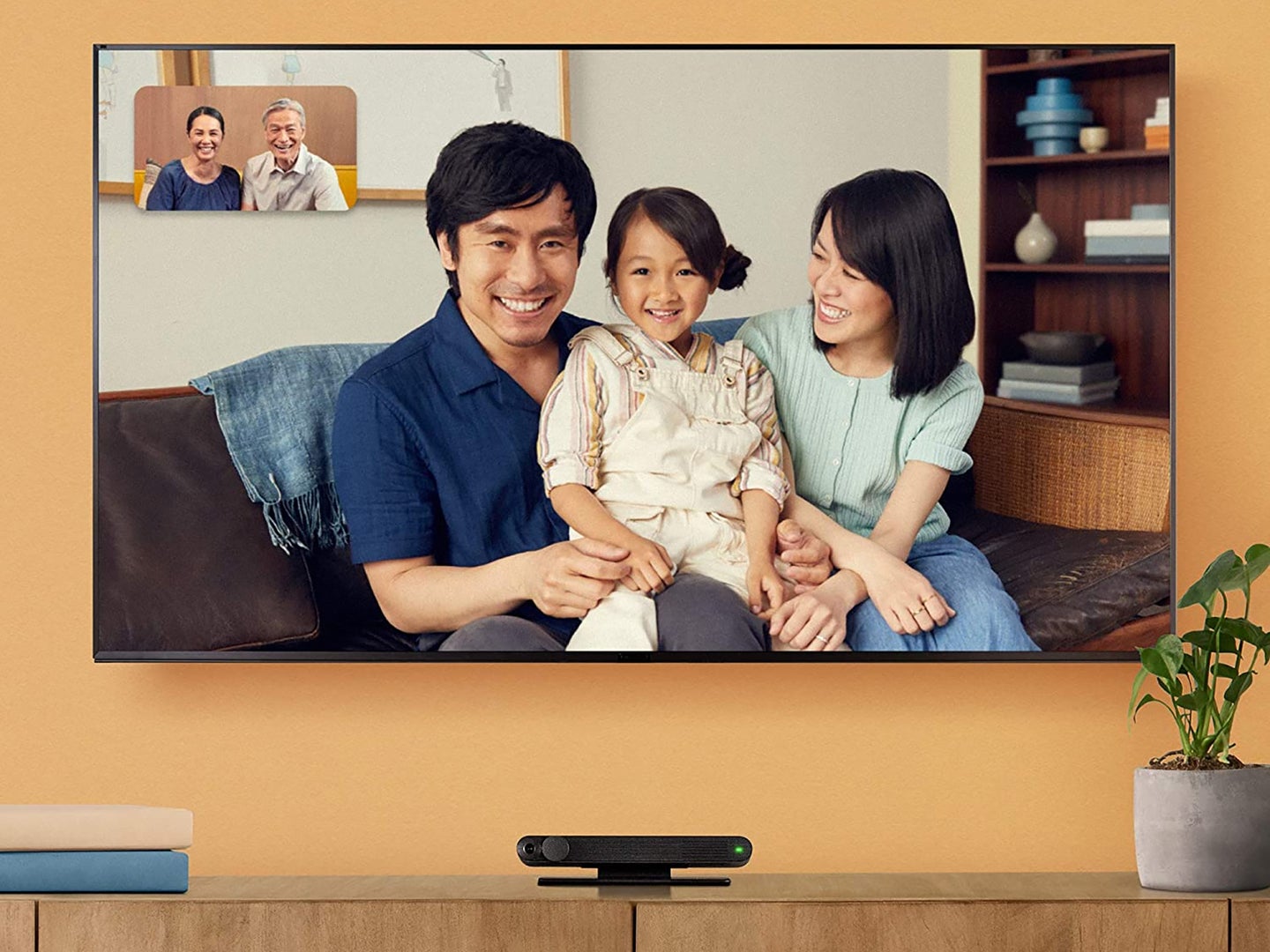 We’re all getting more comfortable working and socializing over video apps, whether it’s office meetings on Zoom or family catch-ups over FaceTime. But squinting at your friends, relatives, or colleagues on your phone, tablet, or computer screen doesn’t always feel like a personal interaction. They’re just so… small.

If you want to feel like they’re actually in the room with you, simply run your video call through your TV. It’s not difficult to set up, and you’ll be able to kick back on the sofa and virtually welcome everyone into your home.

Through a dedicated device

Some devices take care of all your video chatting needs right out of the box: The $120 Amazon Fire TV Cube, for example, recently got video chat capabilities. On top of streaming shows from Netflix and Disney Plus into your living room, it now allows you to make video calls to Alexa-enabled devices with screens, such as the Echo Show, Amazon Fire tablets, and any phone with the Alexa app installed.

You’ll need to buy a webcam to connect to the Fire TV Cube and you’ll need to enable video calling on the device through the Alexa app on your phone: Go to the Devices tab, find the Fire TV Cube, and make sure the Communications option is set to Enabled. Amazon has a more detailed set of instructions you can refer to here.

Alternatively there’s the $149 Facebook Portal, which is essentially an advanced webcam for your TV. All you need to do is plug it into a spare HDMI port on your television set, sign into your Facebook or WhatsApp account, and you’re ready to get chatting with family and friends over a video link.

Your contacts don’t need to have a Portal device set up—they can chat through Facebook Messenger or WhatsApp on their smartphones too. Unlike the Fire TV Cube, the Portal supports group chats, and you can have up to 50 people on a video call in Facebook Messenger. Facebook has more on setting up the device here.

If you’ve got a television that runs Android TV—such as a recent Sony model—you can install Google Duo as one of your apps and video chat that way. You will also need to plug a compatible webcam into your TV set so the others can see you (unless your TV already has a camera of its own), so make sure your webcam will work with your TV, and vice versa, before making a purchase.

Duo support for TVs is relatively new, so you won’t get all the features available on phones and tablets, but you can make one-to-one and group calls. It’ll work with any other device that runs Google Duo, from the Nest Hub Max to a smartphone. Google has provided more information on the setup here.

Unfortunately that’s about it as far as dedicated devices go. Consoles aren’t capable of video calls, and neither are most streaming sticks and boxes. Not only do these devices lack built-in cameras, they don’t support adding external cameras either, making them unsuitable for video chatting.

Through a wired or wireless connection

If you don’t want to take the dedicated device route, your other option is to get the device you usually use for video calls—your phone, tablet, or laptop—and hook it up to your television set. There are a variety of setups and configurations to pick from, depending on the hardware you’re working with.

Perhaps the easiest option is to connect an HDMI cable from your laptop to your TV (you may also need an adapter dongle if your laptop doesn’t support an HDMI connection). Windows or macOS should recognize the link immediately: Head to System and Display in Windows Settings or Displays in macOS System Preferences to configure your TV as a second monitor, mirroring or extending your laptop screen as you prefer.

Of course it’s still your laptop filming you, so you’ll need to keep it in sight in front of the TV. It shouldn’t be too much trouble to get something workable set up (a small table or footstool might help if other surfaces aren’t the proper height). With that done, you can use whatever video calling software you like: Zoom, Skype, FaceTime, Google Meet, or anything else.

Alternatively, go wireless, either from your laptop or phone. With Apple gear, you can use Apple’s own wireless AirPlay standard to beam your small screen over to the big one. At the TV end, you’ll need either an Apple TV box plugged into it, or a television set that supports AirPlay natively.

As long as your AirPlay-enabled TV or Apple TV box is on the same Wi-Fi network as your phone, tablet, or laptop, it should appear when you enable AirPlay. On an iPhone or iPad, tap Screen Mirroring from Control Center (swipe down from the top right corner of the screen to see it); on a MacBook, click the AirPlay button in the menu bar (it looks like an arrow pointing up into a rectangle). Choose your TV or Apple TV, and the big screen will mirror the small one.

As with the laptop-and-HDMI solution, you’ll need to position your mobile device so that its camera is still pointing at you. The best option might be to just prop the device up at the base of your TV, but you may be able to figure out something else that works better.

Chromecasting is another option. If you have a Chromecast dongle attached to your TV, or a TV with Chromecast built in, you can beam your video chat over to it from a variety of devices. This won’t work on iPhones or iPads, but you can mirror your screen from an Android device by swiping down from the top of the display with two fingers, then choosing Screen Cast from the panel that appears.

As long as the Chromecast is on the same Wi-Fi network, it should appear as an option. The end result is similar to AirPlay, with your small device screen mirrored on the TV, so you can then load up any video chat app you like and have the people you’re talking to show up on the big screen. Again, you’ll need to make sure your mobile device is still pointing in your direction.

The same trick works from Google Chrome on a Windows, macOS, or ChromeOS laptop. Click the three dots in the top right corner, then Cast to choose your Chromecast. The Sources box lets you choose whether to mirror a single browser tab or your entire desktop, depending on whether your video chat app runs in the browser or not.

For best results on a Chromecast, try to get all your contacts to switch to Google Meet: It supports Chromecasting natively, so it’ll pipe the video feeds straight to your Chromecast (rather than through your mirrored laptop). You’ll still need to use your computer for the camera and microphone, remember. Google has more instructions on how to make this work here.