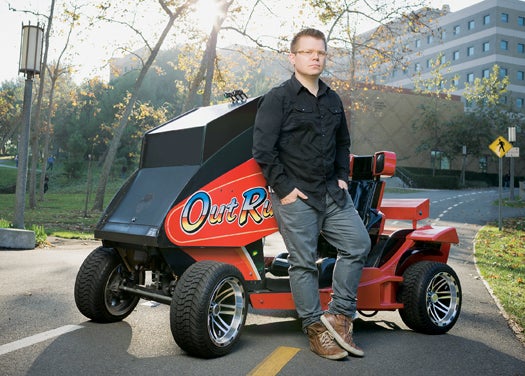 In the late 1980s, millions of arcade-addicted kids sat in the faux racing seats of Sega’s OutRun videogame, grabbed the rubber-covered wheel of the imitation Ferrari Testarossa, pressed down on the pedals, and imagined they were roaring down the street. Twenty-five years later, one of those kids, Garnet Hertz, has realized that fantasy, modding an 1,100-pound arcade machine to ride on pavement.

Hertz, an engineer, designer and artist, came up with the idea when he spotted an OutRun cabinet at an arcade in 2008. A few months later, he found one for sale online and bought it. He also bought an old golf cart on Craigslist, which had a wheelbase that matched the footprint of the game cabinet.

At the time, Hertz was teaching video-game development at the University of California at Irvine, and a few of his students offered to help with his project. The team stripped the 1959 Turf Rider cart down to its drivetrain and mounted the cabinet on top. But the weight was too much for the cart’s three-wheeled chassis, causing the vehicle to tip easily on turns. At that point, the project got sponsored by the Center for Computer Games and Virtual Worlds, a game-research initiative at Irvine, which bought him a 2007 four-wheeled golf cart to replace the Turf Rider. The group then spent the summer of 2010 cutting, welding, and wiring to combine the cabinet with the cart. Hertz had to build a custom steering column to link the game’s wheel with the cart’s steering system.

Click to get a more detailed look at this amazing vehicle.

Yet all that work was simple compared with what came next. Instead of swapping the game’s screen for a windshield, the crew mounted two webcams on the cabinet, wired them to a laptop inside the car, and wrote software that converts the camera’s view of sidewalks and roads into a video of an 8-bit OutRun-style freeway.

The video appears on a flat-screen monitor in front of the driver. Hertz has tested the car on walkways and quiet roads, but operating it is hardly a mellow experience, despite the 13mph top speed. “You’re trusting your fate to a piece of software,” he says. “The thing is terrifying to drive.” 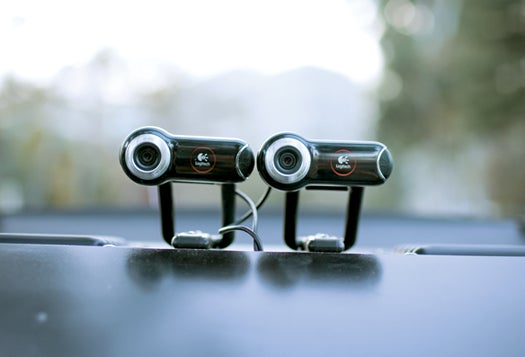 These twin cameras monitor the road ahead of the cart.

In the golf cart, all six batteries sat below the driver. Hertz moved three of them to the back and the other three up front so he could keep the racing seat low to the ground, as it was in the original arcade game. He also wired the game’s original speaker system to the laptop inside the cabinet. Finally, to keep the cart rolling smoothly, he bought a new set of wheels.

The golf cart’s steering column was on the left side of the drivetrain, but the arcade game’s steering wheel was in the center of the console. To fit everything together at the proper angles and prevent the steering system from jamming, Hertz built a custom steering shaft and mount to shift the steering column to the center and inverted several of the components connecting the steering box with the front wheels. The game’s brake and gas pedal were simpler to mate with the cart’s system, and he decided not to mess with the speed controller—13 mph was plenty fast.

The first version of the software detected only roads, not people. Once Hertz started showing off the car at art shows and other gatherings, he started worrying about colliding with bystanders. Recently, he altered the software to superimpose the arcade-style video over a live feed of the real-world view. The game car handles well and turns safely, but just in case it ever rolls, he built custom mounts for each of the batteries to secure them to the frame. 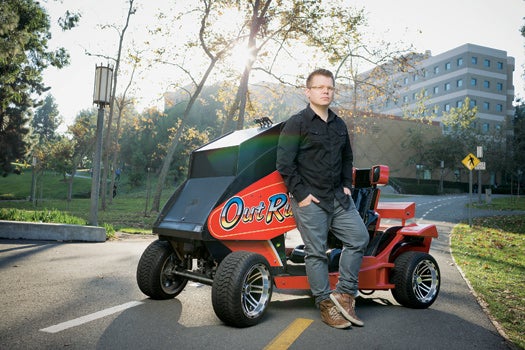 Out of the Garage

The builder of the vehicle, Garnet Hertz, grew up fixing cars. 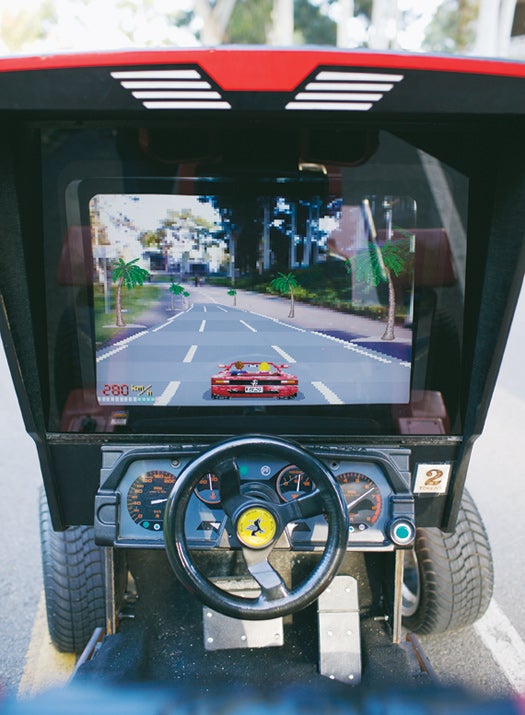 Custom software renders the road ahead in 8-bit augmented-reality graphics. Anything else in front of the cameras appears onscreen as well. 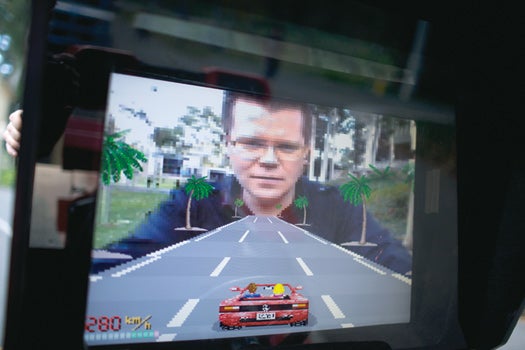 Staring into the cameras puts Hertz right into the game. 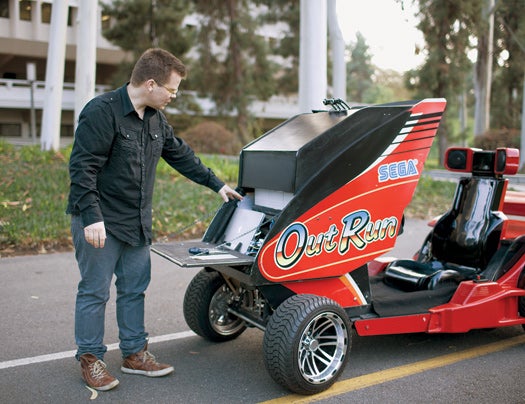 Replacing the original cathode-ray tube with a flat-screen monitor provided extra room for batteries and a laptop. 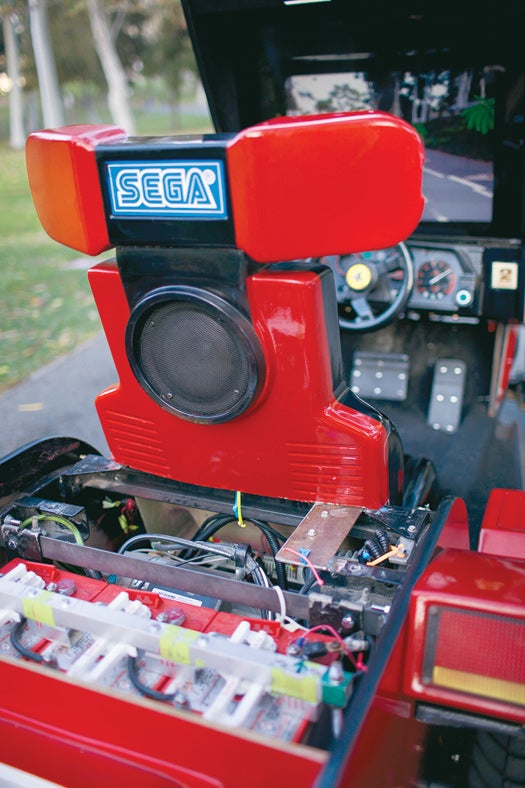 Sensors detect when the vehicle is accelerating or braking and alert the software, which makes the onscreen car follow suit.
Projects
8-bit
February 2012
North America
sega
university of california irvine