How to Build My Newest Air Cannon

And the more generally useful Pilot Actuated Valve that makes it possible. 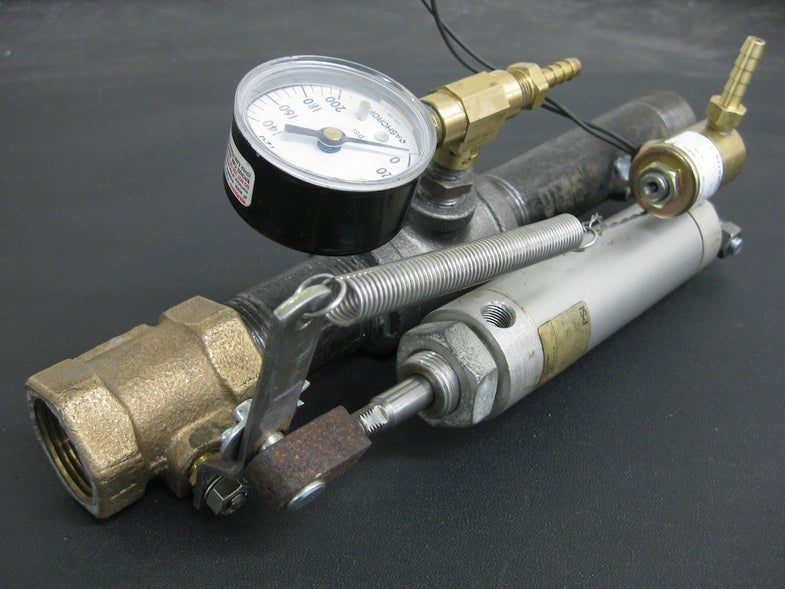 Over the years, the TE crew and I have had some fun with pneumatic cannons. The original pirate cannon was our first attempt and eventually gained neighborhood notoriety by destroying a bar’s plate glass window. The cannon on the Team PzKpfw tank was so powerful it vaporized its hot dog munitions, but we left the cannon in the tank when we turned it into a piece of commando public art. Since then, I’ve been itching for something with the power of the tank’s cannon and the portability and push-button-firing of the pirate cannon. Solenoid valves with a flow rate sufficient to vaporize meat don’t come cheap though. Here I’ll explain how I made that happen using only things that were already lying around the shop.

The air cannons we’ve built are simple devices. There is an air reservoir that holds high pressure air (or nitrogen, when we’re out and about and away from the air compressor), a barrel in which we stuff things like golf balls and meat, and a valve that separates the two. The speed with which the valve opens and it’s flow rate once opened play a big part in the power of the blast.

This is the tale of how I built my own pilot controlled valve; in this case, an electric [to pneumatic] to pneumatic control system for the new TE cannon. There is a more direct way to accomplish this, but it’s also a lot more expensive (and wasn’t as efficient at using things I already had around.) Should you be able to scrounge these parts, and they are around, you too can have a quick-opening, high flow rate, electrically controlled valve. This external actuation can be applied to mechanical valves of all sizes, and, as you may have already surmised, these low-buck high-flow valves are good for more than just air cannons.

This approach does admittedly seem kludgey. However, there are real valves that work in a similar fashion. It is known as an actuated valve, or a pilot controlled valve. Typically a valve would be either electrically actuated or pneumatically actuated, but we’re going with a junk bin hybrid approach and using both.

The operation is dead simple. Voltage applied to the solenoid will cause it to open it’s valve through which air passes to the pneumatic cylinder. Air pressure is supplied to the inlet of the solenoid valve from the same air pressure reservoir that will be used to fire the cannon. When pressure is applied to the pneumatic cylinder, it extends, mechanically operating the main valve that is installed between the cannon’s air reservoir and its barrel.

The solenoid valve and pneumatic cylinder sizes should, to the extent that your scrounging will allow, be chosen such that the piston of the pneumatic cylinder extends rapidly when pressurized. This will cause the main valve to open quickly and will generally increase the Fun Factor of whatever you’re doing.

The specific details of your build will depend on the parts you pull together for this valve. I will document here what I built.

Next, I fully extended the cylinder’s ram and fully opened the main valve. This showed me where the base of the pneumatic cylinder needs to sit. I used a long bolt to hold the cylinder in this position, which I welded to the nearby pipe nipple. The mounting arrangement for the base of the pneumatic cylinder will obviously need to be able to pivot as the piston extends and retracts. If you are not using a self-retracting cylinder, arrange for a spring here to retract the piston, and thereby close the main valve, when air pressure is released from the solenoid.

Finally, I plumbed air from the cannon’s air reservoir to the inlet side of the solenoid valve and from the outlet side of that solenoid to the port of the pneumatic cylinder that causes it to extend.

At this point, when the air reservoir is pressurized and the solenoid is energized, air pressure will flow to the pneumatic cylinder which will open the main valve. In this way, external electronic control – in our case a pushbutton, but potentially something far more interesting, like a microcontroller, a motion sensor, or a midi device – can operate a high flow rate, fast opening valve. To do this with off the shelf parts would cost hundreds of dollars, but you can do it with salvaged parts. This has potential for use in a huge variety of places: DIY manufacturing process control, a midi controlled pipe organ, computer controlled blasts of propane – and the list goes on.

With this particular cannon, potatoes will go through 1/2″ OSB at more than 50 ft. and golf balls will fly over 200 yards. And, while I would never recommend anyone else trying this, combustable liquids can be atomized, as you’ll see in a forthcoming TE video.