The 9,000-year-old remains of a woman were found buried with hunting tools in the Andes. 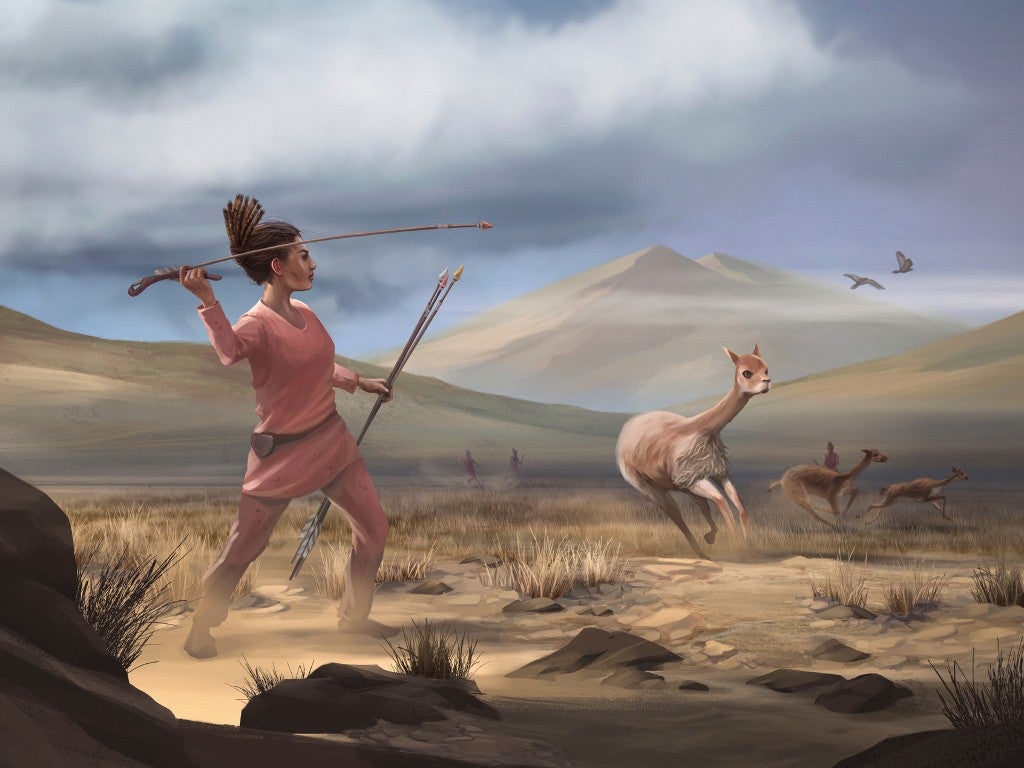 A number of researchers have speculated that some ancient societies might have had a more equal division of labor. Credit: Matthew Verdolivo (UC Davis IET Academic Technology Services)
SHARE

Women in early hunter-gatherer groups regularly hunted big game alongside their male peers, indicates a study published on November 4 in the journal Science Advances. Researchers excavated a 9,000-year-old partial skeleton in the Andes buried with hunting tools and determined that the remains belonged to a young woman. The team also pored over previous reports of human remains from this time period, and found numerous other examples of women in North and South America buried with tools used in big-game hunting.

“This was really surprising to us…given our understanding of the world, which was that in hunter-gatherer societies males hunt and females gather or process subsistence resources,” says Randall Haas, an archaeologist at the University of California, Davis. In more recent and contemporary hunter-gatherer societies, it’s uncommon (though not completely unheard of) for women to be big-game hunters, he says. He noted one contemporary example, the Agta (Aeta) people of the Philippines.

However, a number of researchers have speculated that some ancient societies might have had a more equal division of labor. “We think that people were engaged in more group hunting practices,” says Shannon Tushingham, an archaeologist and director of the Museum of Anthropology at Washington State University who was not involved in the research. “It would make sense that men and women and children were all dispatching these large animals.”

This may have to do with the tools hunter-gatherers were using, such as the atlatl, or spear thrower. Compared with bows and arrows that came later, these implements, while less accurate, could be mastered more quickly. “Children continue to get better at [using the] bow and arrow into their teenage years,” Haas says. According to one hypothesis, women might have had to begin spending time on childrearing before they could become fully proficient on the bow and arrow. “Once that happens presumably there would have been some disparity in access to or ability in the use of bow and arrow technology,” Haas says.

He and his team examined six skeletons excavated from a site in southern Peru, two of which were buried with hunting tools. The researchers determined that one of them had been a man between the ages of 25 and 30, which wasn’t all that surprising. The other grave, however, was particularly intriguing. “It had a much richer artifact assemblage than the others,” Haas says. Beside the bones were several stone projectile points that likely were used with an atlatl, as well as other equipment for butchering an animal and tanning its hide. “All these things together told us that this was a hunting toolkit,” Haas says.

When the researchers examined the size and shapes of the bones and the tooth enamel—which carries proteins that differ by sex—they realized that this hunter was a woman. Based on the condition of the teeth, Haas and his colleagues estimate that she was 17 to 19 years old when she died. The team also found remains of several large mammals at the excavation site, including taruca, or Andean deer, and vicuña, which are related to alpacas.

To find out whether the female hunter was a rare exception or part of a broader pattern in ancient hunter-gatherer societies, Haas and his colleagues examined records of burial sites across the Americas from the past 50 years. Of 27 people buried with big-game hunting tools, 11 were identified as female and 16 as male. “At that point we felt…pretty confident that there was something different going on among these past hunter-gatherer groups compared to more recent ones,” Haas says.

There are several other reasons why past scholars didn’t recognize the possibility that women buried with hunting tools were in fact hunters, Haas says. Generally, the tools found alongside ancient remains are ones they used while alive. However, items can be moved or mixed together later on because of burrowing rodents and other chance occurrences. Additionally, it has become easier in recent years to gauge the sex of poorly preserved remains. “Also, these burials are just rare,” Haas says. “It took this long for us to get a large enough sample to be able to zoom out and get the view from above.”

The remains and tools that Haas and his team analyzed provide evidence that women played an active role as big-game hunters in early societies, Tushingham says. “It’s innovative research that tackles…entrenched notions about gender roles in ancient societies,” she says. The findings are “really demonstrating that gender roles were much more fluid in the past, particularly early in time in the Americas.”