Or, how the Grouse learned to quit blocking ads and embrace the new world order 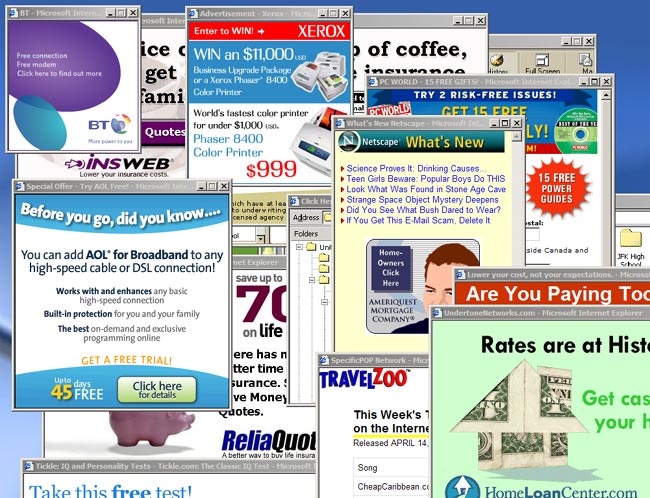 I’m going to be straight with you—if you don’t click one of the ads on this page, we’re all doomed. Maybe not today or tomorrow or next week; but if all those banners and pop-ups and pop-unders and interstitials and nagging floating ads continue to be ignored, or worse, blocked outright, we’re every one of us in a mess of trouble. I’m talking the entire high-flying media world dropping from the sky like flaming meteors. Like it or not, we’re all in an economic cold war. However, in this one, we’re fighting against ourselves.

Allow me a brief and flimsy anecdote: A couple days ago I’d turned off the pop-blocker on my browser to enable the function of some site or another and forgot to turn it back on afterward. After hitting a few more sites I was closing my browser window when I stumbled upon a pop-under ad. It kind of blew me away, like finding a T. Rex fossil in my backyard. Yes, I use the pop-up blocker because I’m aware that some sites unbelievably still employ that completely invasive, obnoxious method for pushing ads on viewers, but it had been so long since I’d seen one I’d kind of forgotten they even existed. Having discovered and quickly fallen in love with my browser’s pop-up, ad and flash blockers (as well as my DVR, for that matter), I’ve been enjoying a streamlined, advertisement-free experience. In fact, I don’t ever recall intentionally clicking on an ad of any sort online. I despise most every variety of ad in most every variety of media (though I still have a soft spot for some TV commercials). And now thanks to technology, I can shield myself from the clumsy advances of sausage-fingered marketers.

Yet, watching recent developments in our economy, and feeling some effects firsthand as a worker, I’m starting to understand why companies fight like frenzied piranhas to get a piece of me any way they can. And I now think maybe I have to be willing to let them get in a few nibbles for the greater good.

Once upon a time, all TV and radio companies earned their keep strictly from sponsors and advertising—the unspoken agreement was that media companies would make news and entertainment available in exchange for the chance for sponsor companies to market their goods. It was a winning formula for decades. (The print world is a slightly different story, as consumers pay for periodicals. Nutshell explanation: classified ads were long the bread and butter of newspapers, and for almost all magazines, advertising now largely accounts for any profits, with newsstand purchases and especially subscriptions adding far less income; they serve only to broaden circulation, which in turn generally increases ad prices.) Flash forward to the last twenty-odd years: Basically, companies got greedy, at the expense of the helpless consumer, and advertising began to take up more and more minutes per hour and more and more mind space. Consumers hated it but short of tuning out the world, had few options.

Then the great equalizer, technology, began trickling into consumers’ hands. With each major form of media, the stranglehold of the content providers was quickly broken by one innovation or another, and it’s been more or less a decline for all parties involved ever since: Record companies want to charge me $18 for a CD with 10 songs on it, and only two of them good? Fine, I’ll head to Napster instead. Want me to buy songs online, shackled with DRM? See you on Limewire, biatch. Want me to sit through five commercial breaks in 30 minutes? Screw that, I’ll TiVo it and watch it when I want, how I want. And so on, you know the drill.

The effect has turned the advertising world upside down, and has thrashed the content providers and creators in the process. There isn’t a single form of media that isn’t taking a serious clop to the chops (with the possible exception of video games. Hooray!) So right now it we’re in a weird decade-long transitional stage, where media producers are battling in a vastly more competitive market, with fewer resources as ad dollars are spread thin. These traditional outlets are further stymied as ad money moves toward supposedly greener pastures online. Which is where you and I step in.

Many of us stand high on our soapboxes to applaud the toppling of tyrannical corporate giants and the freeing of information, and indeed there’s cause for celebration there. But we’re in danger of chucking the baby out with the bathwater. The simple truth is, content in any form isn’t free. It takes labor to create it, and someone somewhere along the line has to pay for that. Spout your nihilistic nonsense all you want, but all the people who produce the music, movies, TV shows, photographs, news reports, and yes this column, need to buy lunch too, and so need to get paid by someone.

One of the great benefits of the online world has been the incredible specificity with which marketing can be targeted. It also means that for the first time ever, the effectiveness of ads (or the ROI–return on investment) is keenly measurable. Whereas before marketers relied on the voodoo that Nielsen and ad sellers spouted, someone today can put an ad online and know exactly how many times it was viewed, how many people clicked on it, how long it was watched, and whether a sale was made from it. This is great news for advertisers, and terrible news for the rest of us.

I submit that next to no one is watching 99 percent of online ads willingly, barring people like my mother who mistake them for actual content. To the contrary, most people I know do everything they can to avoid them. And it’s only going to get worse. I know that Google, the world’s largest purveyor of online ads by far, recently posted better-than-expected gains, but I think right now we’re seeing just the early stages of an unintentional pyramid scheme. There will of course always be advertising online, but as everyone continues to get more Web-savvy, all it would take is for Firefox to include an ad-blocker as a built-in feature and the jig would be up. In fact, the scheme may already be bottoming out as the price of ads based on pageviews has plummeted recently.

So what’s the alternative? I know of only two: Start paying subscription fees or perhaps micropayments for virtually every site you visit, which surely isn’t going to work; or, start clicking on ads and buying things from site sponsors.

But if you can think up others, share them in the comments section.