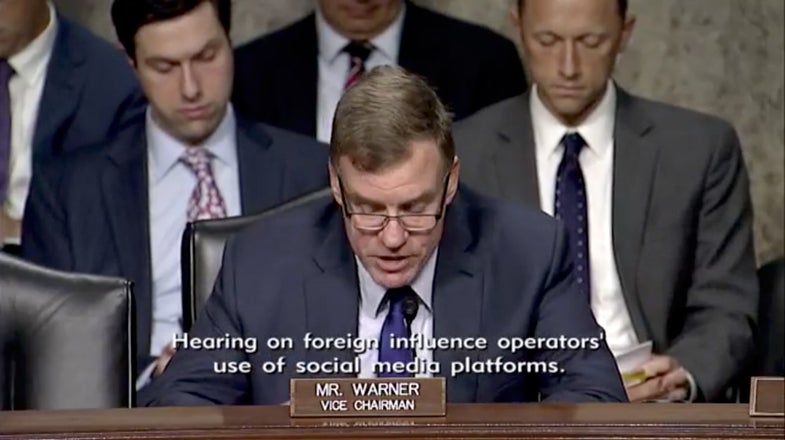 Executives from big social media and internet companies are making a regular habit of testifying in front of Congressional committees. The last time was back in April when representatives from Facebook, Google (by way of YouTube), and Twitter took the hot seat.

For today’s most recent hearing in front of the U.S. Senate Select Committee on Intelligence, Twitter and Facebook are on their own, since Google declined to attend.

Wednesday’s proceedings include a pair of hearings. The first is a look into the way the companies deal with foreign and malicious actors and transparency in regards to elections and political influence. The second hearing is specifically for Twitter’s CEO Jack Dorsey to address issues of bias and free speech.

Interesting statistics tend to pop up during these sessions, the most surprising of which today involve the sheer volume of fake accounts Twitter and Facebook claim to be fighting off.

Sheryl Sandberg from Facebook said anywhere between three and four percent of the accounts on the service at any given time are inauthentic. She also claimed that Facebook is turning away “millions” of attempts to create fake accounts every day.

Sandberg also reminded us of the 32 fake pages and accounts it took down in July, the more than 600 pages it took down in August from Iran and Russia, and revealed that 58 more pages from Myanmar were removed just last week.

Twitter says it’s removing 200 percent more accounts than it was before, and its evaluating 8 to 10 million accounts every week to see if they might be malicious bots. Dorsey also said the service has prevented half a million fraudulent accounts from logging in every day.

Twitter downranked 600,000 accounts due to an “error” in its algorithm

The key piece of the Twitter hearing is the idea that the algorithms treated some political accounts unfairly due to the behaviors of their followers. Dorsey says more than half a million accounts were downranked (what some call “shadowbanned”) because of bad behavior by their followers. Dorsey also claims that this is no longer one of the “hundreds” of data points that the service considers when deciding whether or not to show those accounts in Twitter’s “public spaces” like search results and autocomplete.

Most of the Senators were coy when bringing up the subject of government involvement in the regulation of social media, but the underlying theme was undeniable. Both Sandberg and Dorsey repeatedly emphasized how willing their services are to cooperate with federal agencies. Sandberg specifically mentioned more than once how helpful the FBI’s task force on social media has been since its inception earlier this year.

At one point, Dorsey revealed that Twitter had met with other social media companies to compare information about inauthentic activities on their services. He also said that Twitter wants to improve the extent to which it cooperates with other companies battling inauthentic behavior. “This is not something we want to compete on,” he said in one of his answers to Chairman Burr.

Sandberg was more vague with her answer, which suggested there had been a “series of meetings,” but that there’s “room for improvement” in that arena. Both executives suggested they are striving to do this more, presumably to subvert the suggestion that the government should mandate and regulate that conversation.

Some people are worried about bots

Many of the inauthentic accounts on various platforms are operated autonomously by bots that automatically post inflammatory content and interact with accounts. Several senators suggested Twitter start labeling accounts that are run by bots so users know they’re not dealing with a human. Dorsey, however, reminded the Senators that not all bots are malicious—in fact most of them are benign.

Dorsey said that Twitter can detect bots operating through the service’s API, but it can’t necessarily detect those using scripts to operate Twitter’s website or app, which makes them appear human. Adding a badge to bot accounts would give undue credibility to other bot accounts that were more successful in mimicking human behavior.

Facebook ran out its typical stat of more than 20,000 people dedicated to evaluating inauthentic behavior, but there was still a heavy representation of the idea that AI will help stem the tide of false information.

The Senators were really mad at Google for not showing up

An empty seat with a placard that read “Google” in front of it sat next to Sandberg and Dorsey on the Senate floor. Several of the senators specifically called out Google, going so far as to call the company “disrespectful.” Google put out a statement you can read here, but didn’t send a C-level exec to take questions. Senator Cotton suggests that’s because Google is busy working with China and didn’t want to take questions on the topic.

GDPR looms over the entire hearing

We didn’t hear a specific mention of the General Data Protection Regulation that grants EU citizens specific rights not explicitly afforded to American citizens, but several senators danced around the issue, especially when it comes to the idea of transparency and data portability. Clearly there’s desire for these kinds of personal rights, but Senators don’t seem willing to openly call for heavy regulation in this context.

There’s valuable information in banned accounts so both Facebook and Twitter keep them around, at least under certain circumstances, for further investigation.

Dorsey said that Twitter analyzes behavior patterns to help identify if accounts are malicious because it doesn’t necessarily have the same kind of personal and location information that Facebook has. After an account is suspended, there’s an investigation and that data may also end up in the hands of law enforcement.

Dorsey also said Twitter is considering transparency reports on suspended accounts that explain exactly why it was banned, what it was doing, and how many people it reached.

Facebook says it sometimes conducts its own investigations and keeps suspended accounts at the request of law enforcement, but exactly how long it holds onto that data isn’t clear.

During the questioning, Sandberg referred to a new service Facebook offers that vets drug rehabilitation services before they can advertise on the service because some of them were “doing harm” before. it’s another way in which third parties are helping social media companies try and sort out this problem of inauthentic behavior.

One point that came up more than once was the idea that Facebook should put a dollar amount on the money it can make off of your personal information. Sandberg repeatedly said that Facebook couldn’t accurately show a number like that, and it’s unclear what, if any, value that would have for people using the service.

There was a lot of talk about how social media “incentivizes” users to do things, including sharing stories and commenting on topics, which increases engagement and revenue for the companies. During the discussion, however, Dorsey explained that there was perhaps too much emphasis on follower count in the early days of Twitter, citing everything from the font used to show the number to its prominent placement on Twitter pages.

During Jack’s testimony, he said the company is still “early” in its efforts to train algorithms to recognize malicious activity. He says some features passed testing but failed later when rolled out to the full version of public Twitter.

Dorsey laid out four specific guidelines to help determine whether or not a discussion is healthy, but says those may change as they evaluate the results. The criteria are: