Something strange is afoot in the Crab Nebula. Famous for beaming a steady dose of radiation at Earth at regular... 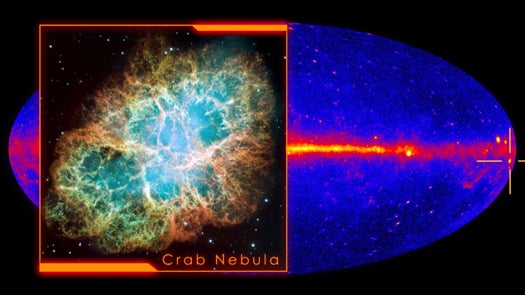 Something strange is afoot in the Crab Nebula. Famous for beaming a steady dose of radiation at Earth at regular intervals thanks to the spinning neutron star at its center, the nebula has long been of interest to astronomers. So one can imagine their interest when an enormous gamma-ray flare five times more powerful than any previously detected burst from the region, making these “the highest-energy electrons known to be associated with any cosmic source,” according to NASA.

The Crab Nebula is basically the remnants of a supernova located about 6,500 light years away (in Taurus, for those of you keeping tabs on the heavens at home). What was once the star’s core is now an expanding gas cloud anchored by a superdense neutron star that rotates 30 times per second, each time swinging a beam of intense radiation toward the Earth.

That’s been going on, from our perspective here, for thousands of years. And it’s been doing so with regularity, 30 times per second, ceaselessly. A handful of short-lived gamma-ray flares have been detected over the years, but nothing that fell outside the range of what’s considered normal cosmic violence.

Then, on April 12, the Fermi Gamma-ray Space Telescope–and later Italy’s AGILE satellite–picked up this monster of a flare 30 times more intense than the nebula’s normal energy output and five times more powerful than any previous uptick in energy. Four days later an even brighter flare erupted. Then, two days after that, the strange activity ceased without explanation.

Astronomers theorize that the flares must be coming from somewhere within a one-third of-a-light-year radius of that central neutron star, and that the area doing the emitting must be close to the size of our own solar system. And to offer some perspective on the energy unleashed, the electrons in these emissions must have energies some 100 times greater than the highest achievable energies in the LHC.

But what caused them is still unknown. The prevailing theory seems to be that the magnetic field around the neutron star suddenly rearranged itself, accelerating particles quickly to nearly the speed of light. As high speed electrons interact with the shifting magnetic field, gamma-rays are produced. Observations are ongoing. In the meantime, it gives us an excuse to post brilliantly pretty images of the Crab Nebula, like the one above.