The “Science” of Wind Turbine Syndrome

You’re going to hate me for this, but I swear it is necessary to prove a point: you are now... 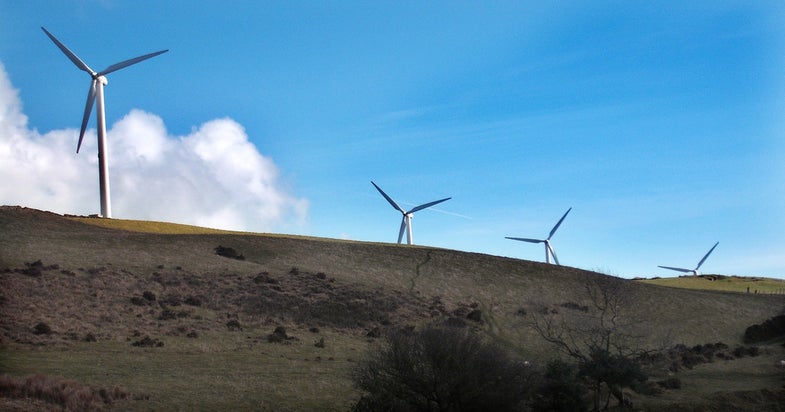 You’re going to hate me for this, but I swear it is necessary to prove a point: you are now aware of your tongue.

Before reading that sentence, your tongue was quiet happily relaxing in your mouth, taking a break from all that yapping you usually do. Now, though, it is self-consciously touching your cheek, scraping the bottoms of your teeth, and pressing itself to the roof of your mouth in an attempt to once again go unseen.

The same trick can be done about your breathing. Whereas usually you are able to accomplish this very basic life-continuing act with zero thought, once you think about it consciously it becomes a labored task that you cannot seem to do at exactly the correct rate.

My point is this: we don’t think about our bodies all that much. When we do, we notice things that are occasionally best left unnoticed.

This brings me to the news that several residents of a Cape Cod town called Falmouth have been diagnosed with Wind Turbine Syndrome. You can tell this is a real disease because the name includes the word “syndrome” and it was identified by a real doctor named Nina Pierpont. Sure, Dr. Pierpont is a pediatrician while those affected are adults, and sure, her husband is an anti-wind activist, and sure, her study had a small sample size of phone interviews with no control group or proper peer review, but the fact remains that she’s a doctor and she named it and so it exists.

Those suffering from Wind Turbine Syndrome live within a few miles of wind turbines and suffer from a mixed bag of problems like dizziness, mild nausea, insomnia, difficulty breathing, and/or headaches.

If I pause for a moment and really pay attention to my own body, I am currently suffering from mild nausea, difficulty breathing, and a headache. However, I do not live near a wind turbine, so I do not have Wind Turbine Syndrome. I do currently live within a few miles of an empty bag of “Fun Size” KitKats, so I believe I may actually have Halloween Candy Syndrome.

In the same way that the KitKats had a very real effect on my physical wellbeing, it may be possible the wind turbines are really doing something to the few residents to complain. Some of them guess that the problem is infrasound, audio with a frequency just below humans’ ability to hear it. Many studies do show that infrasound can disturb some people. For instance, Professor Richard Wiseman once subjected a theater audience to it and found that some people reported feeling slightly more uneasy or nervous compared to a control.

Of course, there’s quite a difference between blasting infrasound directly into a person’s face to cause mild uneasiness and having infrasound travel several miles through air (a poor conductor) to induce symptoms that make it difficult to go on living.

Most studies that test infrasound in laboratory conditions disagree wildly about what it does to a person and in what degree. You can read a long but fascinating review of the literature here but the end result is basically this: it’s complicated. When it’s difficult to find what infrasound does in a lab, it will take a Herculean effort to figure out what it’s doing in an open environment. Consider this anecdote from a scientist at Woods Hole Research Center:

Does that mean that her symptoms were all in her head? Maybe. Perhaps she just started noticing otherwise normal things about being alive – feeling a little nauseous, not sleeping well, being a bit tired – and she put them all together and blamed the easy target. Windmills have been the subject of a hot debate on the Cape for many years now. Before the Cape Wind Project was approved, residents fought tooth and nail to keep them out of their backyard, due to a disruption in yachting routes and a lowering of property values because they’d spoil the nice view. In fact, they’re still fighting. With so much anti-turbine hatred in the area, they’re the natural target when a mysterious illness takes hold.

Or maybe that woman “caught” a psychosomatic disease from her neighbors, in much the same way the children of Tanganyika suffered a laughter epidemic, or the locals of Strasbourg contracted the Dancing Plague.

Or maybe that woman really was suffering from infrasound, but it was being caused by something other than the Woods Hole wind turbine: large trucks on a nearby overpass, or construction of a building down the street, or a fan in the next room.

Because this is such a complicated situation, the residents of Falmouth who are suffering from these symptoms are in a tough spot. They probably feel as though the town isn’t listening to them, while Dr. Pierpont is. Unfortunately for them, Dr. Pierpont has utterly failed to do the amount of research necessary to help them. Instead, by completing a single sham study and labeling it “Wind Turbine Syndrome,” she has effectively sealed their fate as a laughing stock.