Science Slams Could Be The Future Of Communicating Research I may not be a scientist, but as the social media editor here at Popular Science, I appreciate an entertaining, well-constructed science story. So when one of my oldest friends, Tyler Corey, told me he was accepted as one of five finalists for a “Science Slam”—sort of like a competitive TED Talk—about his research at the University of Nebraska-Lincoln (UNL), I was excited to see what it was all about.

Tyler and the other four finalists, all graduate students or postdoctorate fellows at UNL, spoke on their “eureka!” moments, those specific instances in which they were inspired to do their research. For Tyler, it was reading a paragraph for his Tropical Ecology and Conservation class during his senior year of undergrad at Tufts University. The book, Tropical Nature by Adrian Forsyth and Ken Miyata, brought up an unusual order of arachnids that he’d never heard of before, amblypygids. Tyler even made note of this on a post-it note, writing, “These sound super cool. Amblypigids.” (He later laughed when sending me the picture because he had misspelled amblypygids as “amblypigids,” despite it being on the page in front of him.)

Tyler now studies amblypygids, also known as whip spiders (“which aren’t actually spiders” as he likes to remind me). He even traveled to the rainforests of Costa Rica to study them as a part of his research. He’s glad for that opportunity because “it shows kids that scientists aren’t just socially awkward nerds in white lab coats mixing beakers.”

The other reason he likes whip spiders is their uniqueness. The paragraph that inspired him describes them as “ominous creatures, black as the night and looking like flattened hybrids between a crab and a spider.” After reciting that description from memory, Tyler elaborated on his fondness for the creatures he lovingly dubbed “nightmare crab demons,” saying “They’re so striking. When I show someone a picture of them, it always gets their attention, which makes it much easier to share and teach.”

After watching videos of the Slam participants, I couldn’t help but wonder why I had never heard of this before, especially since it’s an event that combines science communication and audience participation in an effective and engaging way—something that is so central to my own job.

It turns out that Science Slams aren’t common in the United States—the organizers at UNL believe this is only the second such event in the country. But in Germany and throughout Europe these events are frequently used to promote science communication and literacy. The format started in Germany in 2006, as a way to encourage scientists to not just focus on sharing the results of their immediate research, but also on the topic as a whole, in “an understandable, entertaining, and concise way,” according to the movement’s official webpage in Germany. They’re also held in non-traditional venues (i.e. not lecture halls) to both make the audience more comfortable and force scientists to “leave their ivory tower and become a part of popular culture.”

Jocelyn Bosley, an Education and Outreach Coordinator at UNL’s Materials Research Science and Engineering Center (MRSEC), helped put UNL’s Slam together. This past Fall, she gave a presentation about the Science Slam Movement, which inspired Tyler to participate. During the presentation, Bosley explained that ‘Science Slam’ gets its name from another popular performance type—the poetry slam. Tyler, in addition to his scientific endeavors, is a musician and a stand-up comedian, so the idea of entertaining a crowd while talking about his research seemed ideal to him.

The term Science Slam is also deliberately not copyrighted, Bosley said in her presentation, so anyone in the world can use it for an event. However there are some general guidelines that distinguish a Slam from any other form of science communication. Here’s an excerpt from Bosley’s presentation: 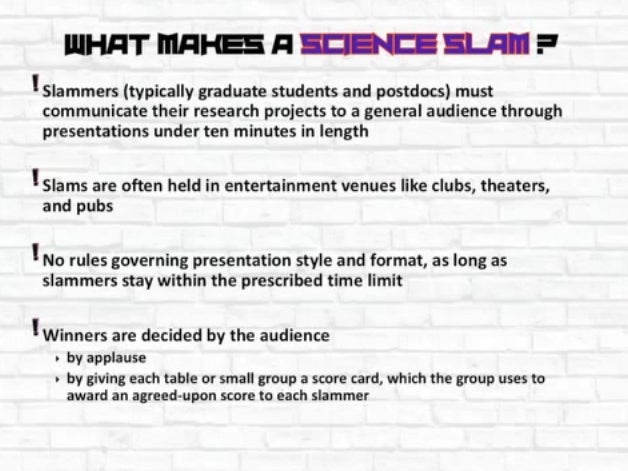 According to Bosley, the audience and the competitive nature of the event are really what separate Science Slams from other forms of science communication. The audience members aren’t just passive recipients of knowledge, she says, rather they play a key role in deciding the outcome of the Slam. “[This is] perhaps as important a part of promoting interdisciplinary collaboration as putting the content out there in the first place,” says Bosley. “It also puts the responsibility squarely on the Slammers to ensure that the audience ‘gets it.'”

What’s in it for the winning Slammers? A prize, usually monetary, and a new line of notoriety for their CVs.

Organizing an event that relies on both presenter and audience participation has its difficulties. MRSEC Associate Director Axel Enders, another Slam organizer, told Popular Science that UNL was an ideal environment for a Science Slam. He says the organizers had to think outside the box and risk trying something new, which they were able to do because of the support of their administration. “And of course you need great students who are crazy enough to get involved, and a campus culture to support this.” UNL also hosts cross-disciplinary events at the faculty level, which inspired Enders and Bosley to host this event for students.

Ironically, it takes a lot of communication and publicity to set up an event about publicly communicating. Enders calls the amount of publicity for this event, including flyers, emails, personal invitations and a social media campaign, “unprecedented.” However, it makes sense to do so much. The driving force behind a Science Slam is spreading the passion of these scientists and informing the public of their research in a way that is both fun and informative. To help spread this message as far as possible, reporters from local newspapers and tv stations were invited and in attendance during the event.

It will take even more though to grow the Science Slam movement across America. Bosley says that a major problem with getting people involved in activities like this is that in the academic world, they are often seen as something extra, or as going above and beyond. “They aren’t always as valued within the academic culture as the ‘bread and butter’ technical presentations.'” However, she hopes this may change soon. “As the [National Science Foundation] and other funding agencies place more emphasis on the broader impacts of research, this may be starting to change a bit.” She thinks Science Slams could fit seamlessly into this change. Enders does too, and told Popular Science that perhaps someday UNL could host a national Science Slam, with competitors from institutions around the U.S.

Tyler was the winner of UNL’s inaugural Science Slam, and he’s also hoping the movement grows throughout the country. “It gave us the chance to get up and be ourselves in front of a group of people,” he says, and perhaps more importantly, fight the stereotype that those working in STEM fields are “faceless data machines.” He continued, “People too often only see headlines with ‘scientists’ or ‘researchers’ but these are hard-working, passionate, dedicated people.” Breaking that stereotype is imperative to improving science literacy, but as the Science Slam teaches us, it’s as much the responsibility of the presenter to make sure the information is told in an engaging way as it is on the audience to reach outside their comfort zone and try to learn something new. If other institutions conduct Slams that see the same success and audience engagement that UNL had, then perhaps in the future, the events could be live-streamed around the globe or even adapted to other disciplines. In this way, Slams have the potential to inspire an entire generation to follow their passions.

You can watch UNL’s Science Slam in full above.

Correction: An earlier version of this article incorrectly stated that Tyler took Tropical Ecology and Conservation during his sophomore year at Tufts University. He actually took it during his senior year, and the error has been corrected.