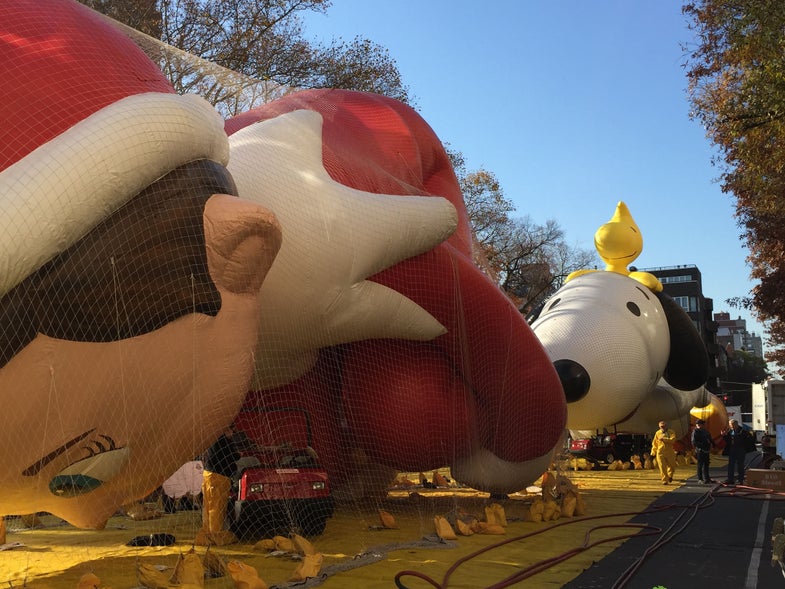 The Macy’s Thanksgiving Day Parade happening today in New York City is, like the holiday itself, a time honored American tradition. And with just over 60 balloons in its parade, Macy’s is also one of the nation’s largest consumers of helium. But what does it actually take to inflate those gigantic balloons? Popular Science spoke with Richard Dinwiddie, a plant manager for Linde, a New Jersey based gas supplier that provides all the helium used to inflate the parade balloons.

Using a Ricoh Theta S camera, Popular Science assistant editor, Claire Maldarelli, filmed part of the inflation process, which takes place every year the day before the parade at a staging area near 77th street and Central Park West. This past month, Facebook introduced the ability to upload and watch 360-degree videos on all devices. Watch the video above, and then read about the calm chaos that occurs the day before parade day, and lookout for more 360-degree videos from Popular Science in the future.

What is your part in the parade?

Our company, Linde, provides all the helium for every balloon and I oversee the crews that are down here to make sure we are at the right spot and are on time.

How many balloons are in the parade and how much helium do they use?

They have 60 balloons plus some smaller ones and each balloon has a different amount of helium. The total volume of helium that we use for all the balloons is about 300 thousand standard cubic feet. To give you some perspective a typical Mylar ball, you would need 500,000 of those.

How do you get the balloons ready for the parade?

The helium arrives on the trucks and is compressed at 3,000 PSI, which is too strong for the balloons to handle. So first we send it to the regulator box, which brings it down to 100 PSI. Then to fill up the balloons, we fill each one up piece by piece. Each balloon is not just one balloon. Looking at Snoopy here, Woodstock is its own chamber, his arm is a chamber, and his foot and leg are also separate chambers. So its not just one big balloon. If you poke a hole in something, it’s not necessarily catastrophic. You can just patch that one area and then refill that chamber.

How long does it take to fill up each balloon?

It depends on the balloon. Thomas the Tank Engine is one of the largest volume balloons that Macy’s has and it takes about an hour to an hour and a half to fill the entire thing. Snoopy here behind us, since it doesn’t have a lot of chambers, we will have that one done in about 45 minutes.

We inflate them on Wednesday so that if something goes wrong we have time to recover. We fill them tonight and then come back at about 4 AM tomorrow morning to see if any of them need to be topped off.

What happens when you fill it up too fast?

You definitely don’t want to fill it up too fast because there is heat involved, where you have expansion and contraction of the gas. As the helium is flowing in, that generates heat so if you put too much gas in at once, you could damage the balloon. But by dropping the pressure down [before you add the helium], that is less likely to happen.

How does weather affect the balloons?

Since the balloons contain compressed gas, the colder it is the more the helium inside the balloons is going to contract. Right now we are at 55 degrees but over night, it will dip down into the 40s so when we come back, they are going to feel like they lost helium but really the gas has just compressed. So we might put a little bit in each one.

What are you most concerned about on the day before and on Thanksgiving morning?

For Macy’s, a balloon getting away is probably the worst-case scenario but for us on the ground, it’s the weather.

What is your favorite part of the job?

It’s really fun to be here and I enjoy inflating the balloons that bring joy to people around the world. Being right in the middle and having a part in all of this is definitely my favorite part.