Or, how to look like you're innovating while actually doing everything to keep the status quo. 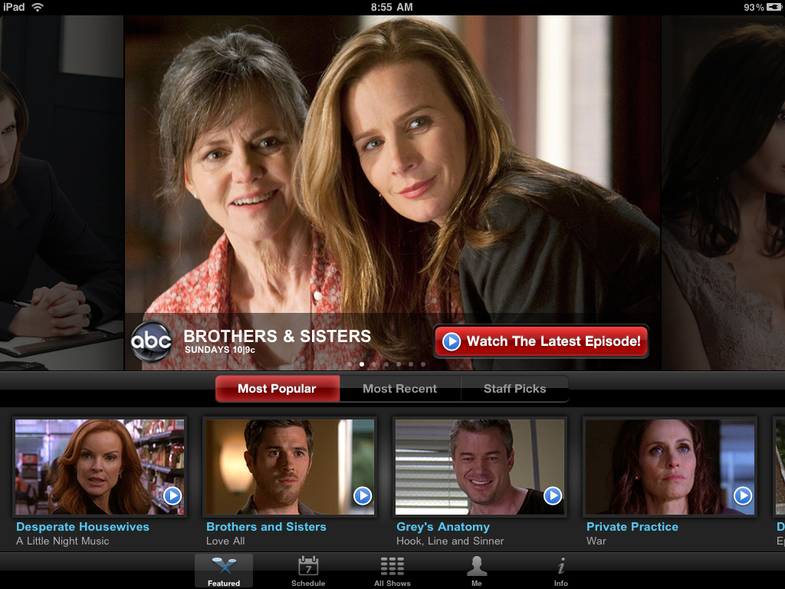 The New York Times reports that ABC is working on a streaming video app for mobile devices, one that will allow you to watch ABC shows on your smartphone or tablet. The details haven’t been confirmed, but if what the Times hears is true, this app will be…pretty bad. It’s perhaps the clearest indication we’ve seen yet of a content provider digging in their heels and aligning themselves not with customers, not even with creators–but with cable companies.

The app is rumored to be a simple live stream of the ABC feed–“a live Internet stream of national and local programming.” There’s no mention of any time-shifting ability that’d let you watch a previously-aired show; the examples given rely on turning your mobile device into just another screen that can snag ABC. This is different from something like Hulu or Netflix, which both offer ABC content, because Hulu and Netflix offer on-demand content. This would be just as if you turned your TV to ABC. And on top of that, apparently you’d be required to have a current subscription to an approved cable service to even get that much.

This is like the least useful possible version of the phrase “ABC mobile app” that anyone could have come up with. It seems to be inspired by two services. The first is HBO Go, but HBO Go is, well, good. It has a deep catalog, so you can watch any of its stellar older series, it has apps for other devices like Roku and Xbox 360, it lets you watch the show you want when you want to watch it. It is a good service. The authentication, in which you have to register that you do in fact pay Time Warner, Comcast, Verizon, or whoever else for cable, that’s a pain, but theoretically, you shouldn’t be able to watch HBO shows unless you had cable anyway. That’s the only way to get HBO shows! But not ABC.

ABC is a free broadcast network. If you live in America and you spring for a $20 digital antenna, you can get ABC for free. Let me say that again: ABC is free. It’s ad-supported, and, of course, those ads will still be on your iPad, since all you’re getting is a direct feed of the channel. Also, the rumored app has basically no features you’d want, so there’s that.

The other service that comes to mind is Aereo, a small and lawsuit-plagued startup based in New York. Aereo has a warehouse with thousands of tiny antennas, then charges users a monthly fee to “rent” one. Then it beams broadcast TV to your computer or mobile device. But Aereo is a time-shifting concept as well–you can pause and rewind, save for later like a cloud-based DVR. ABC’s service wouldn’t let you do any of that.

What grates about this is the brazenness of ABC’s desire to appear modern while in fact doing everything it can to avoid modernizing. To board members, it sounds great. ABC is with it! They get the internet! iPads! But in fact it’s not modern at all; it’s digging its fingernails ever harder into the gut of the old ways. ABC’s reason for working on such a garbage project is simple: it wants to avoid rocking the boat. Ad revenues are far more lucrative in the live stream of ABC than in time-shifted on-demand services like Hulu. And ABC, don’t forget, isn’t ABC–it’s the Disney-ABC Television Group, which also includes Lifetime, A&E, the Disney Channel, and more. The company needs to keep the cable companies happy and it needs to keep its local affiliates happy; that’s where their money comes from. Requiring that only cable subscribers get access? That’ll keep the cable companies happy.

The Times piece, despite all of this, is fawning. Here’s a blurb:

Executives at other networks who have heard about the ABC plan regard it with a mixture of awe and fear. No other broadcaster is believed to be as far along as ABC, which is also the first broadcaster to sell TV episodes through Apple’s iTunes store and the first to stream free episodes on its Web site.

If anyone has fear, awe, or any combination thereof, they will be knocked right over when I tell them about how raisins are actually just dried grapes, because this is the least “disruptive,” least “innovative,” and least risky move ABC could’ve possibly made.