FYI: Why Would Someone Create A Fake Internet Girlfriend?

Put some people in front of a screen, and they won't always reveal the most truthful information. 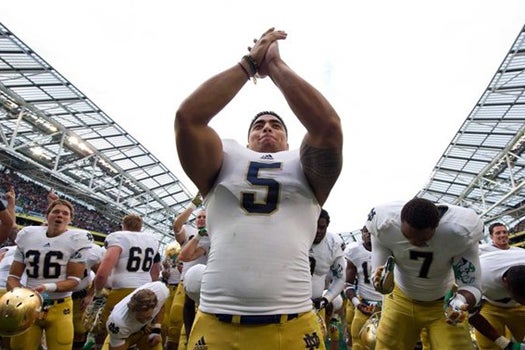 This week, Deadspin broke the news that Notre Dame football star Manti Te’o’s dead girlfriend–one of the most heartbreaking sports stories of last year–was a hoax. The fake girlfriend was created by a 22-year-old guy named Ronaiah Tuiasosopo. Turns out, Tuiasosopo might’ve engineered other false personalities, too. We had to ask: What would make someone do that?

The short answer is, some people look at the internet and, subconsciously, see a chance to experiment with identities, free of consequences. Those people can be shy or outgoing, cheerleader or geek, but there seems to be some kind of personality type that changes when given a megaphone and the shelter of anonymity. We don’t know who, exactly, will be the ones to open up–it’s even debatable if it’s an “opening up” or a chance to act out of character–but for some reason, there’s a small segment of the population that’s prone to deception, given the right forum.

Sure, everyone lies a little. Technology has–and has always–helped us fudge the truth. Jeremy Birnholtz, an assistant professor at Northwestern University, studies so-called “butler lies,” small fibs created by the ambiguity of technology or gadgets in the vein of a butler telling a visitor the master isn’t available. Running late? Tell your friend his text didn’t go through; he’s got no way to pin it on you, anyway. A face-to-face conversation takes away some of that ambiguity.

If we wanted to extrapolate to bigger lies, we can look at a related, widely cited theory about anonymity: the online disinhibition effect. It’s worth reading the entire article, but the short version says giving people a platform–especially one where they’re invisible–is enough to make them act out. What we can’t say for sure is who’s going to exhibit the effect. The paper’s author, John Suler of Rider University, explains why:

Personality styles [vary] greatly in the strength of defense mechanisms and tendencies towards inhibition or expression. People with histrionic styles tend to be very open and emotional, whereas compulsive people are more restrained. The online disinhibition effect will interact with these personality variables, in some cases resulting in a small deviation from the person’s baseline (offline) behavior, while in other cases causing dramatic changes. Future research can focus on which people, under what circumstances, are more predisposed to the various elements of online disinhibition.

What’s more, Birnholtz explains, social media has made lies more viable by changing our expectations for truth. He says the leading theory of online identity used to be reminiscent of the old New Yorker cartoon: “On the Internet, nobody knows you’re a dog.” In other words: people use the web to try out a different identity.

But recent research shows that’s not what’s happening, Birnholtz says. People, for the most part, just want to be themselves online. In fact, the truth is the rule, not the exception, for the most popular forms of social media.

That guy with a throw-away account in the comments section or on Reddit could be a doctor, sure, but most people aren’t banking on that. Take Facebook. It’s a supremely self-correcting ecosystem. You can lie, but the expectation for truth is high enough that the lie will be pointed out. In other words, so many people aren’t lying that users are primed to expect the truth. All of those fake share-this-to-donate-money links on the social web keep getting shared for a reason.

It’s a tangled web we weave: Yes, (some) people are more likely to act out, and deceive, on the internet. Today’s internet is more widely self-correcting, but at the same time, a subconscious expectation of truth might make us less prepared when a lie does come. Might not be such a bad idea to always assume you’re talking with a dog.