A fawning Bravo reality show skewers Silicon Valley more effectively than anyone else who's tried (and many have tried). 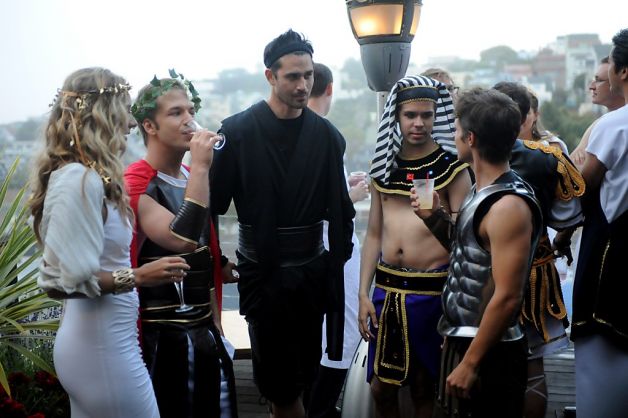 In a spectacular Sufjan-Stevensesque gimmick, Bravo has quietly pledged to create a television series about every single pocket of horrible rich people in the entire country. That includes housewives made of the same soft-touch plastic as many smartphones, trust-fund art gallery interns in New York, bipedal snake-monster matchmakers, and now, in Start-Ups: Silicon Valley, soulless husks of Ruby code in Silicon Valley. It is a performance art project of horrific proportions, a mirror held up to the American dream. You want to be rich? Here’s what rich looks like. This will be shown in the Guggenheim in 40 years, probably.

So, Start-Ups: Silicon Valley. It’s a show, co-created by a company called Zuckerberg Media (Mark’s sister, apparently), with the same rough format as the Real Housewives series. We follow a handful of pretty people (eight, in this case) who have kind of met before but are now presented as the key members of a tight-knit group, as they go about their daily lives, interacting with one another and pursuing their own dreams, which are often just to be on television. Their daily lives, in this case, are a combination of sitting in offices actually making things, asking rich people for money to continue making those things, and (mostly) getting rip-roaring drunk and yelling at each other. And we’re watching it because those things that they make? Those are things we care about. I mean, the things that these specific people make, neither we nor anybody else cares about those. But in a larger view, this culture and this area is responsible for things we use every day. One cast member gives a partial list of those dominant companies–Facebook, Google, Apple. And many of the smaller guys as well. So, that’s why PopSci is covering this show. It’s not why I in particular am watching it, but it’s why I’m allowed to write about it on this site.

Here’s the cast, and the awful app or service or company for which they are trying to secure millions of dollars in venture capital money:

Ben and Hermione Way are from England. They say “bloody” a lot. They were separated at a young age, sort of like in the Lindsay Lohan film The Parent Trap. Each child was taken by one parent until 20 years later when they spontaneously met up in Thailand (accidentally? It’s a fair-sized country) and then began a borderline-inappropriate relationship in San Francisco. Now they live together and work together and sort of act like they’re dating each other? Like they don’t make out or anything but I’m just saying they have a type of intimacy that is uncommon among siblings. On the other hand perhaps this is just a thing I do not understand about England! I have never been to England.

Their worthless app: Ignite, a fitness tracker app, sort of, that measures how long until you die. If you stop smoking cigarettes or if rage-watching television is found to be healthy, you will die a little later, and that will be reflected in the app. It currently has two and a half stars in the App Store, with reviewers calling it “hard to understand,” “too complicated,” “glitchy,” and “a complete waste.” Also one person gave it five stars and said “I am a dedicated Bravo viewer.” I downloaded the app but it only told me when I would die, not when other people would die.

Sarah Austin is like iJustine or one of those other people (they are all bland pretty blonde ladies but it seems uncouth and maybe sexist to say “one of those bland pretty blonde ladies” so I’m saying “people”) who just takes video of themselves and puts the video online and learns the word “innovation” and how to make portmanteaus, but not the word “portmanteau,” and invents a portmanteau like “lifecasting” and proceeds to do that. At one point she mentions how much she charges for a tweet. It’s more than I charge for a tweet. At another point she calls Silicon Valley “a 20th-century gold rush,” which is actually a very accurate thing to say, because it is a desperate movement to extract money and run and also lots of people will be eaten by mountain lions in the hills of California.

Her worthless app: She makes videos about her own life at something called Pop17 and sometimes other people pay her to appear in videos where she tells us how many people are using Facebook right now and other cool tech stats.

David Murray used to be fat and now he is not fat. In this episode he gets a tan.

His worthless app: David has an app called Goalsponsors [sic] which is a list of goals, I think. He says this is because he improved his life and wants to help improve other people’s lives, and at first it’s like, well, he lost a lot of weight, that’s cool and good and healthy, but then he also got a ton of plastic surgery and lasered the hair off his back and got hair plugs and you think well, I don’t have a moral problem with that stuff, but maybe his self-regard is not as healthy as it seemed and maybe he shouldn’t be pushing it on other people?

For all the work he had done, he looks pretty normal. Just a normal dude. Which is cool I guess.

Dwight Crow is a superbro. He is one of two people (the other being David) who explains his startup in layman’s terms to someone who definitely already knows what his startup is, in this case his own goddamn business partner. He drinks a lot and is loud and obnoxious and should probably be on the Real World/Road Rules Challenge bungee-jumping off of Turkey’s highest building or whatever.

His worthless app: Carsabi, a search engine for used cars. I typed “Nissan Sentra” into it and the first two results were a Dodge Grand Caravan minivan and a Mazda6 station wagon. Keep coding, bro.

Kim Taylor drew the short straw and was contractually obligated to be the one who “tells it like it is.” So, she is kind of rude. Also she was a dancer for a basketball team and says that in most of the country that would be super cool but in Silicon Valley it is super lame. Later she will wear a revealing dress.

Her worthless app: Ampush Media. It’s not an app, but I am not entirely clear on what it really is. Here’s what their site says: “We combine market intelligence with data-driven analytics to convert clicks into high-value customers.” That is startup-speak for “we do not really do much of anything but we have exposed brick in our office.”

Jay Holanda and Marcus Lovegood were introduced in the pilot but we didn’t learn anything about them. Bravo’s site shows that Jay is a model who wears horrible jeans and Marcus works with an LGBT Super PAC which, well, that’s hard to make fun of, there’s a good chance he’s actually doing some good in the world. You’re fired from this show, Marcus. There’s no place for you here.

What Happened This Episode?

The Brits threw a party, which was toga-themed, because there is only one type of themed party. “Nobody goes out clubbing here,” says Lady Brit, “it’s all about costume parties at people’s houses in the startup world.” Then their worthless app gets rejected. The teasers for the next episode indicate they will be rejected several more times.

Lifecaster Sarah got in a fight with Lady Brit about a perceived slighting at a previous year’s South by Southwest festival. They yelled at each other on a bed and then Lifecaster Sarah asked if Lady Brit was upset that she made out with Gentleman Brit. See? Weird.

Not Fat Anymore David got a tan, did I mention he got a tan? He got a tan.

Obligatory Rude Girl was rude to her coworkers for no reason but then seemed pretty close to reasonable. She told Superbro that his second party was really lame, which it was. That wasn’t rude, that was pretty cool I thought.

Jay and Marcus were kind of around but I don’t even think they got a title card telling me what kinds of entrepreneurs they are. Serial? Successful? Pioneering? I have no idea!

The Bravo Reality Show (BRS) is scathing satire. A BRS looks like it’s glorifying the lifestyles of those depicted–look how rich! Look how well-groomed, how well-sculpted these people are! They drink alcohol and have sex (cool!) and are on TV which is in itself something to be glorified. But these shows are not that. A BRS cast is made up of people whom you will hate, and maybe one person you would hate in real life but whom you will decide to “kind of like” on this show. And Bravo actually has interesting taste in picking out these people. Startup culture, whether it’s in Silicon Valley, Brooklyn, or Austin, is a repulsive swimming pool of rancid money which you can only get by wholly diving in and combining the right combination of buzzwords. You open your mouth to say “disruption” and the foul currency flows in. And it’s made worse by the fact that good stuff does sometimes come out of it. We all like Instagram, right?

Of course, Bravo is not really interested in finding the next Instagram, or even the next Path. It’s interested in the hangers-on, the pretty folks who move from weird places like Milwaukee and England, who come with ladles in hand to scoop from the pool of disruption with nothing of particular value to offer anyone in exchange. And thank god Bravo decided to aim its laser-sighted BRS gun at this place and these people. It is fantastically cathartic and fun to watch.