Google’s experiments with social media have largely landed with a particularly embarrassing thud–Buzz was a security nightmare, Wave was incomprehensible,... 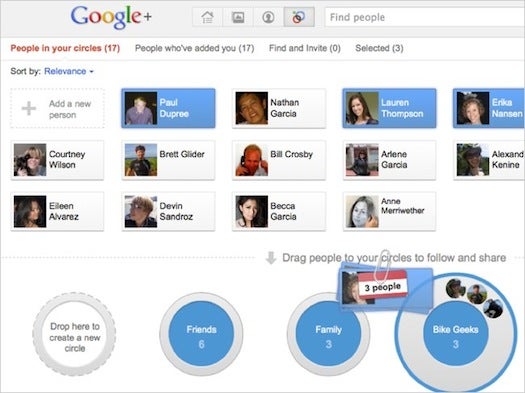 Google’s experiments with social media have largely landed with a particularly embarrassing thud–Buzz was a security nightmare, Wave was incomprehensible, and Orkut is only popular in Brazil, for some reason. But Google is nothing if not determined, and today announced its biggest social push ever: Google+. It is definitely similar to Facebook at first glance, but there’s a fundamentally different idea underlying Google+ that separates it from the pack. Facebook was an outcropping of networks like MySpace and dating sites–centered around the profile page. Google+, though, is a sharing engine.

Google+ is, despite that difference, essentially Google’s riff on Facebook. It may not seem all that new at first, but it is a very big idea and implemented into Google’s myriad properties, especially Gmail, on a scale we haven’t seen before. Facebook was an outcropping of networks like MySpace and dating sites–centered around the profile page. Google+, though, is a sharing engine. Google describes the main thrust of Google+ as sharing: It’s designed to let you share status updates, links, videos, and whatever else with exactly who you want.

To do that, Google created “Circles,” which are essentially groups into which you place specific clumps of people–family, friends, co-workers, that kind of thing. Sharing is done to those circles, rather than to everyone in your social network (which might include coworkers, exes, relatives, and other undesirables). The layout of the Circles is pretty cute; removing a contact from a Circle blasts them into a puff of smoke, to which you are free to add your own laser noises. Interface has historically been a weak spot at Google, as many Android owners (or foes) will tell you, but the head of design for Google+ is an ex-Apple designer who seems to be overcoming Google’s design woes.

There are a few other ways to communicate with a set group of people: There’s an instant-messaging-type service for small groups, and a video chat service called Hangouts that lets you spontaneously jump into group video chats. The latter feature is definitely something we haven’t seen before, and it’s emblematic of Google’s new strategy with Google+: Google wants you to spend as much time as possible in Google+, rather than the typical Google method of getting you in and out with your data quickly.

Then there’s a feature called Sparks, which is sort of like an automated news feed–add your interests, and it gives you a stream of things you might care about, a bit like StumbleUpon, which you can then share with whomever you want. Presumably, Google Reader, Google’s excellent RSS reader web app, will also have lots of Google+ sharing options. Sparks will run alongside your social feed (updates and shared items from people you know), though Google hasn’t ruled out combining the two feeds sometime in the future.

Your actual network is created from other Google users, but you can add anyone, even if they don’t want to use Google+. Just add an email address to a Circle, and that person can be emailed updates just like everyone else. According to this startlingly in-depth look at the birth of Google+, Facebook integration is not in the cards–apparently, Facebook is unwilling to work with an obvious competitor.

Google+ will be all over Google; aside from an Android (and, soon, iPhone) app, you’ll see a link to your Google+ page whenever you use any Google web service, alongside the links to search, Maps, Reader, and all the rest. It’s in a small private beta for now, as Google works on the kinks to avoid another Buzz situation. But this is going to be a major part of Google’s identity from now on–if we’re to believe the hype, this isn’t just a new app. This is a new direction for Google itself. Whether people will use it…well, that remains to be seen.