This Is The Defining Photo Of Virtual Reality (So Far)

When Mark Zuckerberg walks through a forest of VR headsets, does anyone notice? 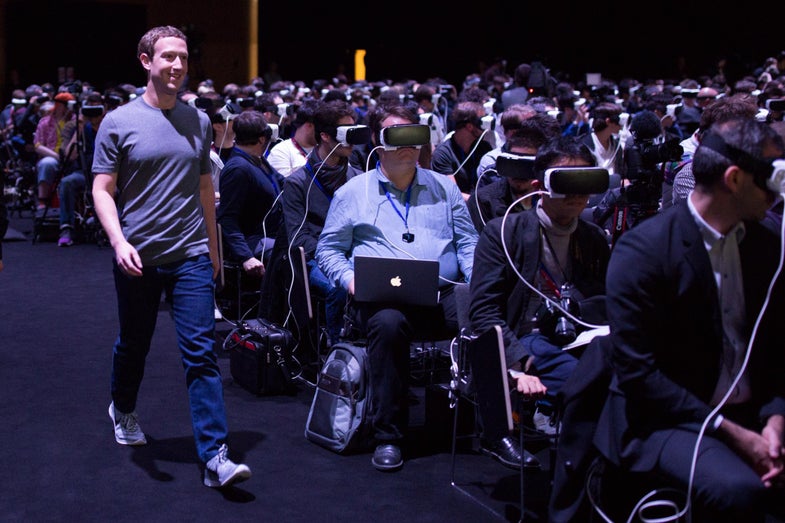 Virtual reality has never looked cool. For all of the technology’s far-reaching promise, from the time when VR as we know it first began appearing regularly in film and TV in the late 1970s, the technology has always seemed pretty goofy: a person sitting slack-jawed, wearing a goofy helmet, spasmodically reacting to unreal apparations that only she or he could see.

Later attempts to make virtual reality look dark and edgy in the 1990s, in films such as Lawnmower Man and The Matrix and the other, often overlooked Keanu Reeves cyberspace movie, Johnny Mnemonic, succeeded less in making VR look appealing, than in making it look threatening and dystopic. Last year, virtual reality’s buffonishness reached an apex when Palmer Luckey, the young founder of Oculus VR, appeared on the cover of TIME Magazine in an illustration that was quickly mocked and Photoshopped into silly memes around the web.

Now that virtual reality is finally becoming widely publicly available — in the high-end forms of Facebook’s Oculus Rift, the HTC Vive Pre, and Sony’s Playstation VR; on the low end, Samsung Gear VR and Google Cardboard — it’s fitting that the defining image of our blossoming era of “real” virtual reality falls somewhere in between these depictions: at once both lame and deeply unsettling.

The photo above, taken yesterday by someone at Facebook during Samsung’s presentation at the Mobile World Congress tech conference in Barcelona, Spain, shows Facebook CEO and VR evangelist Mark Zuckerberg walking through the audience to get to the stage.

Before the event started, Samsung gave all the seated attendees their own Samsung Gear VR headsets, and told them to put them on as the presentation got underway. Zuckerberg was there to talk about Facebook subsidiary Oculus VR and its collaboration with Samsung on the Gear VR headset, and he later posted the photo to his public Facebook page.

There are several aspects of the photo that made it immediately striking to me, and have made it downright haunting now that a few hours have passed since I first saw it:

Others in the media have had similar reactions to the photo. And I don’t mean to get too carried away. Lots of new technology seems weird and even scary at first. I’ve tried a few virtual reality headsets, including the Gear VR pictured and an earlier version of Facebook’s Oculus Rift, and both were definitely entertaining and novel, though they quickly grew tiresome.

In some ways, the photo is not very different from any scene you could photograph in any public space in America today, except instead of people immersed in virtual reality, they’re immersed in their smartphones. Before smartphones, it was TV that was supposedly going to ruin, or ruining, society. Come to think of it, it reminds me a lot of this old photo you’ve probably seen, of a bunch of people on a train car wholly absorbed in their paper newspapers, also completely ignoring one another.

So I don’t want to make the leap that one unflattering photo is representative of a coming VR dystopia. But photos like this do make you think about the role technology is playing and should play in our lives, the kind of world we want to live in. It’s sort of ironic that virtual reality, which promises to make us feel transported to new worlds in ways that other, older media never could, has been so thoroughly summed up in a single, 2D photo — a technology that has been around for about 200 years.

Yet this photo does a great job of capturing virtual reality as it stands today: promising and potentially appealing to masses, but still pretty weird IRL.