How scientists can be sure that Kilauea won’t turn into the next Mount St. Helens

It's all about their chemistry. 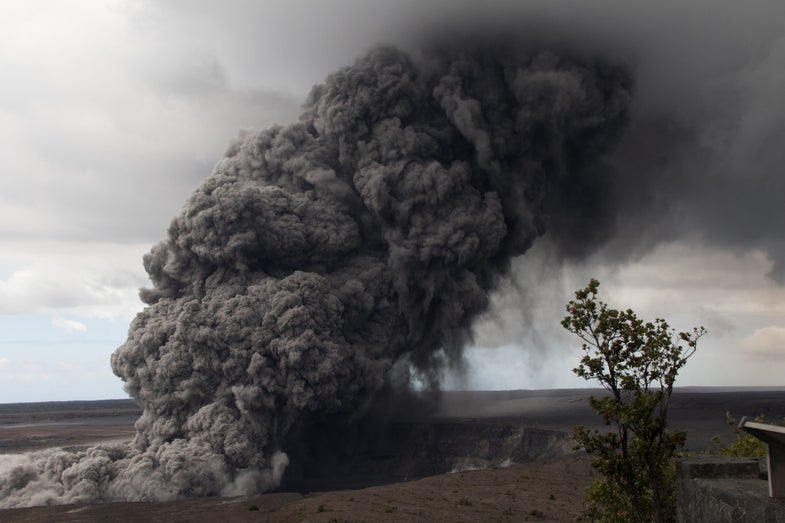 An ash plume rises from the Overlook crater on Kilauea's summit on May 15, 2018. U.S. Geological Survey
SHARE

Ever since Kilauea started its latest eruptive phase, with fissures of lava opening in a neighborhood on the Hawaiian volcano’s flank, people around the world have been mesmerized by the incredible pictures of the Earth in action.

Yesterday, Kilauea had its biggest explosive event yet at the summit, sending ash 30,000 feet into the air just before dawn. The column stretched above the cloud tops, providing an observatory on Mauna Loa with this amazing view of the plume.

We also observed a volcanic explosion in addition to the Galactic center tonight!

This was a fascinating event, and it’s not even the most energetic explosion that Kilauea could produce, though the ash column was very high. But even the largest possible explosive event from Kilauea would still be tiny compared to other volcanoes around the world, from Krakatoa to Mount St. Helens to Vesuvius. In comparison to those massive fireworks, Kilauea’s explosive efforts are like those tiny bang snaps you’d throw against the driveway on the 4th of July.

That doesn’t keep people from making the comparison, and worrying that the eruption at Kilauea might turn into something vastly different. Answering people’s questions about the event is keeping professional volcanologists and the social media team at the United States Geological Survey very busy. They’re constantly reassuring the public that Kilauea’s eruption will not turn into an event like Krakatoa or Pinatubo and that it won’t erupt laterally like Mount St. Helens did 38 years ago today.

Whew. That is a relief. But now you might be wondering why, exactly, those lava-splattering fissures on Kilauea’s flanks—and the boulder-hurling explosions at its summit—won’t turn into something more powerful. The biggest reason is that the magma (molten rock) feeding the eruption at Kilauea has very different chemistry than the magma feeding a more explosive volcano.

“If you have a magma that has a lot of silica in it, it’s really sticky and very thick, so it can explode when you have gas that’s trying to get out really rapidly,” says Erika Rader, a volcanologist at the University of Idaho.

Silica is a chemical compound that you see every day. It’s in rocks, sand, quartz, glass, cement, and many other manufactured and natural objects. It makes up an estimated 59 percent of the mass of our planet’s crust. It also has the potential to make volcanoes explosive.

If there’s a lot of silica present in magma, individual pieces will start bonding with each other, creating a thicker, stickier, and more viscous molten stew.

“Molecules of silica will link up into chains—they haven’t quite formed into crystals yet—but they make these strands inside of that magma. When you pull it apart, you have to break those strands, and that requires more energy—the more stands you have, the harder it is to break,” Rader says.

But what’s around to break those strands? This is where another piece of the eruption puzzle comes in. Magma isn’t just molten rock. There are also a lot of gases dissolved into the mix. And like the gases in an unopened bottle of soda, they want out. In silica-rich magma, those strands pose a problem. Pressure builds up during an eruption—like a shaken bottle of seltzer—until the explosive release of an eruption.

In a situation like Kilauea, where the magma doesn’t have many of those silica strands, the gas can wriggle out easily—escaping like lazy bubbles from a glass of ginger ale forgotten on a coffee table.

Hawaii’s magma has less silica in part because of its position over a hotspot in the thin oceanic crust that underlies the Pacific Ocean. Here, temperatures of the magma are very high, and it doesn’t have far to go to reach the surface.

“Hawaii is the textbook example of a hotspot where there is a huge amount of heat coming out from the lower parts of the earth. When you have something that is really really hot you also have magmas that have less of these silica chains in them,” Rader says. “Cooler temperatures mean that some minerals have crystallized and been removed from the magma, and the minerals that crystallize first are elements that are not silica. So silica gets concentrated as you progress to cooler and cooler temperatures.”

Even without a lot of silica, there can be explosive events at volcanoes like Kilauea, just like we saw this week. Kilauea’s present explosions are also caused by trapped gas and building pressure, but with slightly different mechanics. There, the gas isn’t just coming from inside the magma—it’s also coming from surrounding groundwater, which gets a chance to mingle with the magma when Kilauea’s lava lake drops below the water table. (Magma=below the surface, lava=above the surface). If a rockfall creates a blockade at the mouth of the lava lake, pressure can build, leading to an explosion.

Again, such an explosion is still puny by geologic standards. Kilauea periodically goes through explosive phases, usually when the magma underneath drops below the water table for long periods of time. Some of these previous explosions proved be deadly, killing people in the path of pyroclastic flows of ash and gas racing down hillsides, or those who happened to be too close to the summit when an eruption occurred. But the effects of these eruptions were local, not global. Current evidence of Kilauea’s largest explosion (sometime around 900 AD) shows that it sent 10 pound rocks 5 miles from the summit, and golf-ball sized rocks 11 miles away.

That’s a lot, and certainly a problem for people who live nearby. But it doesn’t make its impact known beyond the island, unlike some more explosive volcanic cousins. To put it in perspective, when Krakatoa erupted in 1883, people heard the Indonesian explosion as far away as Singapore, Australia, and Mauritius. The column of ash and gas reached 15 miles high. The resulting falling debris, swiftly-moving incandescent clouds of gas and ash, mudslides, and tsunami ended up killing at least 36,000 people. Ash fell at distances of 3,775 miles away, and aerosols injected high into the atmosphere by the eruption created a haze that altered sunsets around the globe. That’s absolutely not going to happen on Hawaii.

In the end, both kinds of eruptions are part of the process of this active Earth we live on. One is slower, hotter, and usually less noticeable, slowly pouring islands out onto the seafloor and landforms onto the surface. The other instantly demands attention, changing the surface in a sudden convulsion of the planet’s crust. And the incredible thing is, they’re happening all the time—from Hawaii, to Indonesia, to the now-quiet snow-capped peak where Mount St. Helens exploded 38 years ago.