How Some Tiny Plankton Can Literally Jump Out Of Water 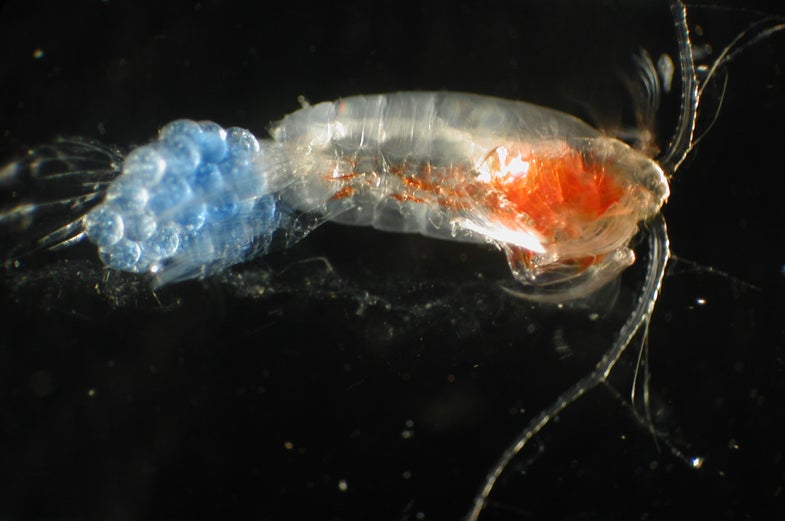 Plenty of animals leap out of the water: whales, dolphins, flying fish, plankton. Yes, that’s right, plankton. Those tiny microscopic creatures that are at the very bottom of the food chain do sometimes have the power to transcend their watery habitat, even if only for a brief moment. But some plankton can jump, and others can’t, a puzzle that has confronted scientists for years. Now, there might be an answer. Like a lot of things in nature, plankton’s ability to jump comes down to just two factors; speed and size.

In a paper published in the Journal of the Royal Society Interface, researchers looked at plankton that could jump out of the water in response to a threat or disturbance and those that couldn’t. Using a high-speed camera they watched how plankton leapt out of the water, and then repeated the motion by shooting tiny plankton-sized balls (less than 3 millimeters wide) towards the water’s surface from the bottom of a tank. They varied the size of the balls and the speed at which they were shot, and found that plankton need to be relatively large and fast in order to break the water-air barrier.

Why is it harder for plankton than other animals? The authors explain in the paper that while larger animals mostly just have to achieve a speed that overcomes the force of gravity in order to leap out of the water, plankton are so very small that the surface tension of the water is another barrier. Surface tension is a property of liquids like water, where the molecules are attracted to each other.

Usually water molecules are equally attracted to their neighbors, but at the top of a glass of water (or a pond, or any body of still water, for that matter), the water molecules right at the barrier have no neighbors on top of them to grab on to, so they cling to one another even more tightly. This forms almost a film at the top of a body of liquid, called surface tension, which animals can’t move through quite as easily as the rest of the water. While that isn’t a problem for a salmon, or a whale—which are much larger and stronger—it can be an issue for small creatures like plankton.

In their experiments, the researchers found that a plankton 2.4 millimeters in length would be able to escape the water if it were going fast enough (somewhere between 1.3 miles-per-hour and 1.7 miles-per-hour), but plankton smaller than that (especially those around 1 millimeter in size), or traveling slower, wouldn’t be able to escape the water’s grip.

The researchers write that they hope “even though the present work is motivated by plankton, the illustrated theoretical model is relevant across multiple disciplines, due to the fundamental interest in the particle–interface interaction and the corresponding potential engineering applications.” No word on what those engineering applications are, but we’re looking forward to finding out.