Who needs water when you have beer? 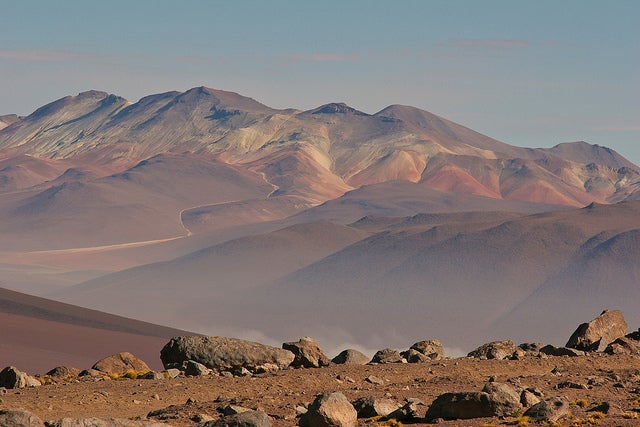 Chile’s Atacama Desert is one of the driest places on the planet; some parts haven’t seen rainfall for centuries. But the region is often shrouded in a dense fog locally called camanchaca, from which local flora harvest what little water they need to survive. Here, as in other places around the world, researchers have been testing nets that collect water from the fog in order to stop desertification and bring water to residents—and one tiny brewery has been reaping the benefits.

Since a particularly bad drought in the 1950s, now-retired physics professor Carlos Espinosa Arancibia has been testing nets that could help capture water in Chile’s driest regions, the BBC reports. This current iteration of the net has openings less than one millimeter across around which water droplets condense out of the fog. The drops accumulate and grow until they drip into a pipe at the base of the net, from which it flows into a container, so clean that it’s immediately ready for human use.

One of Espinosa’s test centers is near the town of Pena Blanca, home of the Atrapaneblina (fog catcher) brewery. The beer–a golden-amber Scottish ale with brown foam–is made only with the water collected from the fog nets. The brewery produces a meager 6,300 gallons of beer per year, but its owner says the water gives the beer a unique taste and quality.

But the brewers at Atrapaneblina aren’t the only ones that have been reaping the benefits of more water. By placing the nets at key points where the desert was expanding, Espinosa claims he has been able to slow the process of desertification, replenishing the native plants in about a half a square mile of land.

The netting is inexpensive–430 square feet of the stuff would cost $1,000 to $1,500–and has minimal effect on the local ecosystem. Espinosa plans to bring fog water to local families in the near future.

To see more photos of the Atrapaneblina brewery and surrounding region, check out the BBC story.