Findings could tell us how our ancestors learned to cook, too 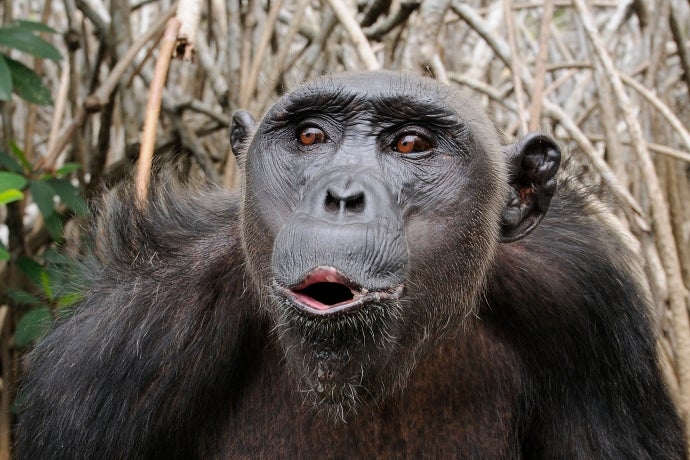 Even if you hate cooking, you have the cognitive ability to do so. You can plan ahead, buy the necessary ingredients, make sure food spends long enough in the pan, and restrain yourself before jamming it all in your mouth (that is, unless it’s cookie dough). The mental capacity to cook seemed to be unique to humans. But now, according to a study published today in Proceedings of The Royal Society B, chimpanzees can also learn to cook—and prefer cooked food to raw food.

Researchers have never been sure how early humans started cooking their food. Was it an additional benefit to being able to control fire, or a conscious effort to benefit from the higher caloric content of cooked foods? By analyzing the cooking capacities of our closest primate relatives, researchers could start to understand how humans started to cook in the first place.

Since chimps can’t broil, sauté, or flambé in the wild, researchers gave them a set of tasks to test the cognitive abilities that would be necessary for them to cook. They found that chimps prefer the taste of cooked food (which would give them the motivation to cook), are willing to wait longer for cooked foods, can refrain from eating raw foods in order for them to be cooked, understand the causal relationship of cooking (put raw food near flame then it’s better), and are able to save and transport food for it to later be cooked.

To simulate cooking, the researchers gave the chimps a device that appeared to work like an oven—a “chimpanzee microwave,” as one researcher called it—where they could place raw food and it would come out cooked. In reality, the bowl just had a false bottom where cooked food was stored. This is the first study to show that chimpanzees can acquire a skill like cooking on their own.

Watch this chimp put the raw food in the “cooking” device:

The chimps were capable of all of the cognitive capacities necessary for cooking, just as humans do. This evidence suggests that early humans may not have had the brainpower to start cooking intentionally. It’s not a certain conclusion, but our early human brains would have been poised and equipped to start cooking as soon as someone dropped a piece of food next to the fire and found out that it tasted pretty darn good.