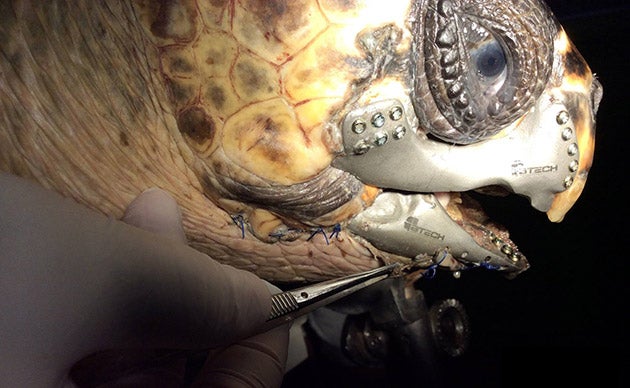 In an earlier era, colliding with a boat’s propeller could have been the end of a sea turtle’s life. This is not that grim dark era, so a sea turtle found with a broken jaw was rescued and then brought to Pamukkale University’s Sea Turtle Research, Rescue and Rehabilitation center in Denizli, Turkey. Thanks to a collaboration with Turkish company Btech Innovation, the turtle received a custom-designed, 3D-printed titanium jaw.

To make the jaw, the company scanned the turtle, and then converted those scans into 3D models. Then, they printed the jaw out of medical-grade titanium and mailed it to the rescue center, where surgeons attached the jaw to the turtle. The turtle is still in recovery–scientists have to make sure it doesn’t reject the prosthetic–but thanks to modern technological marvels and the efforts of rescuers, it should be free to return to the seas soon. When it does, Mario should watch out.

Watch a broadcast about it in Turkish below: