Growing Jet Fuel In The Desert

Alejandro Ríos is developing a sophisticated alternative to crude oil 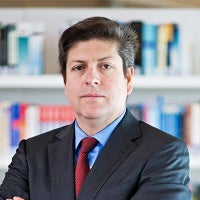 Commercial jets burn 71 billion gallons of fuel annually, most of it refined from crude oil. Biofuels promise a cleaner alternative, but they typically consume too many other resources, such as fresh water and arable land, or are simply not economically viable. Alejandro Ríos, director of sustainable bio-energy at Abu Dhabi’s Masdar Institute, believes he has found a way around both problems: halophytes, plants that grow in the desert, thrive on seawater, and produce oil-rich seeds.

With support from aviation heavyweights, including Boeing, Ríos has begun a nearly five-acre pilot project in Abu Dhabi. He will irrigate his first crop of halophytes with nutrient-rich recycled seawater from local fishponds. The plants should be ready for harvest in eight months. Then oil will be extracted and refined. Ríos has high hopes that the project, when scaled, up, will yield fuel at a price competitive with fossil fuels. “If we’re able to produce jet fuel using salt water on arid land,” says Ríos, “that’s a game changer.” Assuming all goes well, he hopes to enter the market within five years.