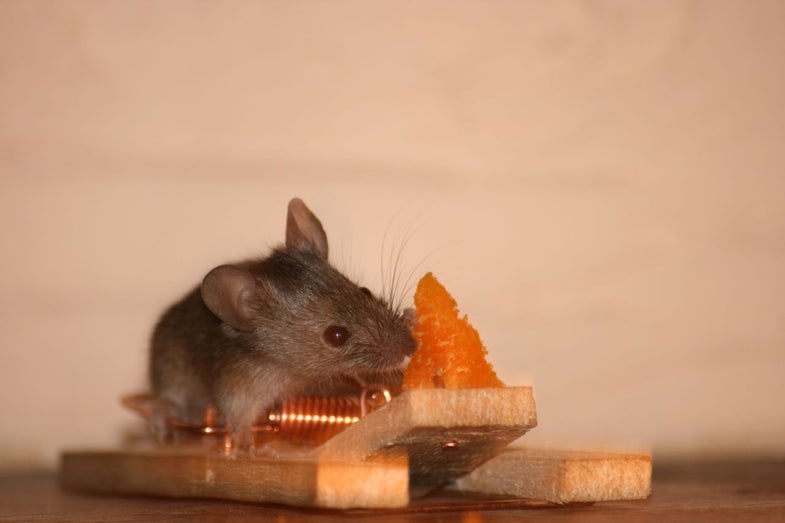 In many people’s minds, mice are cheese junkies, thanks, in no small part, to watching endless hours of Tom and Jerry cartoons. But in reality, mice are optimal foragers, which means they’ll eat whatever provides the most energy and takes the least time and effort to get, says Robert Corrigan, an urban rodentologist who works with the New York City Department of Health and Mental Hygiene. In general, a mouse prefers seeds, grains, or nuts over cheese; one cup of mixed nuts provides about 800 calories, while a cup of shredded Swiss only clocks in around 400.

That’s not to say mice are food snobs. As part of their opportunistic eating strategy, the rodents will try anything they can get their whiskers in. If seeds or nuts are hard to come by in the wild, mice will turn to insects or bird eggs. And if things get really desperate, even friends can start to look pretty tasty. It is not uncommon for mice to cannibalize.

In a human environment, like your home, mice are more likely to go for the easy-access pantry than the fridge’s well-protected dairy drawer. And, as a species that often falls prey to mouse traps, or larger creatures, the best way for a mouse to minimize its vulnerability is to eat quickly and get back to cover. This impulse drives mice toward the easiest pickings; if cheese is the only option, they’ll “eat it until doomsday” says Corrigan, but it wouldn’t necessarily be their first choice for nutritional content.

So how did rumors about the mouse-cheese love affair start flying? One theory is that back when people stored grains in jars and had meats salted and hanging high, the cheese, which has very few storage requirements, was the most accessible food in the house. Discovering nibble marks on their cheddar could have led people to believe it was a mouse’s cuisine of choice, says David Holmes, a psychologist at Manchester Metropolitan University.

This oversimplification is easier to grasp than complex ideas of attraction to higher carbohydrate content, so people held on to the belief. Over time, cartoon rodents such as Cinderella’s plump friend Gus and aspiring chef Ratatouille have perpetuated the myth through their apparent cheese compulsions.

Animals
Ask Us Anything
food