Just had COVID? Here’s when you should get a booster.

The exact timing often won't make a big difference, but consider these questions. 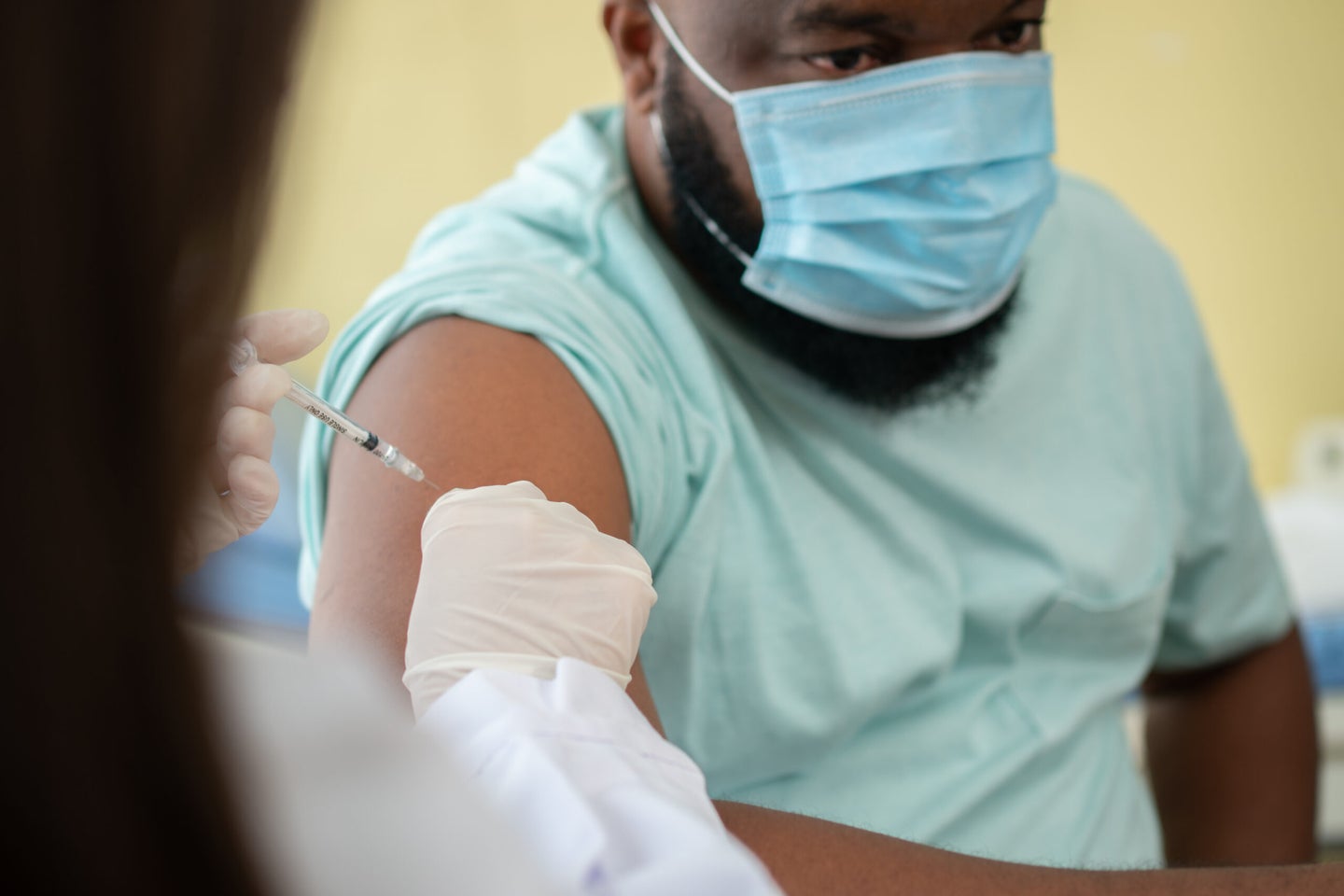 Wait a little bit, but don't stress about the details. Prot56/Deposit Photos
SHARE

By the end of April, more than half of people on Earth will have caught Omicron, according to a recent projection from the University of Washington’s Institute for Health Metrics and Evaluation (IHME). Although the IHME and other COVID modeling groups predict that the American surge will recede sometime in the next month, millions of Americans are probably still catching the virus every week. At the same time, only two-thirds of Americans have received two coronavirus vaccine doses, and just a quarter have had a booster shot. That will leave plenty of people with a question: When exactly should you get a shot after an infection?

Unfortunately, the answers are all over the map. The Centers for Disease Control and Prevention (CDC) allows you to get a shot as soon as your symptoms resolve, but the agency says that “current evidence about the optimal timing between SARS-CoV-2 infection and vaccination is insufficient to inform guidance.” Chicago’s public health commissioner recommended waiting 10 days after a positive test. The UK recommends 28 days. And at the far end of the spectrum is the World Health Organization, at 90 days.

Infectious disease and vaccine researchers who spoke to Popular Science didn’t agree with each other, either. Like so much during the pandemic, the answer depends on how you approach the question. In the end, as long as you finish your primary series of shots, you’re not going to get seriously ill again—the exact timing of another dose will only make a small difference. If your goal is to avoid a symptomatic illness, it might be worth getting a vaccine sooner after an infection. If you want to prioritize long-term immunity, there’s reason to think you should wait longer.

“I think the correct answer is: We don’t know,” says Dorry Segev, a transplant surgeon and infectious disease doctor at New York University’s School of Medicine. But there are ways to think through the decision.

Most researchers who spoke to Popular Science agreed that if you’re eligible, you should get another dose after an infection. It doesn’t matter which brand, but given the relative lack of other infection-control steps in many parts of the country, the shot will make you less likely to catch and spread COVID during future waves.

Do I need a shot at all?

An infection will confer protection against serious illness in most people. But if you haven’t had any shots, says William Schaffner, a professor of infectious diseases and disease prevention at Vanderbilt University Medical Center, “We don’t know how solid [your immunity is] to the different variants, and we don’t know what its duration is.”

It’s possible that at some point, the Food and Drug Administration (FDA) may authorize variant-specific boosters. But so far, research has found that the best way to train your body to respond to new strains is to start early: A study from October 2021 found that six months after vaccination, patients’ immune cells could rapidly change gears to produce antibodies against the Delta variant and the immune-evasive Beta variant—both entirely novel to the cells.

[Related: Which COVID-19 booster should I get?]

“Once you get a booster, antibody levels in your bloodstream are much higher than if you looked at people who recovered from COVID,” Schaffner says. “More is better for another reason: With more antibodies, the immune system creates a greater diversity of antibodies. And at least in the laboratory, it looks as though you gain greater protection against variants.”

What is the shot for?

One study published by the CDC in January showed that people who are boosted were about six percent less likely to die of the Delta variant than those who had two shots. (Unvaccinated people were 53 times more likely to die.) The study didn’t make the same comparison for Omicron.

Those gains are most apparent in people older than 50, and especially those older than 65. For younger, immunologically healthy people, “if you get a booster, that decreases your chance of having a mild illness for about three months,” says Paul Offit, a pediatric infectious disease and vaccine researcher at Children’s Hospital of Philadelphia.

Offit serves on the FDA advisory panel that recommends vaccine approvals, which in the fall of 2021 voted 13-2 to recommend third doses only to the elderly and others with high risk of severe COVID. (The FDA didn’t follow that recommendation, and the CDC ignored its own advisory panel by expanding boosters to most American adults.)

Anyone who has been both infected and received a vaccine will have extra-potent hybrid immunity, he says. Although additional shots reduce the chances of symptomatic illness, Offit points out they aren’t a tool for fully eliminating risk.

Still, three months of protection from mild illness could be an important benefit. If you can’t afford to take time off, or live with someone vulnerable and can’t fully isolate yourself, a booster—along with other precautions, like wearing a well-fitting N-95 mask, avoiding crowded places, or testing regularly—will reduce your chances of a worst-case scenario.

Okay, please tell me when to get a booster.

While you can receive a shot as soon as your symptoms resolve, according to the CDC, your immune response to a booster is likely to be stronger as time goes on. And until this fall, the CDC’s recommendation was to wait 90 days after an infection to be vaccinated. (The agency did not respond to questions on why it had changed that policy.)

“The CDC’s guidance is very murky and (in my opinion) does not comport with immunology,” writes Kirsten Lyke, a vaccine researcher at the University of Maryland’s School of Medicine, in an email to PopSci. “Usually, boosting is better the longer that you wait but I suggest a minimum of 6 weeks to my patients.”

There is one clear rule: If you received monoclonal antibodies to treat a COVID infection, you should wait 90 days before receiving a shot. The antibodies act a bit like training wheels for your immune system. You can’t learn to tackle the pathogen on your own until they wear off.

At FDA hearings this fall, agency advisors—including Offit—suggested that, based on the positive experience of other countries, a longer wait between doses would be more effective. While there have been no studies on the optimal timing of vaccination after a coronavirus infection, that rule of thumb is likely to hold true.

The other researchers who spoke to PopSci roughly agreed that somewhere between a few weeks and a few months made sense. There’s no maximum wait time, either: Schaffner notes that some patients wait years before receiving their third and final hepatitis B shot.

There are likely exceptions to that rule. People who are immunocompromised should get a third shot much sooner than others, and the same could be true for shots following infections, but that’s a decision best made with help from a physician.

Several experts mentioned that it could make sense to test your blood antibodies, via a commercial testing company like LabCorp, if you’re truly stuck. There are no hard-and-fast rules here, but it’s plausible that when your markers of immunity—particularly what’s called an IgG neutralization titer—have dropped, your immune system has wound down its high-gear response to the infection, and a shot could be more effective. Segev points to a November 2021 paper using data from the Moderna trial that found that people with the highest vaccine protection had IgG titers over 1,000.

You might want to speed along another shot if “for one reason or another, you wanted to get more protection as quickly as possible because you were going to have a lot more exposures, and might be at risk for a subsequent natural infection,” says Schaffner. But, he says, that’s a narrow circumstance, and won’t apply to most people.

And as Lyke points out: “You will get immunity from the COVID infection itself. You want that immune response to mature before you vaccinate.”