The new levees, floodwalls, and other upgrades were a multi-billion dollar investment. Here's why they were worth it. 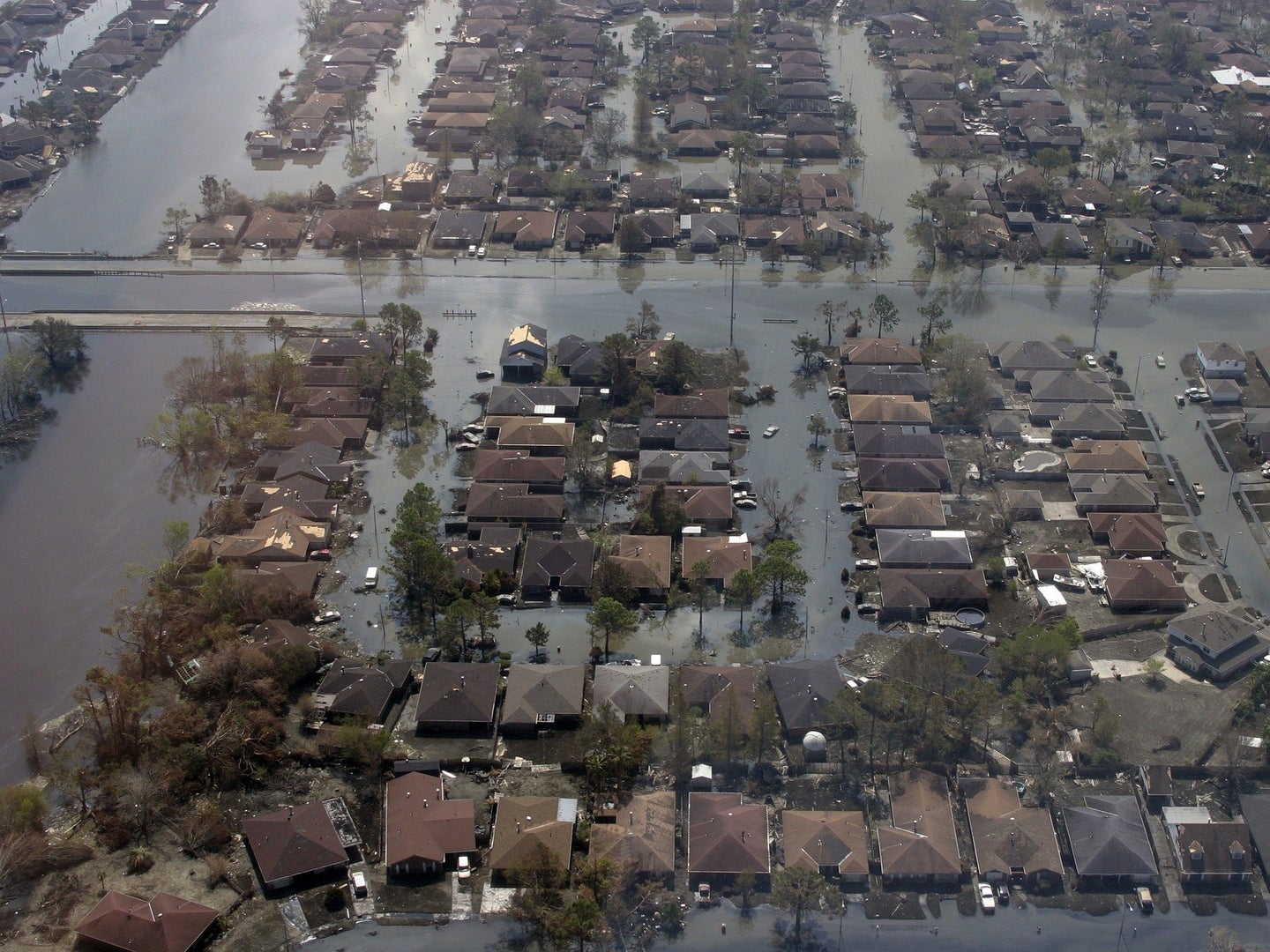 New Orleans after Hurricane Katrina in 2005. Since then, the state and federal government have spent billions of dollars shoring up the city’s flood defenses. Carol Colman via Pixabay
SHARE

On the anniversary of Hurricane Katrina, New Orleans stayed dry. In the 16 years between Katrina and Hurricane Ida, the state and federal government have spent billions of dollars shoring up the city’s flood defenses: keeping floodwaters out of the central city, fixing engineering problems, and restoring marshland. In the face of a category 4 storm, they survived.

That, say observers who have had a front row seat for the rebuilding of New Orleans, is a vindication of the investment. And it holds a lesson for the rest of the country, says Andy Horowitz, a historian at Tulane University, and the author of Katrina: A History, 1915-2015. “Investments in infrastructure will save people’s lives,” he says. “I think it is impossible that the United States will overspend on protection and adaptation to the climate crisis.” He adds: “There are many things we have to worry about in life. Wasting money on trying to protect our lives and our great cities is not one of them.”

Here’s exactly what this multi-billion dollar investment went to, how successful it was, and whether it will hold up during stronger, more intense storms.

The walls received a major overhaul

The biggest change since Katrina, says Ricky Boyett, a spokesperson for the Army Corps of Engineers’ New Orleans District, is that the system keeps water out of the heart of the city. When Katrina hit, New Orleans was protected by about 350 miles of levee and floodwall. Every canal and waterway into the city was connected to the Gulf, and so it had to contain the storm surge.

The focus, he says, was lining every mile of waterway. Levees are big, earthen walls that keep back water. In New Orleans, they rise dozens of feet above the city—higher on the river, lower on the lake and swamps. In some places, they’re augmented by floodwalls and gates, concrete structures that can open and shut with storms.

What’s often forgotten in the national imagination of Hurricane Katrina is that New Orleans’ levees weren’t overtopped, nor were they wiped out by an overwhelming surge. Instead they failed because of engineering miscalculations. Those interior canals were often where the flood defenses failed. Where they did, a wall of water surged into the city, killing people instantly, and tearing homes and neighborhoods apart.

“Post-Katrina, we said, the biggest challenges we face is when the water gets into the interior of the city,” says Boyett “To do that, you have to be able to close those waterways off.”

So, the Corps built massive gates and pump systems at the entrances of city canals. To the east of New Orleans, where a defunct shipping channel guides water straight into the city, there’s now a two-mile, 26-foot-high surge gate known as the “Great Wall.” It can seal up the canals when a storm rolls in.

Between those two changes, Boyett says, the outer perimeter of the flood defenses is down to 133 miles with the goal of “not letting the water into the city.”

Just as importantly, he says, “We built it to be overtopped. We knew that whatever we built it to [withstand], there would inevitably be a storm bigger.”

There are two key ways that a storm can beat levees: when the water surpasses the wall’s height or if there’s a break in the wall itself. If it’s overtopped, some water sloshes into the city, leading to heavy, but limited flooding. If there’s a breach, the levee gives way, and an endless torrent of water fills up the city, which is what happened during Katrina. In 2005, the levees breached at water levels lower than designed, leading to weeks of flooding. And overtopping can contribute to a breach, as water pouring over the top of an earth levee causes erosion.

The rebuilt levees are planted with grass, or armored with cement, in an effort to protect them when they are overtopped.

Sandy Rosenthal, the founder of levees.org, a citizen group that discovered the Corp’s failures in building the levees, for the most part agrees on the important changes. The armored, reinforced levees gave her peace of mind during Ida. But, she stresses, the original system should be remembered as an engineering mistake that cost the lives of 1500 people.

“It was a $100 billion dollar price tag to society 16 years ago,” Rosenthal says, on top of “the unspeakable human cost.”

“And a lot of society holds that against us, even though it was not our fault,” she adds. “We were blamed for living here. The bottom line is the American people are safer for the disaster that happened 16 years ago.”

As the federal government spent billions on the levee system, the state of Louisiana has invested in green infrastructure.

Since the 1930s, Louisiana’s coast has been disappearing. Storms, erosion, and thousands of miles of channel cut by oil and gas extractors have lacerated the marshland that once made up the bottom of the state’s boot. In satellite images, there’s almost no toe left.

That marshland once soaked up storm surge and slowed hurricane winds before they arrived in cities. Massive structures like the “Great Wall” are only necessary to repair the damage done to the marsh.

Louisiana has embarked on the largest, most ambitious coastal restoration plans in the country, with a $90 billion price tag over the next 50 years or so.

So far, that’s meant pouring sediment into disappearing marshland, restoring barrier islands with dredged sand, and “hardening” shorelines with rock and cement to stop them from retreating further.

The largest project, which would pour sediment and fresh water from the Mississippi River into wetlands south of the city, will cost somewhere in the neighborhood of $2 billion, and is projected to create 28 miles of land just south of New Orleans.

But those industrial-scale wetland restoration projects have been coupled with a rethink of how the city of New Orleans deals with water, says Darryl Malek-Wiley, a longtime Sierra Club organizer in the city.

The building code has been changed to require permeable surfaces that soak up water, rather than letting them pool as floods. “It’s about how we live with water, not how we dispose of water,” he says. “That’s a real change in mindset from, how do we pump it into the lake, to how do we slow it down, and reduce what we pump into the lake?”

How will these new systems handle storms stronger than Ida?

The plan for New Orleans’ post-Katrina levees was the “economy model,” says Horowitz—it’s not designed to keep out the strongest storms, or even a Katrina-level storm.

After Katrina, leaders in New Orleans wanted protection against the most catastrophic storms. Instead, the federal government paid for a lower threshold. Under it, New Orleans has roughly a 25 percent chance of getting hit by a bigger storm over a 30-year period.

Right now, says Boyett, the Corps is working to determine how Ida compared to previous storms. All their surge gauges broke, and so they’re measuring the high water mark by hand. But, he says, by the sheer fact that the levees weren’t overtopped, Ida wasn’t the strongest storm the city could have seen.

And although the levees were built to offer some protection against rising seas, the threats facing them will become even more intense. The marsh will continue to erode, and more frequent storms will be more common.

All the observers agreed that the lesson is clear: More money for flood protection will pay dividends.

“The thing about levees is, it’s not just Louisiana,” says the Sierra Club’s Malek-Wiley. It’s not even just coasts—cities in river floodplains across the country are defended by levees. “There hasn’t been a real discussion about that type of infrastructure maintenance. Nobody thinks about it until it breaks.”

The improvements to New Orleans levees cost just over $14 billion. “That’s probably paid for itself 10 times over on Sunday alone,” says Horowitz. “There’s no reason to expect that there won’t be several other storms in the immediate future, in which it pays for itself several times over. So the idea that $14 billion is expensive I think is ludicrous. People should laugh at that.”