Hydras can regrow their heads. Scientists want to know how they do it.

A new analysis reveals genetic underpinnings of how the aquatic animals regrow their heads after decapitation. 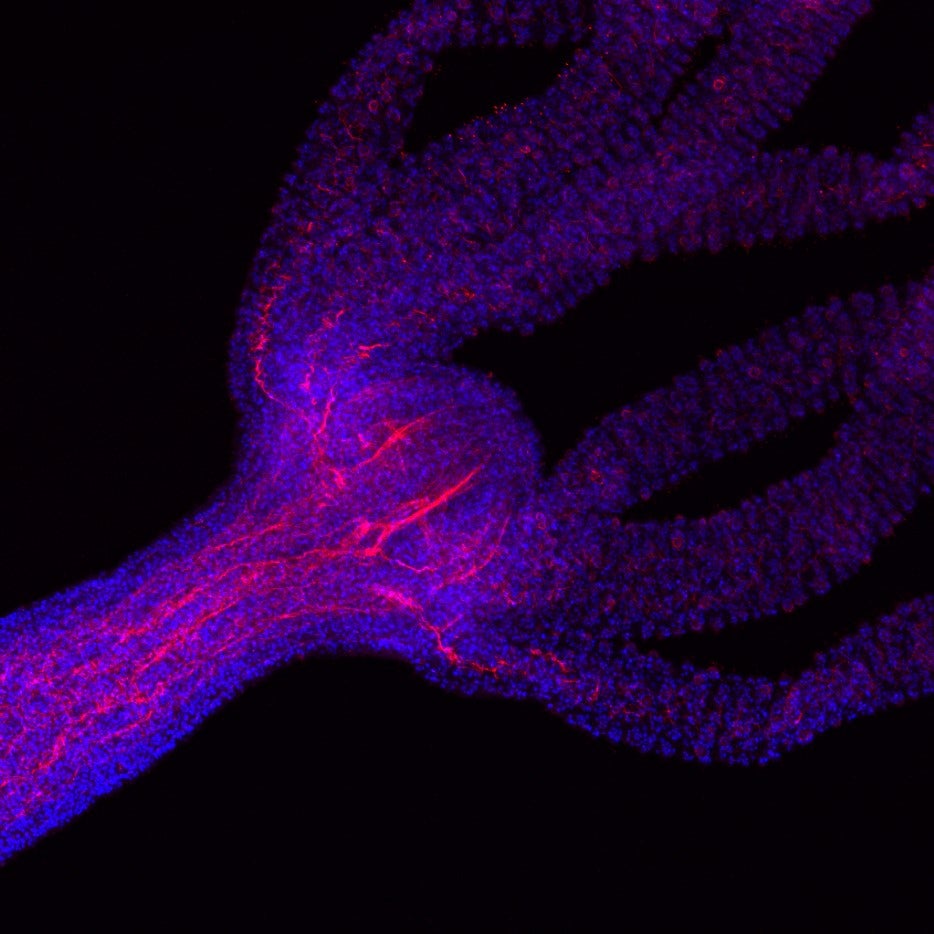 Hydra, along with some worms and other animals, take regeneration to the extreme. David Plachetzki
SHARE

For a group of small aquatic animals known as hydra, decapitation is more an inconvenience than anything else. Thanks to the creatures’ incredible regenerative abilities, it needn’t be fatal.

The processes that govern how hydra manage to regrow their heads have remained mysterious, however. Hoping to understand the genetic underpinnings of this feat, scientists have taken a close look at which genes are switched on and off during regeneration and how they’re controlled.

She and her colleagues found key differences in head growth during regeneration and budding, the form of asexual reproduction used by hydra and some other animals such as corals. The team also noted that some of the mechanisms involved in hydra regeneration are similar to those that control development in other animals. This could mean that these “developmental tools” have an ancient history within the animal kingdom, says Macias-Muñoz, who published the findings on December 8 in the journal Genome Biology and Evolution.

Hydra belong to a larger group of invertebrates called cnidarians, which also includes sea anemones, corals, and jellyfish. Their simple bodies have a tubelike shape with the mouthpart and tentacles at one end, and a “foot” that attaches to the surrounding rock or other solid surface at the other.

Some animals such as lizards and salamanders can regrow lost limbs. But hydra, along with some worms and other animals, take regeneration to the extreme. Near their mouthparts, hydra have a cluster of 50 to 300 cells called the head organizer; as its name implies, it directs the development of the head. If a hydra is beheaded, a new organizer can form and prompt the animal to regrow its head. Meanwhile, the head that was lopped off will sometimes regrow the lower portion of its body.

Scientists have also successfully grafted hydra heads onto the decapitated bodies of other hydra. And if a hydra is torn into small clumps of cells, those clumps that include head organizer cells will regrow a full body, Macias-Muñoz says.

She and her team investigated whether hydra follow similar instructions to build their heads during regeneration and budding (in which the animal grows a little bud that eventually detaches to form an entirely new hydra). They analyzed tissue samples taken from hydra undergoing both processes, and identified 298 genes that were expressed differently during head regeneration and budding. These included genes previously linked to head organizer formation in hydra, as well as genes involved in the regeneration process in other animals.

[Related: These jellyfish seem to cheat death. What’s their secret?]

“Regeneration and budding, even though you get the same result, take different trajectories,” Macias-Muñoz says.

She and her colleagues also examined the mechanisms that control whether the instructions in these genes are carried out during regeneration. They homed in on the animals’ chromatin, tightly-packed genetic material that consists of DNA and proteins. When a stretch of chromatin is “closed,” proteins called histones keep it wrapped up so the DNA within cannot be read; when chromatin is “open,” other proteins can bind to and transcribe the DNA.

“Some areas of the chromatin are open in certain times of regeneration, and in other times they’re closed,” Macias-Muñoz says. “So it’s not only that genes are being turned on and off, it’s also that this changing of the open or closed chromatin is helping regulate the expression of these important genes for regeneration.”

The researchers also identified regions within the chromatin that are known to bind proteins that play important roles in development across different animal species. This suggests that some of the genetic machinery underlying regeneration evolved before the cnidarians split from the ancestors of more “complex” animals such as humans, Macias-Muñoz says.

The findings raise an intriguing question, she says. Does tissue regeneration work very similarly in hydra and other animals? Or are animals such as lizards and salamanders “rewiring” developmental genes in unique and different ways to achieve a similar effect as hydra?

In the future, Macias-Muñoz will explore how the genes and control processes she and her team identified interact. “The next step would be to actually functionally test them and verify that they are doing something in regeneration,” she says.

Investigating how regeneration works in simple organisms like hydra, and how similar it is to processes in other animals, could potentially lead to insights about how development goes awry in humans.

“Studying hydra just gives us a fundamental look at what cells can do and what the mechanisms are at the gene level,” Macias-Muñoz says. “If we can figure out how to disrupt them or fix the disruption in other organisms, then maybe we could start to think about how those disruptions that happen and cause disease can be…treated differently.”