With thousands missing and displaced after Dorian, the Bahamas may soon get hit by a tropical storm

Many small villages are still waiting for aid. 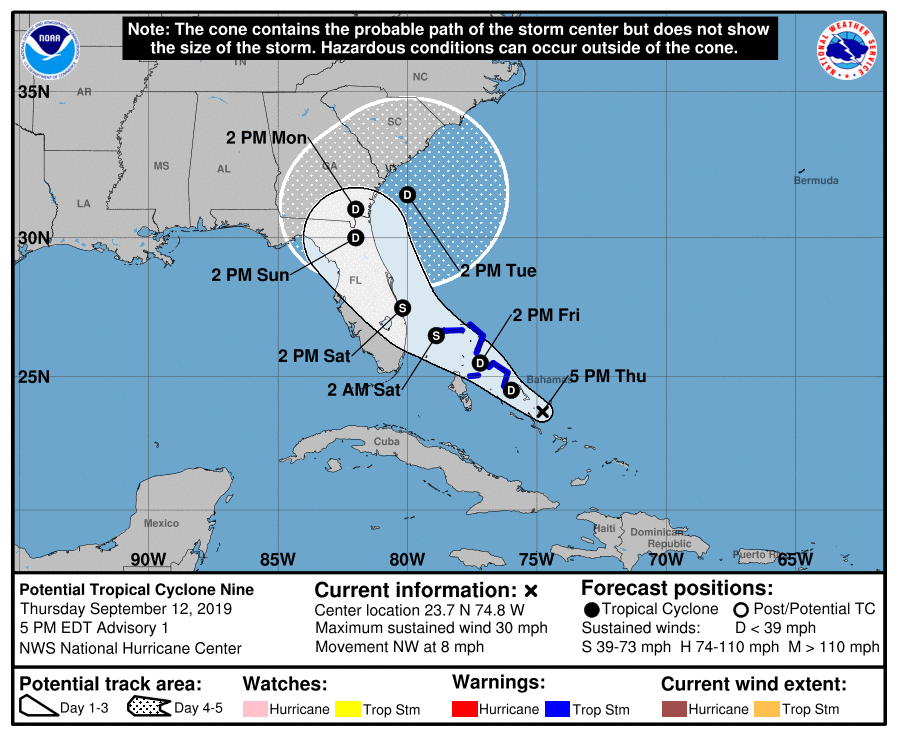 Forecasters at the National Hurricane Center (NHC) issued a Tropical Storm warning for residents of the Bahamas and the southeastern US on Thursday evening. Within the next 36 hours, this disturbance is expected to escalate and bring tropical-storm force winds to the northeastern Bahamas and the east coast of Florida. Heavy winds and rainfall are expected regardless of further intensification.

We’re currently at the peak of hurricane season. Tropical Storm Humberto would be the 8th named storm of the year. For now, it’s referred to as “Potential Tropical Cyclone 9” or PTC9. According to the NHC, the incoming storm’s path will cut through the northwestern archipelago of the Bahamas, an area completely devastated by Dorian just two weeks ago. While significant storm surge isn’t expected in the area, dangerous wind and heavy rain are expected by Friday.

Recovery efforts on these northern Bahamian islands have only just begun, and many small villages have not yet received aid, according to the Associated Press. Dorian’s 180 mph sustained winds caused an estimated $7 billion of damage. The storm killed dozens, and search and rescue teams are still looking for approximately 1,300 missing people. Officials expect the death toll to rise.

Almost 70,000 people were displaced by the hurricane, and are now seeking refuge in overcrowded shelters. Recovery supplies are still being shipped from Florida—a difficult and slow-moving operation even when the weather is favorable.

Residents of the east coast of Florida are being urged to pay attention to forecasts during the next few days. Potential trajectories are difficult to predict while a storm system is in such early stages of development, so while there’s no reason to panic or over-prepare, it’s never a bad idea to read up on how to prep for a hurricane.