These footprints could push back human history in the Americas

But knowing for sure isn't easy. 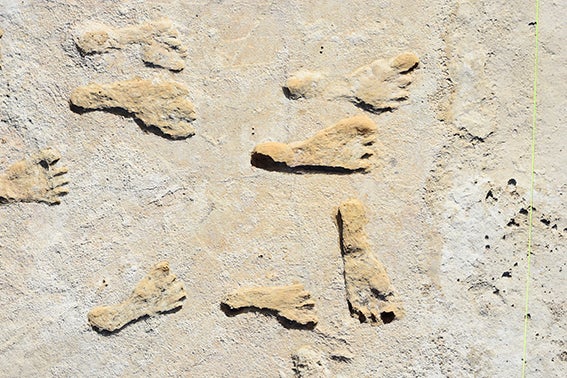 A set of footprints buried in the dunes of New Mexico’s White Sands National Park has landed in the middle of an ongoing reevaluation of the human history of the Americas.

The prints were left over thousands of years by humans who walked among giant sloths, camels, and mammoths on the grassy shores of a lake 23,000 years ago, as determined by radiocarbon dating of grass seeds found around the footprints.

That’s in stark contrast to the conventional hypothesis in archaeology, which holds that the first Americans crossed over between 16,000 and 12,000 years ago, when the glaciers still covered North America, and Siberia and interior Alaska were part of the same grassy subcontinent called Beringia.

But the footprints aren’t the first find to contradict that hypothesis. In 2020, a team found what they believe to be 30,000-year-old stone tools in a cave in central Mexico, followed shortly by another find in Mexico that may be more than 20,000 years old. They haven’t reshaped consensus within the field, because of questions over either the artifacts themselves or the dating used on the site.

Yet even archaeologists who aren’t convinced of older habitation agree that these footprints could cause them to rethink their views. “White Sands is clearly different as there are no artifacts to debate,” says Jesse Tune, an archaeologist at Fort Lewis College. “It’s hard to imagine more conclusive evidence for human activity than the literal [footprint] of someone standing on the shoreline of a lake ~23,000 years ago.”

It’s hard to find an archaeological site that isn’t up for some interpretation. “If folks are walking on that lake bed for 2,000 years, there should also be a bunch of archaeological sites associated with them that are nearby,” says Jessi Halligan, an archaeologist who studies the early habitation of the Americas at Florida State University. “Hopefully a few were preserved and are dateable to tell us more. Having some kids and teenagers trekking around in the mud is exciting, but as archaeologists, we always want to know more of the story.”

If the footprints do tip the scales towards an older migration, that could lead to a wider reevaluation of other pre-glacial artifacts. And that wouldn’t be the first time in recent decades that the archaeological consensus around the settling of the Americas has changed. Until the 2000s, there was still open debate over whether a group known as the Clovis people were the first inhabitants of the Americas. More recent genetic and archaeological evidence, however, has made it clear that other peoples had arrived earlier.

[Related: Early humans hooked up with other species a whole bunch]

“There are many sites that have really good dating and really good reports that are much older,” says Paulette Steeves, an archaeologist at Algoma University who studies Indigenous history, and author of The Indigenous Paleolithic of the Western Hemisphere. She’s compiled hundreds of finds that she finds credible that date back before 16,000 years.

Other archaeologists argue that these older sites contain less clear-cut evidence than the newer ones, making them less compelling against a widely held theory.

Once a hypothesis is established, it takes an extra lift to overturn it. “Archaeology is a careful balance of skepticism and open-mindedness, and I’m cautious to get too excited about the White Sands prints until we have more information,” says Tune.

Tune’s previous research on other possible pre-glacial sites, which might overturn the conventional hypothesis, has turned up blank: in 2018, he investigated three older sites and found that in each case, what had appeared to be stone or bone tools were either formed naturally, or couldn’t be definitively connected to the ancient layers.

But Steeves approaches the existing ancient sites differently. There’s a long history of what she describes as “violent criticism against archaeologists discussing older sites.” Steeves is Cree-Metis, and says that tendency is rooted in archaeology’s use as a tool to discount Indigenous claims to North America.

To her, the existing finds tell a consistent story of human habitation in the Americas that goes back hundreds of thousands of years. “There’s a word in the Cree language that means ‘when the glaciers went home,’ or ‘when the ice went home,’” she says. “People have those words in their Indigenous language because they were here before, right?”

She argues those non-physical pieces of evidence are important for contextualizing older archaeological sites. “Good science looks at every form of evidence available to highlight what you’re looking to discuss.”

“I always like to remind people to think critically,” says Steeves. “[Human] history has changed so much over the last 100 years, everywhere in the world. We’re always doing more excavations, we’re always finding out more.”