Horned dinosaurs may have crossed an ancient land bridge. 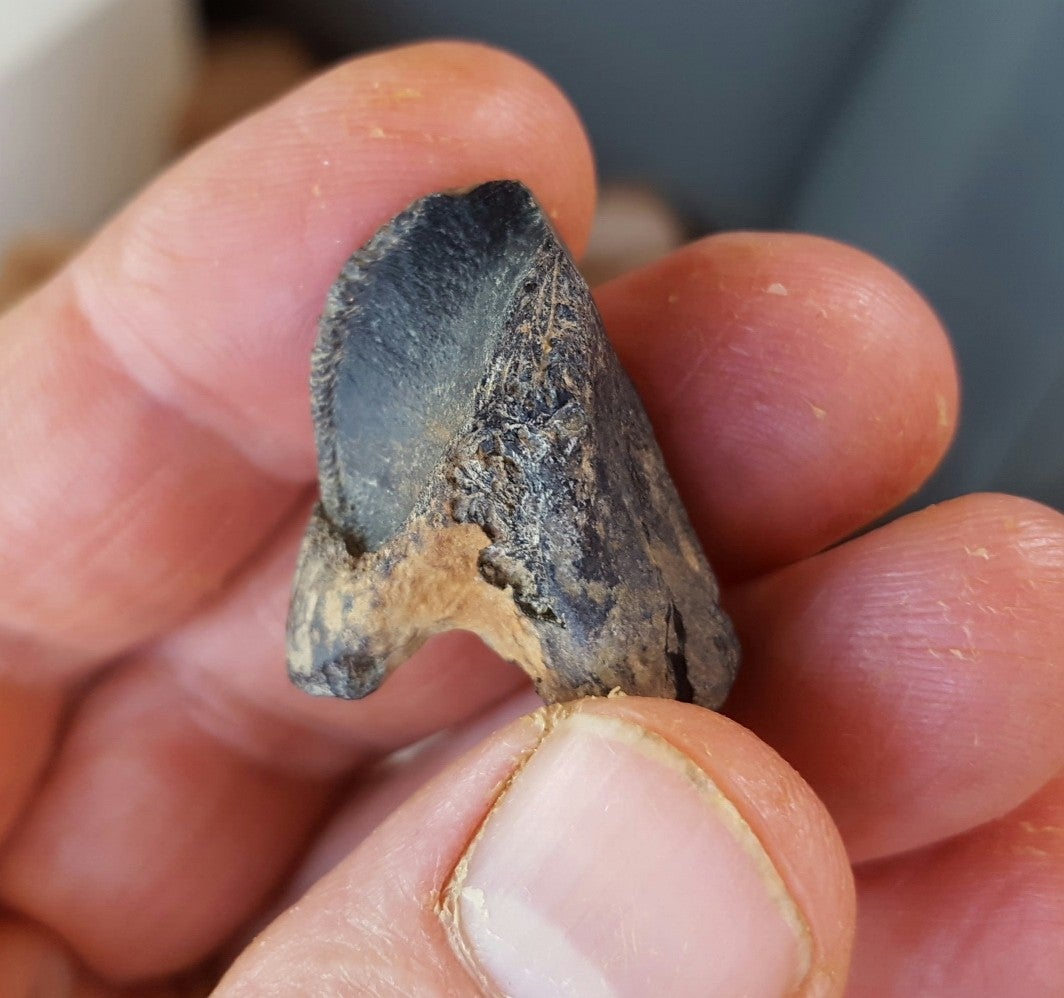 George Phillips was not expecting to find any dinosaurs in the Northeastern Mississippi stream. But as he hunted for fossilized crabs and mollusks, he came across a strange specimen—a ridged object about the size of a quarter.

As the Paleontology Curator at the Mississippi Museum of Natural Science, Phillips knew he held a dinosaur tooth, but he wasn’t sure what kind. Naturally, he turned to Facebook. News of the discovery swiftly travelled through a network of paleontologists before coming to the attention of Andrew Farke, a paleontologist at the Raymond M. Alf Museum of Paleontology.

Farke recognized the distinct shape, with a split root. Only about an hour and a half had passed since Phillips made his initial post, and Farke already had a tentative ID: this tooth belonged to a ceratopsid, a horned dinosaur like the triceratops.

On Tuesday, Farke and Phillips published their formal identification of the tooth in a paper in PeerJ. Though the once large dinosaur is only represented by a single tiny tooth, the fossil is momentous because of where it was found.

“There has never been a triceratops-like dinosaur found in eastern North America,” Phillips says. Previously, horned dinosaurs had only been found in the rich and exposed fossil beds of western North America, though some early relatives were also found in Asia.

When dinosaurs like Triceratops roamed the Earth about 68 million years ago, North America was bisected by a huge inland sea. This new fossil lends weight to a previously proposed idea that there might have been some kind of land bridge across this shallow sea millions of years ago. A land connection would have allowed Triceratops and its cousins to head east, but the exact location of the land bridge formed by retreating seas remains unknown. Two fragments of older species from the same broader family as horned dinosaurs were previously found in eastern North America, but these are believed to pre-date the formation of the sea, which stretched from the Arctic to the Gulf of Mexico, and those fossils are not thought to be evolutionarily related to the fossil tooth find.

Wherever it was, the horned dinosaurs would have only had a geological instant (1.5 million years) to cross the bridge from their western stronghold into the east before an asteroid slammed into the Earth 66 million years ago, ending the age of dinosaurs.

“A land bridge before the end of the Cretaceous could have allowed horned dinosaurs to migrate or disperse through Texas or Arkansas, right before they were all killed in the calamity,” Phillips says.

The researchers think that when this horned dinosaur (it might have been a triceratops, but there’s not enough information to be sure) died, its body fell into a river where currents swept it downstream. It settled onto the seafloor with the discarded remains of other animals—the basis for a fossil-rich layer of rock now known as the Owl Creek Formation.

Millions of years passed, with other sediments coating the ancient seafloor. Soils and plants grew on top of the land, and eventually, a stream cut down through the roots and dirt and rocks and dislodged a tooth, carrying it downstream to Phillips.

The last leg of its journey couldn’t have been too long. The tooth is relatively fragile, and too much tumbling about on the stream bed would have broken off some of the distinctive features that made it so identifiable.

Phillips has pinned down the general area in the Owl Creek Formation where the tooth might have come from, but the creek where he works is overgrow with vegetation and has been so swollen with rain that he hasn’t been able to go and look for other parts of the dinosaur that might remain. He hopes to go out again this summer to take another look, if the water level falls low enough to uncover parts of the stream bed.