This is the fourth hazardous and uncontrolled re-entry from China's space administration. 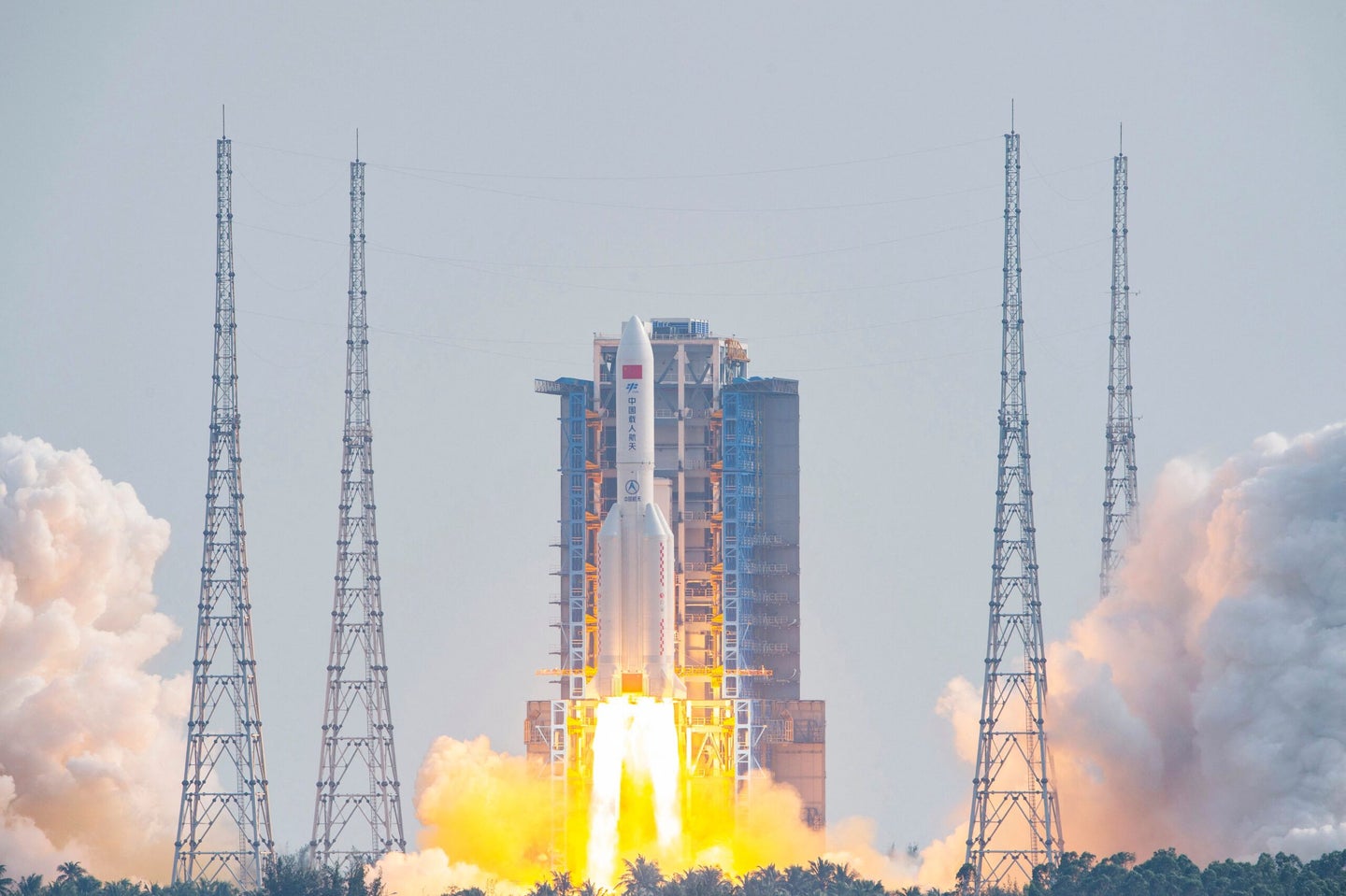 A Long March 5B rocket, carrying the final module of Tiangong space station, lifts off from the Wenchang Space Launch Centre in southern China's Hainan Province On October 31, 2022. China OUT (Photo by CNS / AFP) / China OUT (Photo by -/CNS/AFP via Getty Images)
SHARE

Kicking off the weekend in bold fashion, the uncontrolled remnants of a rocket booster from the China National Space Administration plunged into the Pacific Ocean this morning. This specific rocket booster was used during a mission on October 31 that brought another piece of Tiangong, China’s new space station, into orbit.

According to the US Space Command, the charred debris reentered the Earth’s atmosphere over the south-central Pacific Ocean just after 6 a.m. EDT. Space Command is part of the Department of Defense.

[Related: The chance of being hit by China’s falling rocket booster is very low.]

This was the fourth uncontrolled reentry for China’s Long March 5B rocket since its debut in 2020. The vehicle was designed without the necessary equipment to steer itself to a safe landing, which has generated controversy and been criticized by space policy experts.

“I want to point out that the lower the acceptable risk is, the more expensive it is to design to that risk. But it’s something that must be done,” said Lael Woods, a space traffic management expert with the Space Safety Institute, during a news conference hosted by The Aerospace Corporation, a federally funded research center. “Imagine the roads today are completely empty. There’s really not much need to have rules or stoplights and so on. But we absolutely—with our population that we have driving around on the roads today—we must have stoplights and traffic signs and rules.”

The rocket booster is 108 feet end to end and weighs 23 tons, or roughly three times more than the average elephant. The majority of the hardware inside burned up during re-entry. While the remaining rocket debris from all four incidents haven’t posed any threats to people or major population centers, debris has been found on land. In August, debris following on of the booster’s crash landings was found in the Malaysia and Indonesia.

Pieces of a Long March 5B rocket are not the only human-made space junk to ever fall to the Earth from space. Chunks of spacecraft from the United States have also fallen to the Earth, with a small piece of a SpaceX vehicle landing on a sheep farm in Australia this summer.

Ted Muelhaupt, one of The Aerospace Corporation’s consultants, and other experts stress that these incidents differ from China’s current use of the Long March 5B rocket. “The thing I want to point out about this is that we, the world, don’t deliberately launch things this big intending them to fall wherever,” he told The New York Times. “We haven’t done that for 50 years.”

Most of today’s rockets are built to ensure that the boosters can be safely discarded, with NASA taking multiple steps to minimize the amount of large, risky space debris.

China’s Ministry of Foreign Affairs (MOFA) spokesperson Zhao Lijian referred questions regarding the safety issues to the department in charge of the rocket booster, according to CNN. “As a matter of principle, I would like to emphasize that China has always carried out activities for the peaceful use of outer space in accordance with international law and international practice, and it is internationally accepted practice for the upper stages of rockets to re-enter the atmosphere,” Zhao said. “The Chinese authorities have been closely monitoring the relevant rocket wreckage orbital parameters. We will release information to the international community in an open and transparent manner and in a timely manner.”