In a surprise twist, the evolution of human bipedalism might have nothing to do with learning to walk on land. 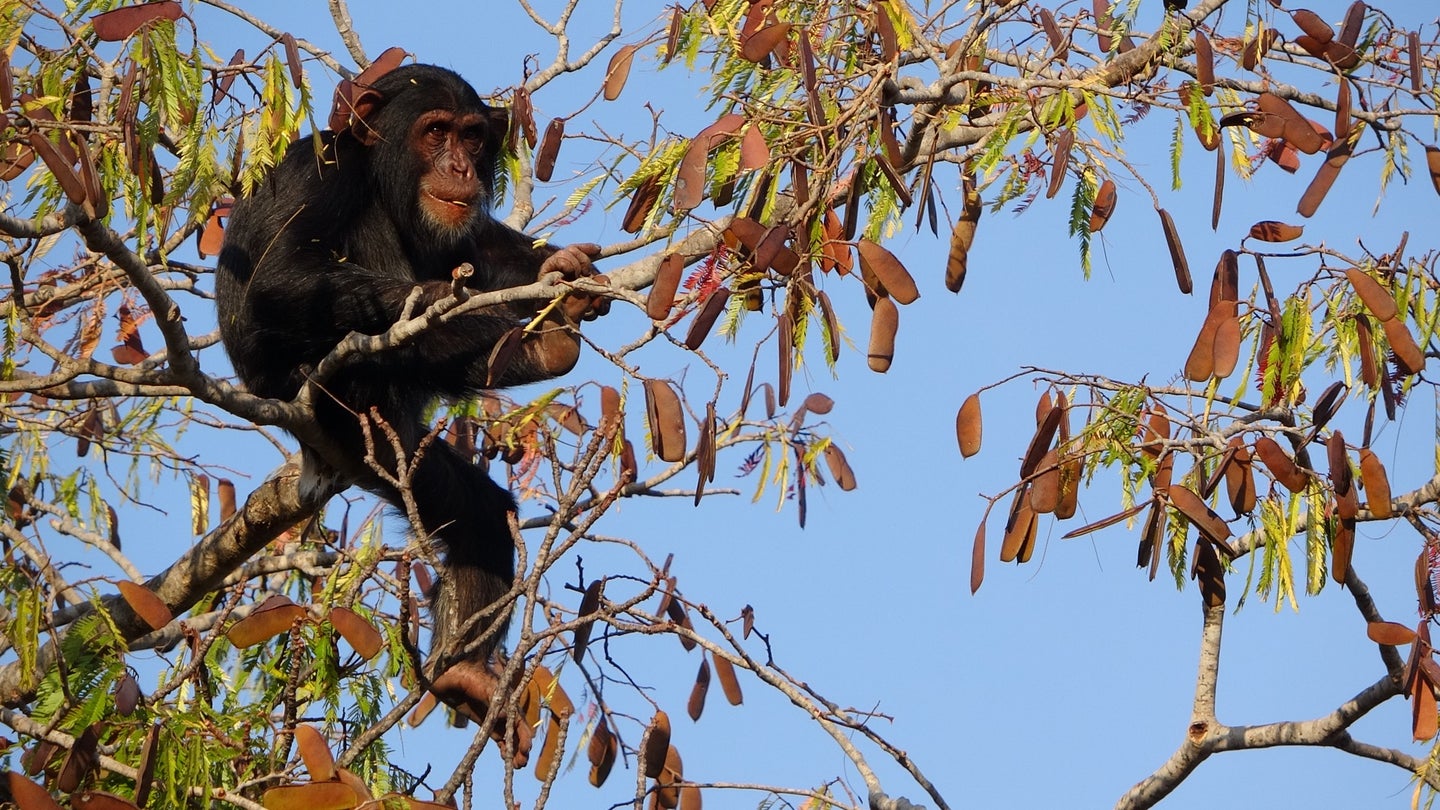 Despite their open and dry habitat, chimpanzees at Issa Valley remained highly arboreal and did not walk on the ground, findings which suggest that early ancestors might have evolved upright walking in trees. Rhianna C. Drummond-Clarke
SHARE

Walking on the moon is hailed as one of the greatest human achievements, but if you talk to any biological anthropologist, they’d probably say it’s the ability to walk upright on two legs in the first place. But the exact driving force that shifted locomotor behavior in our early human ancestors has largely remained a mystery. A new study published today in Science Advances makes the case that our ancestors transitioned to two-footed movement to better forage for food on tree branches. The research findings could potentially revise a long-standing theory of human bipedalism.

“Bipedalism is a defining feature of the human lineage and is the first thing to separate our fossil ancestors from other apes. Understanding why it evolved is thus key to understanding what made us human,” says Rhianna Drummond-Clarke, the study’s lead author and a biological anthropology Ph.D. student at the University of Kent in the United Kingdom.

If something jeopardized a basic need—food, water, air, and shelter—the evolutionary pressure to survive would have forced our early ancestors to adapt, the authors explain. The prevailing explanation supported by anthropologists is the “savanna hypothesis,” in which our ancestors began walking on two feet in response to changing environments. About 10 to 2.5 million years ago, tropical forests began shifting into dry and open savannas. Losing trees restricted the number of food options available, pushing human ancestors to move from foraging in trees to gathering down on the ground. This habitat transition is theorized to have been the driving force behind bipedalism.

However, some anthropologists have been skeptical of this explanation. A dwindling forest likely influenced but did not necessarily drive us toward two-legged walking, explains Alexander Piel, a biological anthropologist at the University College London and senior study author.

One reason there hasn’t been a clear-cut answer is that there are limited fossil records of our ancestors during the timeframe that human bipedalism is thought to have emerged. What’s more, the evidence that does exist, doesn’t seem to align with the savanna hypothesis. For instance, past research reconstructing ancient habitats during that time period has suggested that fossils are not in open grasslands but found in wooded areas. What’s more, the hominin fossils that are available show signs of ape-like forelimbs that would have helped swing and climb trees. That’s why Piel leans towards an “arboreal hypothesis,” where humans evolved to walk upright as a way of better foraging for food in the trees.

For the current study, the authors spent 15 months studying the behavior of 13 chimpanzees in the savannas of Issa, Tanzania. The team chose the Issa community because it’s a closely related ape that lives in a habitat resembling the one from a million years ago, Piel says. “What better place to investigate some of the key features—and the pressures on their evolution—that define our own species?”

The Issa chimpanzees are a primate species that spend about half of their life in trees, with the rest of the time on the ground. The study authors wanted to test whether living in a savanna increased their time on land compared to living in a forested habitat. Results showed that Issa chimpanzees spent the same time in trees regardless of whether they were in a forest or savanna setting. Additionally, locomotion data of other chimpanzee groups from past research revealed that the Issa chimpanzees spent more time in the trees than those that primarily live in forested habitats. In fact, their behavior most closely resembled Kibale chimpanzees which reside in forests.

When it comes to walking upright, the researchers noticed something interesting in the chimps. Issa chimpanzees were seen walking with two feet when up on the trees more frequently than on the ground. Bipedal movement often happened when searching for food in the forest. The results suggest that bipedalism may have emerged as a way to spend more time thoroughly searching for food in trees that were still available in the savanna.

Scott Williams, an evolutionary morphologist and paleoanthropologist at New York University who was not affiliated with the study, says this research is a “fantastic” contribution of locomotion data. However, he maintains that bipedalism primarily evolved because of savannas. He says the data showing savanna Issa chimps engaging in bipedal locomotion 4 to 25 times more than those in forests could actually be interpreted differently. “To me, this suggests almost the opposite of what the authors interpret—that savanna habitats selected for bipedal locomotion in early hominins.” Alternatively, Williams says chimps may have spent more time up in the trees because searching for food in higher locations may have been safer and made them less exposed to predators than foraging on the ground in an open savanna environment.

Some anthropologists, on the other hand, are open to the idea that bipedalism arose from something more than changing landscapes. Alyssa Crittenden, an anthropology professor at the University of Nevada, Las Vegas, says the study provides strong evidence towards the arboreal hypothesis, especially because of where the research took place. “While savanna ecologies are often centered in conversations on bipedalism, rarely do we have the opportunity to learn from chimpanzees living in such habitats,” she wrote in an email to PopSci. “This important study provides support for the hypothesis that hominin bipedalism likely evolved within an arboreal context and persisted long after hominids began living in and utilizing more open landscapes with less vegetation.”

[Related: Our long childhoods could be linked to food-gathering skills]

Despite the unique location that closely resembles the prehistoric landscape, Williams points out that one flaw to the arboreal hypothesis is that it does not explain how non-tree dwellers—think of kangaroos, hopping mice, and even cockroaches—also evolved to have bipedal movements as well.

“The traits we identify in hominins like Ardipithecus, Australopithecus, and Homo are clearly related to terrestrial, not arboreal, bipedalism,” Williams says. “Although many species seem to have retained [other] adaptations to arboreality, which is a useful thing when food is in the trees and predators are on the ground.”

The next step the authors are taking in their research is studying the resources available to Issa chimpanzees. Doing so will help to answer how our ancestors spent so much time in trees, given the sparse supply in savannas.