The land-dwelling ‘hell heron’ was a 30-foot aquatic assassin

The towering terrors were discovered on the dino-rich Isle of Wight. 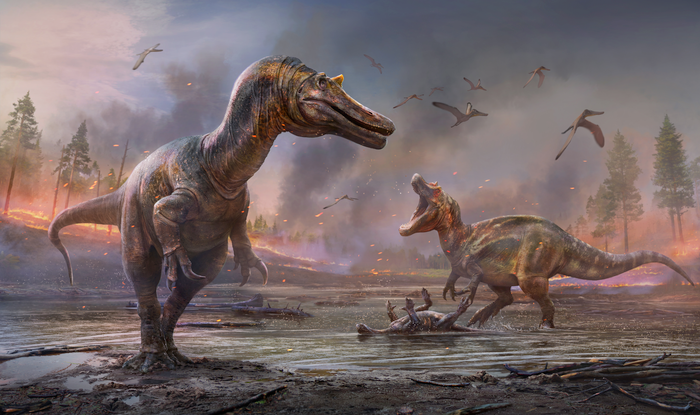 What do you think something called a hell heron might look like? Herons living today are necky, leggy birds with needle-sharp beaks. You might imagine an infernal version of this creature could also have horns or breathe fire. But in truth, it was a dinosaur with crocodile teeth. At least that’s what scientists have determined after a recent discovery of fossilized remains on the British Isle of Wight.

The hell heron is actually one of two new dinosaur species found, both from the family Spinosauridae, making these creatures spinosaurids, or spined dinosaurs. The new findings were published Wednesday in the journal Scientific Reports.

“Spinosaurs are cool,” says Neil Gostling, an evolutionary biologist at the University of Southampton who oversaw the fossil analysis. “I don’t normally use terms like ‘cool’ because I’m not cool enough to use terms like ‘cool.’” If a person who typically avoids using “cool” describes a dinosaur that way, this dinosaur must be pretty rad.

One thing that makes them so wicked awesome is that these specific Baryonyx were Frankenstein-esque terrestrial theropods, with nearly 30-foot-long bodies similar to a T. rex, but 3-foot-long heads more like crocodiles. Their narrow snouts and sharp, curved teeth could’ve been a dead ringer for the domes of the more familiar Australian terrors, though the two species are not directly related.

While these spinosaurs lived on land, they were unusual in that they were probably aquatic hunters who skulked for fish in rivers. That’s where the “heron” part comes from: Scientists believe they would strike for fish much in the way that modern herons hunt.

The hell heron has been specified as Ceratosuchops inferodios, which translates to “horned crocodile-faced hell heron.” The other is called Riparovenator milnerae, which means “Milner’s riverbank hunter,” in honor of the late British paleontologist Angela Milner.

Neither Gostling nor his team found the fossils; instead, they were discovered and donated by two fossil collectors, Brian Foster and Jeremy Lockwood, who donated their loot to the Dinosaur Isle museum. According to Gostling, the Isle of Wight is the best place in Europe to find dinosaur fossils, and one of the top ten places in the world, partially because the isle is eroding.

As for the new fossils themselves, Gostling and his team were working with two early Cretaceous-era finds from about 125 million years ago. One is a part of the snout at the front of the face, and the other is part of the skull case. They’ve got 50 other parts of the jaw to work with, so they’ve been able to recreate approximately what one of these two dinosaurs looked like.

Gostling says that while these dinosaurs are similar, he’s uncertain they lived at the same time;  they could have been separated by a million years, in fact.

While these finds might not overturn any one aspect of paleobiology, Gostling says that at the very least more experts have their eye on spinosaurids because of them. This fossil analysis also yields a migratory map.

“We can see from our analysis is that spinosaurs originate in Europe, and then migrate into South America, into Asia and, into Africa,” says Gostling. “That’s the really exciting thing we’ve got, the answers to geography questions as well as trying to address the ecology in terms of the diversity of animals. “

Correction 10/5/2021: This article previously misidentified the hell heron as being from the genus Baryonyx. It is a Baryonchine spinosaur, but not of that genus.