Will cracking my knuckles give me arthritis?

The splintering sound makes the habit seem far worse than it is. 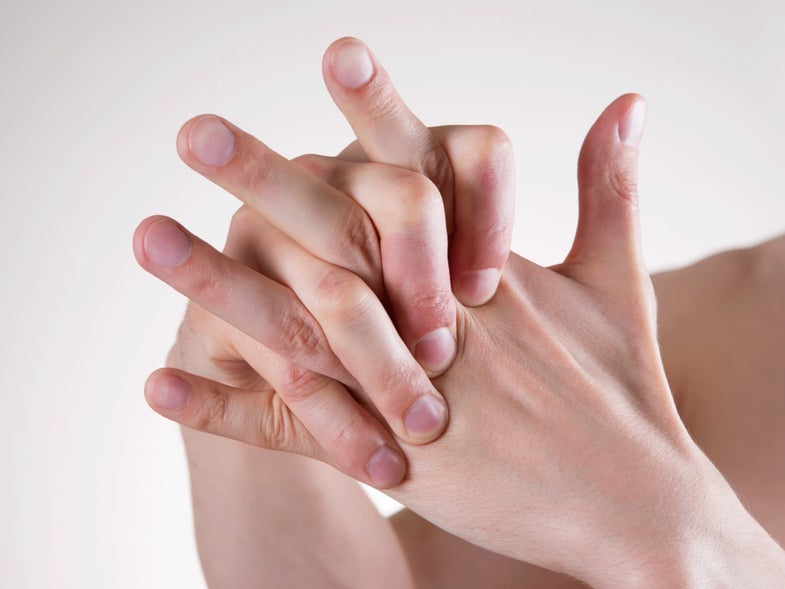 This post has been updated. It was originally published on October 9, 2018.

When he was a child, Donald Unger’s mother and aunts warned that he shouldn’t crack his knuckles, because he would develop arthritis. To prove them wrong, he set out on a half-century long experiment, cracking the knuckles on his left hand at least twice a day, while leaving the right knuckles (mostly) uncracked.

After 50 years, Unger (then a doctor in Thousand Oaks, California) examined his hands—and found no evidence of arthritis in either one, and no other differences between them, either. He wrote to the journal Arthritis & Rheumatology with his findings in 1998. “This preliminary investigation suggests a lack of correlation between knuckle cracking and the development of arthritis of the fingers,” he wrote.

This particular “study” wasn’t exactly scientific—a sample of one isn’t nearly enough to reach a a research-backed conclusion for the entire human population, and Unger wasn’t a neutral observer. But since then, there’s been more rigorous research conducted into the same question, and it’s to largely the same conclusion: Cracking your knuckles probably won’t give you arthritis.

Kevin DeWeber, a sports and family medicine physician at PeaceHealth Southwest Medical Center in Vancouver, Washington, ran one such study—largely because he, too, is a knuckle-cracker. “I’ve been cracking my knuckles for my whole life. Once I developed a scientific mind, and once I got a job that put me in a position where I could do some research, I looked into it,” he says.

The study, published in the Journal of the American Board of Family Medicine in 2010, looked at x-rays of the right hands of over 200 people. About 20 percent of those people reported that they cracked their knuckles routinely, but they were not any more likely to have arthritis in their hands than the people who did not crack their knuckles.

Despite the results of that study and a handful of others, all reaching the same conclusion, the myth that knuckle-cracking will lead to arthritis persists. Why? DeWeber thinks the fracturing sound might have something to do with it. “Knuckle cracking is really annoying to the people who are not doing it,” DeWeber says. “The people who are annoyed want it to stop, so they come up with a story that will dissuade the knuckle-cracker.”

That fictitious story isn’t entirely unreasonable, DeWeber says, even though it’s probably wrong. Joints crack because tiny bubbles of air form in the fluid that surround them, and then rapidly collapse, producing the distinctive sound. Bubbles form and pop in a similar way in ship’s propellers, and in that environment they do cause damage, so it’s possible to make the argument that they’d harm joints, as well. “But the mechanics of a ship’s propellor and the mechanics of a knuckle are different,” DeWeber says.

[Related: You can injure yourself stretching—but it’s not easy]

Trauma to a joint can be a risk factor for arthritis, and the loud sound of a knuckle cracking might sound to some people like it’s a traumatic event. “You’re doing something forceful, so it seems like it’s hurting the joint,” DeWeber says. “It’s a natural conclusion people might come to, but it doesn’t have any supporting evidence.”

DeWeber is careful to note, though, that there isn’t a 100 percent conclusive answer to the knuckle-cracking arthritis query. It’s pretty likely that it doesn’t, and there isn’t a scientific reason that could explain a connection between the two. But to find out for sure, scientists would have to assign people to be knuckle-crackers or non-knuckle crackers, make sure they stuck to their instructions, and follow them for most of their lives, to see if arthritis develops. That’d be incredibly difficult, DeWeber says, so the research we have now is likely the best we’re going to get.

Unger won a 2009 Ig Nobel prize, which honors silly (but still significant) science, for his query into his own knuckle-cracking habits. During his own de-bunking of a well-meaning parental warning, he also questioned some other decrees he was given as a child—like that eating spinach was important. Unfortunately for Unger, though, that one isn’t a myth.

Ask Us Anything
public health