The ultimate guide to hitting a home run

Let's nerd out about the physics of hitting a baseball as hard as you possibly can. 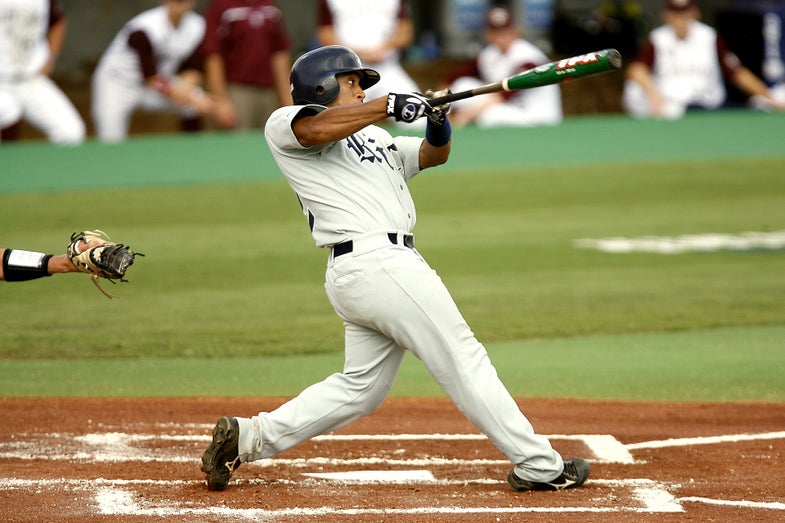 If ever there were a sport to completely nerd out about, it’s baseball. Geeks across America have been crunching data for years on what makes certain players or teams so great.

But most people don’t care whether one team has a slightly elevated chance of winning the wild card this year because their DH’s slugging percentage is off the charts. They just want to see some home runs. We dug into the gritty details to figure out exactly how to hit one. You can even try it out for yourself.

Use a composite bat

Wooden bats make a beautiful cracking sound as they hit a ball, but if you’re going for a home run (and you’re not a major league player), you should pick a composite bat. In order to get the ball to go farther, you have to make it come off the bat faster, and a key way to do that is to make the bat-ball collision as energy-efficient as possible.

A baseball already loses about half its energy deforming as it hits a wooden bat. If you watch in super slo-mo, you can actually see it squish to essentially half its width, then bounce back. That’s because wooden bats are solid, forcing the ball to do all the compressing in the relationship. But composite (as well as metal) bats are hollow. When the ball impacts them, they squish down a bit and then—and this is key—they bounce back out, returning some of that energy from the compression back into the ball. This is called the trampoline effect, and it’s the main reason that non-wooden bats outperform their tree-based compatriots by so much.

Oh, and get one that’s end-loaded

Whether you pick a light or heavy bat doesn’t end up having much of an impact on the batted ball speed (more on that later). Confusingly, the stat that really matters isn’t written on any baseball bat in any store in America. What you really want to know is the moment of inertia, which is essentially where the balance point of the bat is. Two bats with exactly the same total ounces can have very different moments of inertia and will feel different when you swing them. An end-loaded bat is harder to swing, whereas balancing the weight towards the handle makes even a heavy bat feel lighter, and thus you can swing it faster and control it more easily.

But here’s the key: “If swung at same speed, the bat with the larger moment of inertia will hit balls faster.” That’s according to Dan Russell, a professor of acoustics at Penn State who studies vibrations in baseball bats. “Moment of inertia matters way more than the weight, but no manufacturer lists moment of inertia, and I have no idea why. I’ve been asking that for 20 years.”

To figure out the moment of inertia on a bat, you can try to balance it on one finger. The closer you have to balance it to the wide end of the bat, the higher the MOI and the faster you’ll be able to hit the ball (assuming you’re strong enough to swing it at the same speed).

Pick a park that’s hot, humid, and at high altitude (bonus if the wind’s at your back)

Since your goal is to hit the ball as far as possible, you want the air to help you out as much as it can. Dense air produces more friction with the ball, slowing it down, so diffuse air is best. The air is already less dense at high altitudes because there’s less atmosphere above the ballpark to compress the gases all around you. Heat will also help, since the molecules will spread apart, and humidity will mean light water molecules will displace heavier atoms, further aiding your ball’s trajectory.

All these changes probably only give you a few feet more, but that can be the difference between a pop fly and a homer. For even more help, having even a five mile per hour breeze blowing the ball toward the outfield can tack on another 18 to 20 feet.

Get a ball with low-profile seams

Yes, that’s right, even the seams matter. Baseballs are held together by stitching, and having flat seams will make the ball travel farther because there’s less drag as it flies. Just by lowering the seam height a fraction of a millimeter, you can get another 10 to 15 feet out of the ball. Shell out the extra bucks for the Official MLB balls—they have the lowest seam profile available.

Swing as fast as possible (or: swing a heavier bat)

As we’ve been saying, the most important thing about your swing is simply how fast it is. The faster you swing the bat, the faster you make the ball go, and the farther it travels. Alan Nathan, a professor emeritus of physics at University of Illinois at Urbana-Champaign, says for every one mile per hour you add to the ball’s exit velocity, you get another five feet.

In theory, if you could swing every bat at equal speed, you’d want to get as heavy a bat as possible. You’re trying to reverse the ball’s momentum—it’s coming at you, and you want to change its direction. Momentum is just mass times velocity, so at a given speed you want a heavier bat to increase its momentum, thereby changing the ball’s momentum as well. Heavier bat; more efficient swing.

There’s just one problem. “At some point, you simply can’t swing a bat fast enough to make up for the increased weight,” explains Nathan. “You lose more in bat speed than you gain in having a more efficient swing.”

Your ability to control the bat is also reduced with a heavier bat, but let’s assume that you’re only hitting fastballs thrown straight over the plate for simplicity’s sake.

For most standard players, the weight is really just about preference—the trade-offs of having a light versus hefty bat cancel each other out. You go heavy, you swing slower. Go light, and your swing speeds up. Assuming you don’t care so much about maneuverability, though, your ideal bat is the heaviest one you can swing real fast.

Hit the ball right on the sweet spot

Since you’re aiming for the most efficient bat-ball collision possible, aim to hit with the bat’s sweet spot. All bats vibrate when something hits them—that’s why you feel a sting in your hands when you’re batting—but those vibrations represent lost energy that could have gone into increasing the ball’s speed.

The sweet spot is a complicated idea, and it’s not even really a single spot: there’s sort of a sweet zone about two inches wide on every bat where there are no vibrations produced. This has to do with the way waves (vibrations are a kind of wave) travel through solid objects. Suffice to say that all solid objects, including tennis rackets and hockey sticks, have these nodes where they won’t vibrate at all if struck. Everywhere else, they vibrate. On the ultra high-speed cameras inside major league parks, you can actually see these vibrations (Nathan’s page has a bunch of them)

You can find the sweet spot on a wooden bat by holding it by the knob and tapping it with a baseball all along its length. If you’re hitting hard enough, you should feel vibrations most of the time, but about two-thirds of the way to the end there will be a small area where it will feel more solid, and the bat won’t vibrate at all. That’s the sweet spot.

Angle the ball between 25 and 30 degrees

So, once you’ve picked the right ball and the right bat and the right stadium, and you’ve swung as hard as you possibly can, all you have to do is nail the angle. Nathan says the optimum launch angle is between 25 and 30 degrees (above parallel with the ground). That’s the right balance between having the maximum distance traveled and still having enough lift for the ball to exit the park.

And voila! You’ve hit a home run. Next up: the majors.