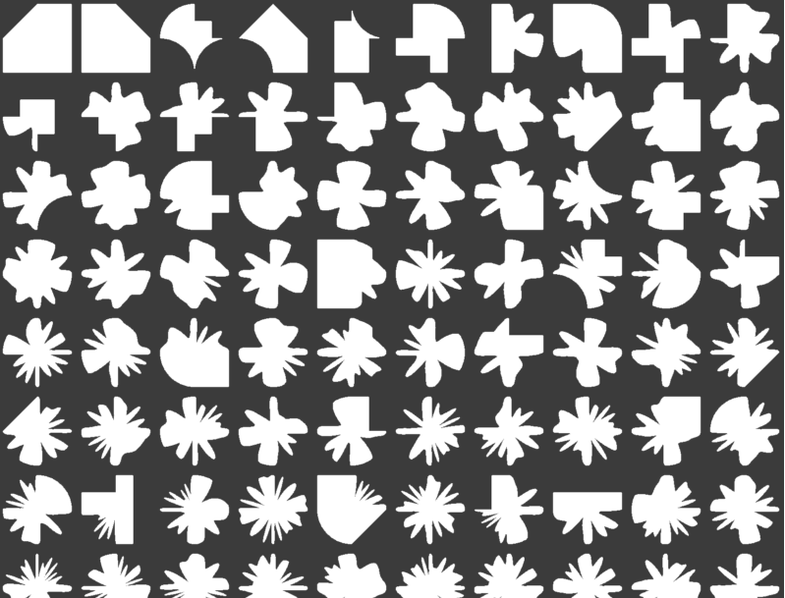 Look at these shapes for a few seconds. Then close your eyes, and try to imagine how they look. Try to take the mental image of one of them and break the shape into pieces in your mind, or combine it with another shape to make something new.

Cognitive scientists hypothesize that our ability to imagine, to come up with mental images and creative new ideas, is the result of something called a “mental workplace,” a neural network that likely coordinates activity across multiple regions of the brain. A new study from scientists at Dartmouth College paints a fuller picture of this mental workspace by imaging the brain regions involved with mentally manipulating images, like the shapes above.

“Our lab is very interested in the kind of flexible cognitive behaviors that humans have,” lead author Alex Schlegel, a Ph.D. student in cognitive neuroscience at Dartmouth College, tells Popular Science. “We can learn new things, we can think of new concepts, seeing things from different perspectives–a lot of this has to do with a very rich mental space, kind of a mental playground.”

Shlegel and his colleagues asked 15 participants to look at pictures of abstract shapes, then recall the shapes in their imagination while they were undergoing an fMRI scan. Some participants concentrated on maintaining the image of the shape, while others were asked to change the images in their mind, either imagining deconstructing the shapes into requisite parts or combining them with others to make a new shape.

The researchers expected the mental manipulation activity to involve the visual cortex, the part of the brain that processes imagery. By looking at activity in the visual cortex, scientists in the past few years have been able to decode the type of image that a person is imagining–something scarily akin to mind reading. But the visual cortex wasn’t the only region involved–they found 12 “regions of interest” that seem to be involved in manipulating imaginary shapes. “We saw differences in activity all over the brain when we compared to control conditions,” Shlegel says. “It does seem rather than being a single area responsible for imagining or manipulating, it seems like lots of areas have to work in concert.”

Though the study was small and only explored imagining visual shapes, it provides support for the kind of widespread neural network of imagination that other scientists have suggested exists, but haven’t seen in action before. Further studies will likely need to continue exploring how these neural networks function, but the researchers suggest a mental workspace could be integral to humans’ flexible cognitive abilities. “What we’re starting to show is that eventually, when we start to get to these complex cognitive behaviors, we need to start looking away from isolated areas,” Shlegel says, “but rather how the brain acts as a whole.”

The paper appears in this week’s Proceedings of the National Academy of Sciences.