What an odd idea, engineering biology to behave like photography. But that’s what the students from University of Texas at... 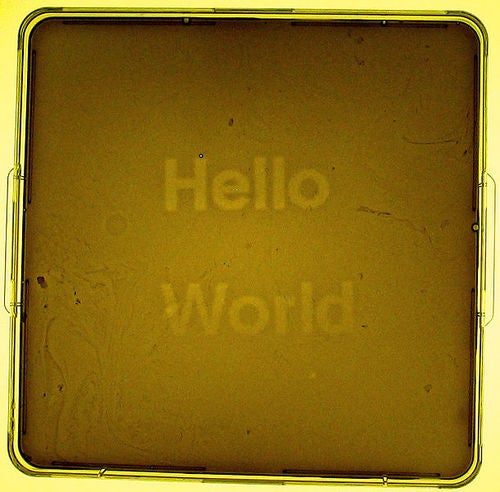 What an odd idea, engineering biology to behave like photography. But that’s what the students from University of Texas at Austin wanted to do—project an image onto a dish of E. coli bacteria, and have it develop like a print in the darkroom.

The team proposed this idea at the first ever International Genetically Engineered Machine competition, a college contest to bioengineer the coolest, most useful organism. It was November 2004. In a decade iGEM would swell to 245 teams in 34 different countries. But at that point, the name hadn’t been conceived and there were only five teams.

In a lecture hall at Norton’s Woods, a tree studded retreat in Cambridge, Massachusetts, all of the novice teams appeared to be flubbing it. Imagine going to a science fair and every kid saying, ‘I didn’t actually finish,’ or ‘none of my experiments actually worked.’ One-by-one the teams stepped onto the podium. One-by-one they described how their plans failed.

One student even forgot his lines. He pointed to the protein on the overhead projection and blurted, “What the f–k is that one again?”*

More than bruised student egos, the reputation–and possibly even the fate–of the inchoate field of synthetic biology hung on that competition. The organizers, all synthetic biologists, conceived of iGEM to test a set of principles that mainstream scientists thought were naïve. They believed that they could apply concepts from engineering to reassemble and reprogram life in the same way that engineers reassemble and reprogram machines. They went so far as to replace biology jargon with terms from electrical engineering. Genes with coupled functions became “genetic circuits;” and living cells became “chassis” as if they were car frames. Synthetic biology would allow anyone to engineer organisms, even undergrads.

The mounting failures onstage seemed to undermine these mainly theoretical principles, that is, until the Austin students stepped up. The students intended to modify the bacteria to detect edges of light and dark, but they hadn’t gotten that far. They’d gotten far enough though. They projected “Hello World” on screen overhead written in a plate of photographic bioengineered bacteria. The auditorium thundered with cheers and claps. “Hello World” announced that the principles of synthetic biology were real. Even more, it demonstrated that barely-trained students could successfully do bioengineering within iGEM’s seemingly impossible three-month time frame.

It was a Helen of Troy moment: the image that launched a thousand ventures, the image that sparked thousands of students and laypeople to say, ‘Wow, I can do this.’

Technology and culture operate on a continual feedback loop. A change in one prompts a change in the other, which in turn doubles back and changes the first. A lot has happened since “Hello World.” According to the latest numbers, the United States and Europe invested over $600 million in synthetic biology research; more than 15 grassroots-based community labs sprung up across the world to offer biotech tools and training to anyone; and this year, biotech IPOs have raised more than $2.5 billion, the second busiest year in over 30 years in what many say is a bubble, according to Forbes.

We only have the slightest notion of what these changes mean to our future. We all know that biotech is rapidly advancing in medicine, agriculture and industry. But it’s also branching into art, architecture and pop culture.

I hope this blog will serve as a forum to explore the ways in which it is changing our world and our understanding of life—spanning from the latest biotech breakthroughs to the myths and stories we tell ourselves, to the communities that gather around the technology. If you have ideas for articles, send a note to biohackersblog@gmail.com.

One last twist to the iGEM story: flashback to the darkroom at UT Austin the night before the competition. The students put the plate of bacteria under the lamp to process the image. But the bulb stained the medium in the dish, which happened to be photosensitive. The students had spelled out “Hello World” in light-sensitive agar rather than bioengineered bacteria.** The letters were what biologists call an artifact of the experimental conditions. In other words—a goof.

The students eventually worked out the kinks after the competition, but it didn’t matter. The image was already out there.

*That student, Jason Kelly, would eventually go on to cofound Ginkgo Bioworks, one of the premier synthetic biology companies.

**The bioengineered bacteria did actually function, but it was masked by the photosensitive stain in the agar.