The Science Of Getting On ‘The Price Is Right’

Your odds aren't as bad as you think, and some enthusiasm could put you over the brink. 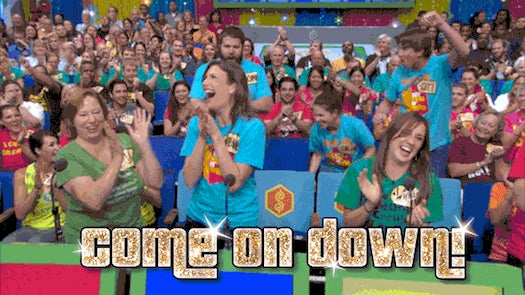 Over at Deadspin, Ben Robinson has outlined a plan that got his girlfriend on “The Price Is Right.” It’s like Moneyball, but with Drew Carey, and with Cliff Hangers instead of an actual sport. The story is hilarious, and there’s some cool, scientific thought put into it. Case in point, Robinson’s six-phase system:

PHASE 1: While watching that month of episodes, record the general appearance, estimated age, enthusiasm level, and custom-shirt-having-ness of every called-down contestant to A) generate demographic breakdowns in an effort to build a predictive model, and B) figure out if the producers have some obvious bias against giant beards, which would mean I’d had to shave.

PHASE 2: Make spreadsheets documenting the price of every single item and showcase for that month, plus what every contestant bid on them.

PHASE 3: Convince my brother-in-law in San Diego, who knows actually how to make spreadsheets, to make those spreadsheets.

PHASE 4: Get custom T-shirts designed and made, and pay the designer with a six pack of those cool Guinness bottles with the nitro-widgets.

PHASE 5: Track down anyone who’s ever been on contestants’ row, especially those who have won prizes, and extract all possible knowledge from their uniquely excitable brains.

A month later, it’s the day of the show, and they’re on set. Robinson and his group sit down with a producer for an interview that will pluck the contestants from the rest of the crowd. Out of the 300-person audience, nine people will be chosen for greatness. Robinson makes a sociological guess at their odds:

Still, her point is that most people clam up during the interview, and at least half don’t even really want to get on—they just want to be in the audience, away from their boring lives, watching other people win designer clutches. I realize we do have a pretty fantastic shot: If ambivalence wipes out half of the audience, we’re down from 300 to 150. Not a bad start.

My demographic breakdown of the shows tells me that among the nine contestants each time, there are three to five Young People slots. These can be partially eaten up by young people who belong to other attractive categories: brides, grooms, birthday boys or girls, military, people pretending to be any of these. Still, on a weekday during the school year, less than a third of the audience is going to be suitably youthful. So now I figure we’re competing with 50 people, give or take. And there are four of us.

There’s also an undeniable tendency for at least two—and possibly four—of the Young People to be attractive girls. I like to think my girlfriend qualifies, and it’s unseemly to have an opinion about my sister, but it’s safe to say she doesn’t look like me. This could really happen.

And happen it did. After some shenanigans, Robinson’s girlfriend made it on and won some pretty solid prizes.

So how much, exactly, did Robinson’s game plan help? Hard to say. If Robinson’s odds were right, his team had a pretty good chance of getting a slot just by showing up, and unlike your more-traditional laboratory science experiment, this wasn’t exactly a double-blind, control grouped process. The shirts and enthusiasm might have made all the difference, but the group might’ve just been Lucky Attractive Young People.

Anyone want to try replicating the results?