A study shows how fast food chains' logos are enough to light up pleasure centers in children's brains. 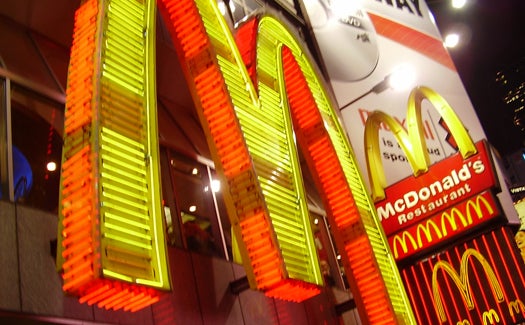 This new study sounds a lot like a 21st-century redo of Pavlov’s experiments with dogs: show kids the McDonald’s logo and watch their little neurons light up like the Fourth of July. The University of Missouri-Kansas City and University of Kansas Medical Center showed 10- to 14-year-olds more than 100 brands, then watched the results in an MRI. It showed their reward and pleasure centers flaring when they saw logos for food companies.

The brands they showed weren’t always food brands, but when they were, they got the same results as showing actual food. From Sun News:

Researcher Dr. Amanda Bruce says children are more likely to choose those foods with familiar logos, and a majority of meals marketed to children are high in sugars, fat and sodium.

Bruce told QMI Agency that the brain scans showed reflexes to logos are not much different than when a child is shown images of actual food.

“Similar areas of the brain are also implicated in obesity and various types of addiction, including drug abuse,” she said.

Good thing the advertisements are easy to avoid.