Why We Stand Where We Do In An Elevator

Elevator riders tend to arrange themselves into mini social hierarchies. 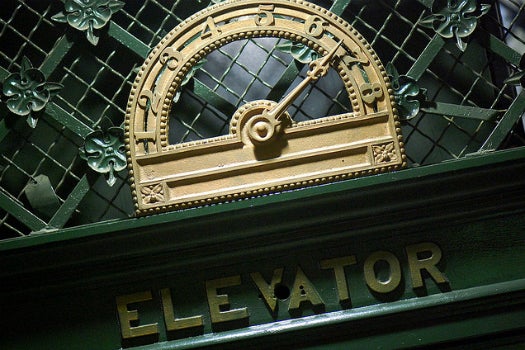 Rebekah Rousi, a Ph.D. student in cognitive science, conducted an ethnographic study of elevator behavior in two of the tallest office buildings in Adelaide, Australia. After taking a total of 30 elevator rides in the two buildings, she discovered there was an established order to where people tended stand.

There was also a difference in where people directed their gaze mid-ride: “Men watched the monitors, looked in the side mirrors (in one building) to see themselves, and in the door mirrors (of the other building) to also watch others. Women would watch the monitors and avoid eye contact with other users (unless in conversation) and the mirrors.”

In other words, men would check everyone else (and themselves) out during their elevator ride. Women, on the other hand, would only look in the mirrors when they were with other women.

Rousi wasn’t sure what to make of these results. Was the back of the elevator a position of power? She told NPR’s Robert Krulwich that analyzing the results as part of a power hierarchy seemed “almost too cliche.” It could be that people who are more shy stand toward the front, where they can’t see other passengers, whereas bolder people stand in the back, where they have a view of everyone else. Rousi says the topic begs further analysis.

While we’re at it, let’s get some more definitive research on why elevators are so awkward. And until proven otherwise, you can find me vying for power in the back of the elevator.