The Scientific Reason You Won’t Throw Your Stuff Away

Emerging research on hoarding classifies it as its own distinctive disorder, separate from OCD. 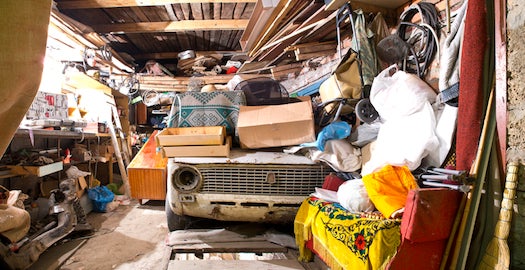 When my great-grandmother died in the mid-90s, we found a number of questionable collections in her house, including a paper bag filled to the brim with meticulously cleaned-out egg shells and a very toxic jar of mercury she had drained from old thermometers. In short: She was totally a hoarder. Had she lived to see the age of reality television, we could have put her on A&E’s Hoarders, which tracks the lives of people who obsessively collect and can’t bring themselves to throw things away, even to the point of creating dangerous, trash-filled living situations.

Though its not yet considered an official disorder, somewhere around 5 percent of Americans, or 15 million people, struggle with compulsive hoarding, as Bonnie Tsui noted in her in-depth look at the science of hoarding in Pacific Standard.

After years of being lumped in as a category of OCD, in May, hoarding will officially be recognized as its own distinct disorder in the Diagnostic and Statistical Manual of Mental Disorders (DSM), the standard tome of afflictions used by mental health professionals to classify mental health issues. The first systematic study of the disorder wasn’t published until 1993, as Tsui points out, but like the amount of junk in my closet, the field is starting to grow.

Though the research is still preliminary, studies have shown hoarding is related to cognitive differences in processes like decision-making, sorting and categorizing. In fMRI studies of people with hoarding disorder, the areas of the brain associated with decision making lit up more when making choices about material objects, showing more emotional engagement with items than usual. Another study found that hoarders find it more difficult to make decisions about their own possessions than someone else’s.

Bad news for me: It’s probably genetic. Bad news for all of us: it seems more prevalent in the U.S., where we sure do love our stuff:

There is no question that the continuous acquisition of stuff is the backbone of American culture. According to Sandra Stark, of the Peer-Led Hoarding Response Team at the Mental Health Association of San Francisco, “Seventy percent of home-owning Americans cannot park cars in their garages because there’s too much stuff; one in 10 has a storage unit.” … In San Francisco alone, nearly $6.5 million is spent by landlords and service agencies each year on hoarding-related issues, which include eviction and the removal of children or the elderly due to health and safety concerns. Hoarding has been identified as a direct contributor to up to six percent of all deaths by house fire.

There are even different types of hoarding:

Monika Eckfield, an assistant adjunct professor in the department of physiological nursing at UCSF, has noticed two patterns of behavior in the course of her research. She calls one type of hoarder an “impulsive acquirer,” someone who actively acquires things for the thrill of it and keeps items because they reflect personal interests; she calls the other type a “worried keeper,” someone who tends to be more depressed and anxious, acquiring things passively and keeping them as a safeguard against potential future need. A worried keeper spends considerably more time trying to sort and organize belongings than an impulsive acquirer, and also feels more frustration with his or her living space.

Though the problem is getting more recognition, researchers are still working on an effective treatment. The cognitive behavioral therapy used to treat OCD has shown itself fairly useless when it comes to hoarding, and the treatments that do exist are expensive, involving months of work with clinicians and home visits.

And hoarding may even have somewhat of an upside, too:

The physical world of hoarders, Frost has observed, is much more expansive than what the rest of us perceive, and is often free of the rules that we are wont to impose. Even more intriguing, Frost told me that some of the neurological hallmarks of hoarding might indicate a giftedness in the aesthetic appreciation of the physical world, rather than pure illness. One of his patients had a pile that built up in the middle of her dorm room over the course of a week; she started perceiving shapes, colors, and textures, and it became a work of art—something with aesthetic value. “She couldn’t dismantle it, because that would destroy it,” Frost said.

The whole piece is definitely worth a read over at Pacific Standard.