A new study finds women give longer and more confident political speeches when they are exposed to images of female role models. 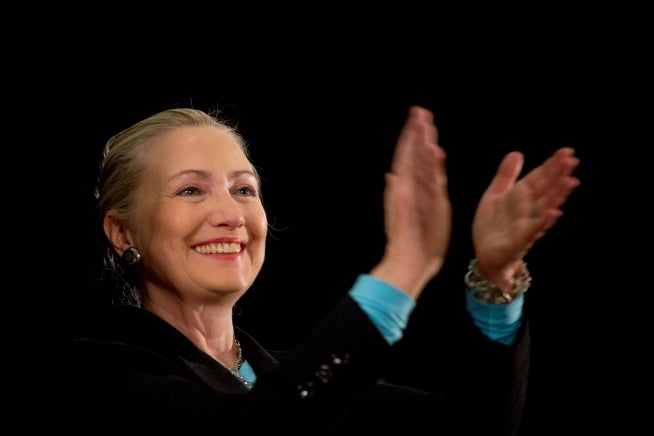 What do women in politics need? Strong female role models.

A new paper in the May issue of the Journal of Experimental Social Psychology suggests that even just seeing images of female role models can help women speak publicly and perform as leaders.

Previous research has found that the presence of female leaders in government has a significant effect on girls’ educational goals, and seeing other women in STEM careers can help women want to pursue those careers themselves. However, other studies have found that seeing high-level female leaders can actually make women feel inferior about their own leadership qualities.

To dig deeper, scientists asked 149 students from a Swiss university (81 women, 68 men) to give a persuasive political speech against increasing student fees, within the context of a virtual reality program that put them in front of an audience of six men and six women. For some participants, the back wall of the virtual room featured a hanging picture of Hillary Clinton. For others, it showed a portrait of Bill Clinton or Angela Merkel, and for some the wall remained blank.

The researchers timed and videotaped the speech, then asked the students to evaluate their performance. A separate group of people unaware of the experimental conditions watched the speeches and rated them based on fluency and body language. 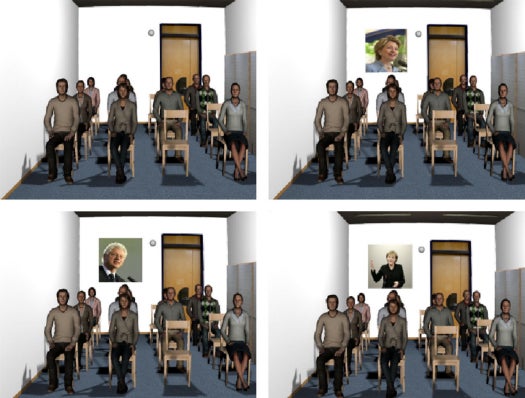 Both the people watching the speeches and those giving them perceived longer speeches as being more positive. When there was no role model in view, men spoke longer than women. The same held true for speaking under the withering gaze of Big Bill.

Female role models eliminated the gender gap, though. Women gave longer speeches and evaluated themselves more positively when they were primed with with images Hillary Clinton and Angela Merkel than when they saw Bill Clinton or weren’t primed at all. The outside observers also rated their speeches higher.

“Female political role models can inspire women and help them cope with stressful situations that they encounter in their careers, such as public speaking,” the authors write. “A lack of female powerful role models leads to a vicious circle, because if women fail to take leadership positions, they also fail to provide role models for junior women to follow.”

They go on to recommend that “active steps should be taken in order to increase the number of women in leadership positions, which would consequently increase their visibility and empower other women on their path to leadership.”