Researchers are plugging in smokers, alcoholics, and even crack addicts to expose them to a relapse environment--and teach them how to deal with it. Will it work? 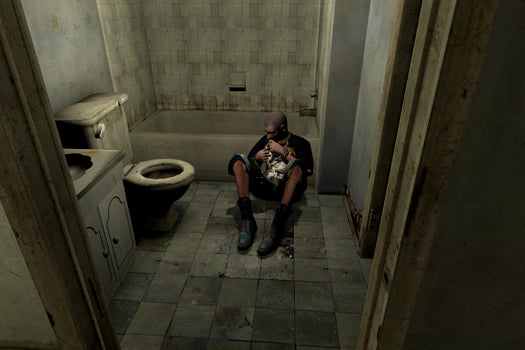 When the addicts enter the room, they haven’t met the people inside. They’ve never been there before, but the setting is familiar, and so is the pipe on the table, or the bottles of booze on the ground. Soon enough, someone’s offering them a hit, or a drug deal’s going down right in front of them.

They’ve been trying to get better–that’s why they’re doing this–but now they have cravings.

It’s about then that a voice instructs them to put down the joystick and look around the room without speaking, “allowing that drug craving to come and go like a wave.” The voice asks them periodically to rate their cravings as, after a couple minutes, they start to relax. The craving starts to dissipate and they hear a series of tones: beep-boop-boop.

It’s all being orchestrated by a wizard behind the virtual curtain: Zach Rosenthal, an assistant professor at Duke. For years now, with funding from the National Institute on Drug Abuse and the Department of Defense, Rosenthal has been running virtual reality trials like this with drug addicts in North Carolina (and veterans, hence the DOD funding) who are trying to recover. About 90 people, passing in and out of the NIDA study, have been coming to Rosenthal for treatment through virtual reality. They’re hooked up to a virtual reality simulator and dumped somewhere (a neighborhood, a crack house) where the researchers can slowly add cues to the environment, or change the environment itself, altering the situation to based on each patient’s history and adding paraphernalia (drugs, a crack pipe) as necessary.

The idea is that people will develop coping strategies, then take those strategies back to the real world. With coping mechanisms in their tool kits, users will get better, faster. But just because someone says no in a fake world, does that mean he’ll say no in real life?

Rosenthal’s research employs a methodology called virtual reality cue reactivity. Put simply, that means using virtual reality to trigger a reaction, then to monitor that reaction. In substance abuse treatment, that usually involves transporting addicts to a software artist’s representation of a drug den or party and teaching them to deal with the situation.

Patients, after all, could still see they were in a lab, and they might not be able to bring the coping mechanisms outside that environment.While virtual reality cue reactivity is a relatively new methodology, cue reactivity is not. Its best-known incarnation is in treating phobias: to help, say, arachnophobics, researchers will show them a brown dot, then a fake spider, then a real spider in a jar, then a real spider freely crawling around. The patients slowly acclimate to seeing a spider until they’re comfortable. Cue: spider; reactivity: person freaking out.

“Acclimating” roughly approximates what happens with addiction treatment, too. The theory: when addicts enter a simulacrum of the environment they’ll have to face in the real world, they’re able to safely learn coping techniques–to develop the strength to refuse drugs, despite cravings.

In decades past, researchers would try to treat smokers and alcoholics using real-life triggers. Show the addicts a lighter or an empty bottle, or even a photograph of something associated with smoking and drinking, to trigger cravings, then teach them coping strategies. It seemed to work, to some degree, but it was limited. Patients, after all, could tell they were in a lab, and they might not be able to transfer the coping mechanisms to an outside environment.

That’s where virtual reality comes in. It’s still only an approximation of reality, but researchers believe it has some advantages over earlier forms of treatment. For one, the immersiveness of the environment–a created world, in which almost anything can be a trigger–helps patients better transfer what they learned in the lab to the real world, researchers say. For another thing, the environments and triggers are minutely customizable. A smoker who always stood outside a coffee shop with a cup of joe can have that coffee shop and black coffee recreated. An addict describes his history of drug use and artists render it. So an alcoholic might approach a bar and ask for a Budweiser in a can–and get exactly that, reproduced right down to the label. Some teams are even capable of simulating smells, like cigarette smoke. At least one study found smokers were more likely to quit when given the virtual reality treatment.

Until recently, most experiments in the field dealt with smokers and alcoholics. They also dealt more with research than with treatment: scientists were working to establish that cravings could be induced in virtual reality before they tried to treat anyone through virtual reality.

Patrick “Spike” Bordnick is a professor and associate dean for research at the University of Houston, who focuses on addiction and virtual reality. He started his research because he got frustrated with the limits of traditional cue reactivity (the reality-based kind): “I started looking in the lab one day and thought, the environment, the context is off… no one’s ever smoked in this lab.” Bordnick and his team did some of the earliest work on the topic, first proving that virtual reality could trigger a craving in nicotine-dependent people. Later, they upgraded their technology to include devices that produced smells, like cigarette smoke, and more easily manipulated software. 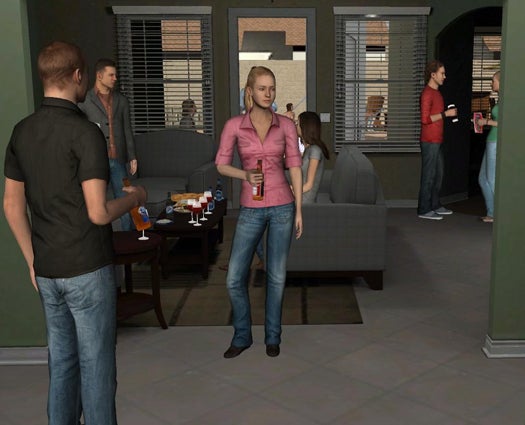 Amy Traylor, an assistant professor at the University of Alabama who’s worked with Bordnick and conducted virtual reality studies of her own, says “the thing we don’t really take into account [with traditional cue reactivity studies] is that the environment itself can serve as a cue.” And Traylor says the patients, even if they still realize where they really are, buy it. Both her and Bordnick bring up a subject who tried to reach out for a virtual drink while strapped in to the machine.

Most of those studies just test craving–they don’t go so far as to treat addicts. Now, though, researchers have started looking at testing and treating addicts’ cravings for drugs like crack, cocaine, and heroin through virtual reality. The big question: Is it more effective than more traditional treatments?

A feasibility study by Bordnick took 46 adult smokers and put them through a 10-week treatment program. One group used virtual reality treatment and nicotine replacement therapy (like gum and patches) while the other group got only the nicotine replacement therapy. The study found that, for the VR therapy group, “[s]moking rates and craving for nicotine were significantly lower.”

But that’s just one study. And the technique is still way too new–and the scientific literature way too sparse–to declare virtual reality some sort of junkie panacea.

Not that that’s the point. Researchers prefer to think of virtual reality treatment as a complement to other, more traditional treatment methods, like counseling, medication and rehab. Rosenthal makes the point that even if virtual reality is only as reliable as reality-based cue reactivity, the method could still be useful–by acting as an alternative for people who don’t react to the standard form of exposure to paraphernalia. (He has a study with crack addicts, but it’s still underway, so he doesn’t have complete data to present yet.) Traylor echoes that. She points out that virtual reality cue reactivity research into phobias makes otherwise unfeasible research feasible: someone with a fear of flying can be virtually put on a plane.

Bordnick summed up the process like this: “If I wanted to teach you to ride a bike, I could show you a video of a bike.” That could work, “but wouldn’t it be better if I could actually get you on a real bike?” It could be–it likely at least works in some way–but it’ll take some more studies to prove how much better. Right now, after seeing success with smokers, Bordnick is moving on to an environment for heroin, which he says is the team’s most realistic yet. 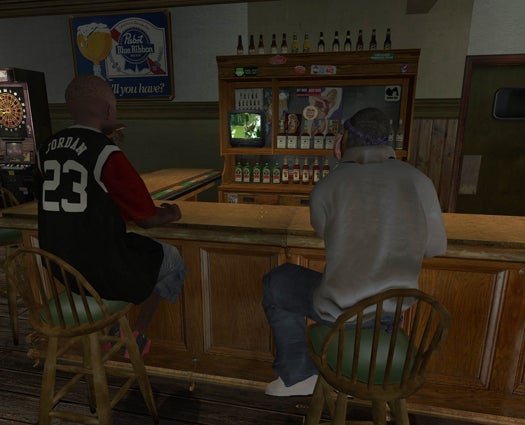 There are other advantages. Researchers can build an entire bar to simulate a drinking environment (and, in fact, they have), but it’s more economical to use a virtual environment, where fake components get plopped into place–no moving parts necessary.

Until we find out exactly how effective virtual reality cue reactivity is for treating substance abuse, Rosenthal is supplementing his research with more traditional (but still novel) methods. Subjects in his virtual environment are played electronic blips after they start to come down, and later, when they get cravings in the real world, they can call a number to hear the tones again, assuaging the craving. That’s a parallel for how virtual reality cue reactivity will likely be used: as a secondary world, not a replacement for the real one.