The king behind Machu Picchu built his legacy in stone

In lieu of a written language, the Inca communicated through construction. 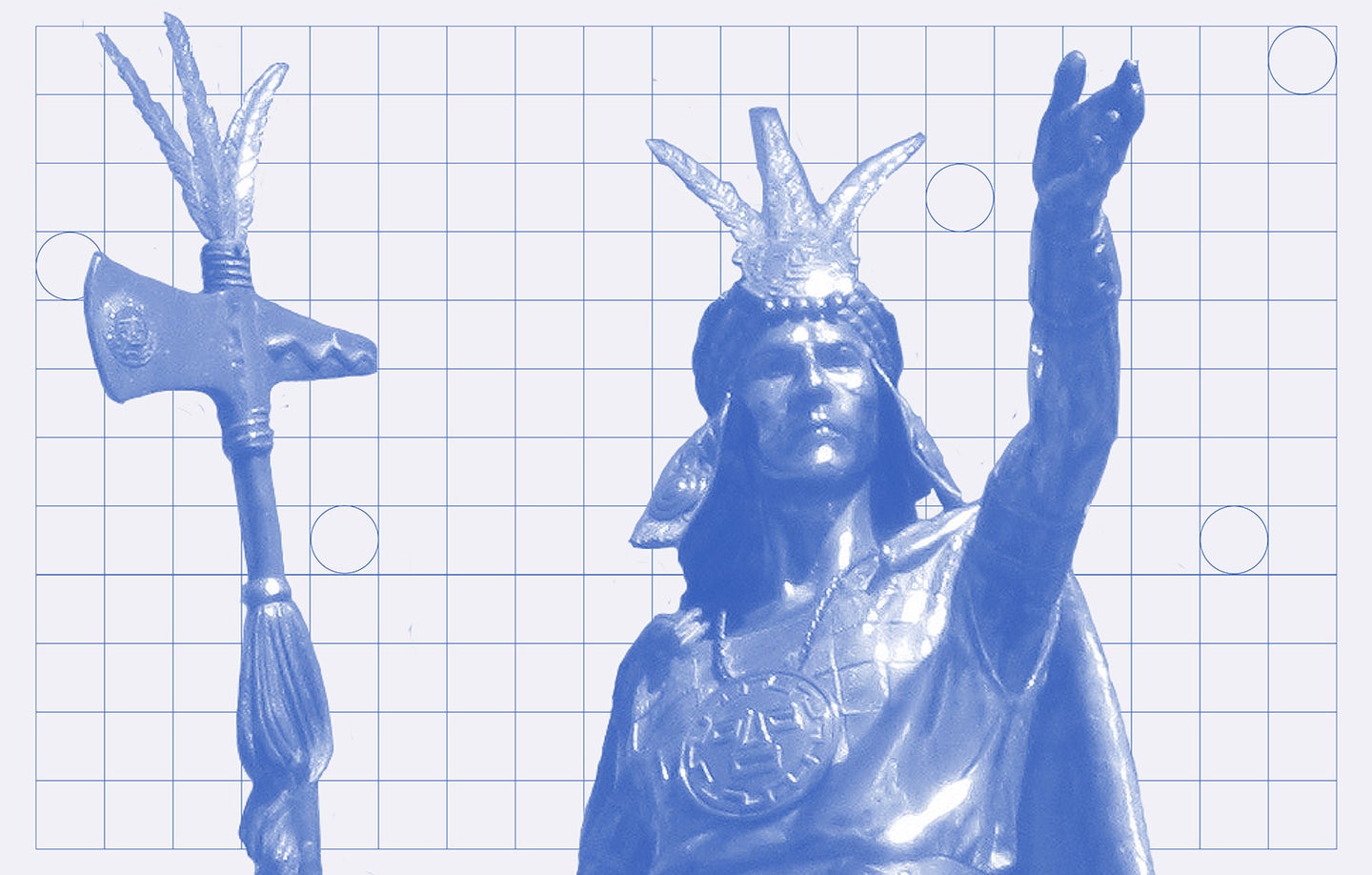 A statue of Pachacuti. Pexels; Illustration by Katie Belloff
SHARE

Popular Science’s new series, The Builders, takes you behind the construction tape to reveal the individuals responsible for history’s greatest architectural works.

Glance at an Incan brick, and you’ll notice there’s very little that’s conventionally bricklike about it. There are no right angles, no proper corners. And it’s not a rectangle at all, but a trapezoid: one side wider and squatter than the other. Look at another. Then another. Then another. No two are exactly the same, each a polygonal version of the unique rock it started as.

Carefully stacked together like a 15th-century game of Tetris, these seemingly haphazard blocks have withstood 500 years of disasters, both natural and human. The signature style of the pre-Columbian empire, these stones marked the Inca expansion some 2,500 miles down the backbone of South America. The sprawl took just a few decades, propelled by the strength of a man named Pachacuti, the ninth Sapa Inca (the indigenous Quechua term for “king”). His most impressive building project was Machu Picchu, a 200-building, mountain-hugging summer resort for the ruler and his extended family. But this wonder of the world is just one place where Pachacuti carefully recorded his legacy—and building concepts that continue to help us create more-resilient cities—stone by stone.

Born in 1438 as Cusi Yupanqui, Pachacuti didn’t plan his rise to power. When the Chankas, an enemy ethnic group invaded, his father, then king, and his brother, the future ruler, retreated. Cusi Yupanqui had to defend the Inca’s fertile Peruvian valley alone. The puma-shaped crown city of Cusco occupied a sacred spot in between two forking rivers, and the Chankas wanted to call the prestigious place their own.

As the Chankas made their way toward the gold-plated Temple of the Sun, part fortress and part temple, Cusi Yupanqui led his men into a battle so ferocious that the stones beneath the warriors’ feet rose up to fight alongside them—or so the story goes. In the aftermath, the victorious Inca rechristened their leader Pachacuti, or “Earth Shaker.” After his brother’s eventual murder and his father’s death, Pachacuti ascended the throne as the sole king of Cusco.

Unsatisfied with this one little valley, he set about conquering swaths of the Andes, knitting together lands in the vast quilt of the expanding Inca Empire, which at its zenith stretched from Quito, Ecuador, in the north, down a long coastal strip to Talca, Chile in the south. The Inca laid roads and raised cities among diverse natural ecosystems, from the Atacama—the only desert drier than the poles—to the rainforests of Cusco to the flood zones of Machu Picchu. Everything they built, they built to last, with the aid of Pachacuti’s soldiers, engineers, and stones.

In colonizing the land outside Cusco, Pachacuti used architecture to “mark their presence on the landscape,” says Stella Nair, an art historian at the University of California at, Los Angeles, and an expert in indigenous art and architecture in the Americas. Absent a written language, he used construction to put his stamp on every conquered village, reminding potential enemies of his power. “The [Inca] are a really small population, and within 100 years, they conquer the western rim of South America,” Nair says. “You have to convey the idea that you’re there.”

The hallmark of their stonework is the trapezoid, a form that lends the structures extraordinary strength. Without modern earthmovers to dig foundations into bedrock or advanced metallurgy to imbue strength, the Incas wisely focused on shaping their buildings to their environment, instead of taking risks on the assumption their materials would hold up against earthquakes and other disasters. Each element, from an individual block to an entire building, is bigger at the bottom than the top, which forms sturdier foundations. Most structures were single-story: The squatter the building, the more likely it was to hold up. It’s also why most builders eschewed mortar: The paste holds bricks together, but in a seismic event, a bit of glue is meaningless. These clever strategies prevented earthquake damage, a pressing concern on the Pacific’s tectonic Ring of Fire.

Inca structures were surprisingly easy to assemble. With polygonal stones, there’s no reason to strive for individually perfect cubes. “When you’re working a stone, your most fragile part is your corners,” Nair says. “If you’re trying to make a rectangular block [and you break a corner], you just ruined your block.” Instead, a head wall-maker would direct a team of masons in matching the slopes of each new stone to the one that preceded it.

The Inca way of carving stone blurs the boundary between the natural and the man-made. “When they carve a stone, they’ll leave enough of the cortex to give some sense of its original shape,” Nair says. Experts attribute this both to the culture’s reverence for the landscape, and their desire to distort time and history to make it appear the Inca had ruled for longer than they had. Today, many indigenous people continue to build in the style of their ancestors. It’s at once an homage to this great legacy and out of necessity: Many descendants—modern-day Peruvians—live in poverty and make their homes of local stone and homemade adobe (the Spanish word for “mudbrick”).

RELATED: By destroying this female pharaoh’s legacy, her successor preserved it forever

Builders in the region continue to cap their stout structures with carefully woven reed roofs, though they’re considerably thinner than their ancestors. Thatching eclipsed two-thirds of each building, according to Nair. Some roofs were gabled, with opposing slopes, while others were hipped, in which all sides slope downward. Every one was like a three-dimensional textile, secured to the building with clever knotting (the Inca did not have nails).

Designs also followed a profound philosophical or spiritual principle. Builders selected sites based on their orientation to the natural world. “The Incas paid a lot of attention to where you can see sacred features from different spots,” Nair says. Mountain peaks, rushing springs, and spiritually significant rivers were not just premium views, but elements that defined the shape of entire complexes, even entire cities.

Pachacuti chose the location for Machu Picchu, a sprawling summer resort for his family and entourage, with great intention. It rises out of the Sacred Valley, where Inca culture originated, and overlooks the Urubamba River, which irrigated agricultural lands all the way to Cusco. But opting for this special location brought his builders new challenges. In addition to regular seismic activity, a constant flow of meltwater marks the Andes mountains; it pours downhill from its glacial origins, instigating landslides along the way. Machu Picchu’s wet season lasts roughly half the year, unleashing twice the annual average rainfall of the continental United States. “It’s just horrible if you want to think about stable landscapes to build on,” Nair says. But the hallowed nature of the site, combined with the temperate relief it provided in summer, was likely enough to convince Pachacuti to invest in such a perilous project.

To cope, the Inca rigorously surveyed the potential building sites, and developed tricks for stabilization. Machu Picchu’s structural stability comes from a series of 700 terraces, which still meet contemporary geotechnical standards for retaining walls. Like a set of stacked window boxes, they corralled water as it came rushing down the hills. The sturdy barriers prevented soil erosion, trapping dirt inside. The structures also provided flat arable land for growing crops, such as corn, squash, and beans—all essential for feeding the king’s 1,200-person entourage. Water still found its way into the heart of the complex, so engineers built 130 drainage holes into the walls of the royal city.

But preventing floods was only one of the architect’s goals. Residences cluster around drinking wells. At the top of the mountain, near a rushing spring, engineers dug a canal that stored freshwater, which then trickled down through the Stairway of Fountains. Pachacuti’s palace was at the topmost well and therefore received the freshest water, civil engineer Ken Wright told Nova. The municipal tap flowed down from there, always separate from the drainage system. The system could handle 25 gallons of water each minute to accommodate the spring’s peak flow—something Wright estimates the Inca likely calculated as part of a yearlong research and development phase before they began construction.

It’s that type of careful planning and rigorous technique that allowed Pachacuti and his people to thrive, wherever his empire expanded. That’s why architects, engineers, and enthusiasts still revere Inca designs to this day. We see their influence in the words we use: In 2010, meteorologists in alpine Europe named a method for measuring rainfall in mountainous areas the Integrated Nowcasting through Comprehensive Analysis, or INCA.

It’s also increasingly in the way we think. As drought wrinkles many parts of the Andean desert and climate change brings still-harsher weather to the region, researchers are reexamining Inca water-storage practices for insight into how we might survive our desolate future. In contemporary Cusco, where Pachacuti’s journey began, archaeologists are helping locals restore water-retaining terraces, which remain damp deep into summer. Smaller Inca strategies work too. By reintroducing gravel into the soil, farmers can prevent landslides without inhibiting growth. And by switching to local crops, which are already adapted to the regional climate, they can ensure a better harvest than less-hardy imported varieties.

Despite their long and revered history, the indigenous people of the Andes—the direct descendants of this ancient civilization—get short shrift. They’re displaced by new airports and growing hotel chains and other hidden costs of tourism. Many live in poverty. And, Nair says, among many Westerners with cable TV and YouTube access, wild theories about Machu Picchu’s alien origins are more popular than the very real Inca men and women who built these lasting monuments to their empire’s strength. Pachacuti’s legacy may be written in stone, but conspiracies zipping around the internet threaten to erase him.